By CapnCurry on 04/26/2013   Supporter
Baten Kaitos: Eternal Wings and the Lost Ocean 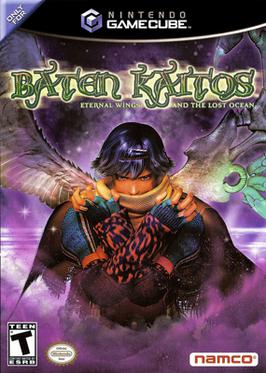 Just had a chat with an old friend of mine this evening, and whilst perusing Cheerful Ghost, I was reminded of some old friends I left behind in a video game once.

Baten Kaitos is a game with a couple of *really* unique mechanics. The first is that your items are stored in card format - everything from your armor to your weapons to your quest items are stored on cards. And I don't mean abstracted out for combat or gameplay, I mean the characters talk about needing to find a blank card to suck up the essence of something or other.

The second is that your cards evolve in real time. As in, if you pick up a card with a fruit on it (that you would use to heal someone in your party), and you stand around for an hour... that fruit will rot on the card. Likewise, ice melts into water, fire goes out, and peaches inexplicably turn into heroes called Momotaro after a number of hours (just leave the game running overnight).

But the third - and the one that really endeared this game to me - is that you're one of the characters. You, personally, the player. See, your title character Kalas has a link to a Guardian Spirit. This Guardian Spirit is a being from another world, who has a limited capacity to communicate and work with whoever's linked. Especially in terms of succeeding in combat and making pivotal decisions. You are the Guardian Spirit.

Now, this is a little meta and weirdly philosophical, but hear me out. With this Guardian Spirit mechanic, the characters are free to talk to you and about you without breaking the fourth wall. It's easy to think of your actions as more real, because you're not *controlling* the main character, you're just offering suggestions that he's all too happy to take you up on.

The net result was that I felt like I was actually part of the party, that I was role-playing a character who happened to be myself, and when I got my suspension of disbelief good and amped up, that the interactions between me and Kalas were governed not by the rules of the game but rather by the nature of the gap between our two worlds. At the end of the game, I found myself saying farewell to characters who had somehow become a kind of a friend. A week later, I felt like I should visit, so I played through the ending again.

Of course, this is a deeply personal experience and your mileage may vary. It might be that I played the game during a particular mental sweet spot that somehow let me recapture a six-year-old's wonder and imagination for one special round with a game.

Or... maybe there's something just a little bit magical on that tiny Gamecube disc.