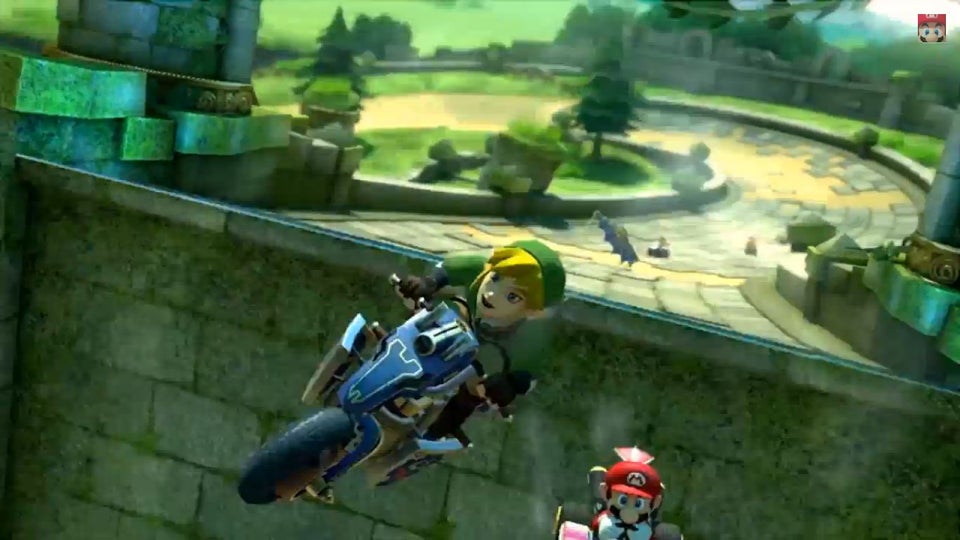 Mario Kart 8 is a really fun game for the Wii U and was released this summer. It includes new tracks, new characters, and much more in high-definition. The game also contains DLC which can be purchased at the Nintendo eShop. The first DLC that was released for the game includes Mercedes-Benz karts and is available for free.

The second DLC, The Legend of Zelda pack, has just recently been released. It includes three new characters; Link, Tanooki Mario, and Cat Peach. It also includes eight new tracks with two new cups. Four new vehicles are available with this pack and while searching for images of the game online, I saw an Epona vehicle.

The third DLC, the Animal Crossing Pack, will be released in May 2015. It includes three new characters; Villager, Isabelle, and Dry Bowser. It also includes four new vehicles and eight new tracks.

While the first DLC is available for free, the Zelda and Animal Crossing DLC packs can be bought together for about $12. Separately, each pack costs about $8, so getting the two-in-one pack is a deal. If you haven't played Mario Kart 8, now is a great time to get started. If you've already played the game, now is a great time to play it again with the new DLC.

I have not yet played the new DLC as I just recently purchased the two-in-one pack and am watching my son play. I've seen him race with Link on new tracks and with Yoshi (who comes in a variety of colors). I'm excited about the DLC because I think Mario Kart 8 is a great game. I really enjoyed playing the game when it was released this summer and I think the new DLC definitely adds more to the game and is worth purchasing.

Interesting as I don't remember Nintendo getting into the DLC business before. That said, I wished I could have extended the life of Mario Kart Wii a bit more and 8 new tracks per DLC sounds amazing.

DLC seems to be a new thing with Nintendo. Hyrule Warriors has DLC, which I purchased as well. I think it's cool that they've extended the life and play-ability of both games. It makes me wonder what could be in store for future games, especially Smash Bros., which comes out tomorrow (which I have pre-ordered along with two amiibo figures and the two new Pokemon Games for the 3DS). Oh, now I'm getting to talking about the new Smash Bros. for the Wii U. I saw that some of the original games that introduced characters will be playable from within that game. So, games within a game. I believe I also saw something that said they've already started working on (or planning for) the next console.

I just finished both of the new cups as Link on 50cc. It's really fun and I'm really glad Link joined the race. Still, it seems weird that he's in Mario Kart since he's not in Mario games. The first new cup is Yoshi Cup and the second is Triforce. In the first one, Wario's mine returned from the Wii version of the game. This time, anti-gravity parts were added and bumping into mine carts gives you an anti-gravity boost. There was also an Excite Bike track. The final track of the Triforce Cup is a Hyrulian themed track and is pretty cool. The gold coins were replaced with green rupees and the chomp plants were replaced by the ones we see in Zelda games. I also like the new The Legend of Zelda themed carts.

Using an amiibo with the game unlocks a Mii custom for whichever character the amiibo is. So, I unlocked the Link costume by using my Link amiibo.