It's Dangerous to go Alone 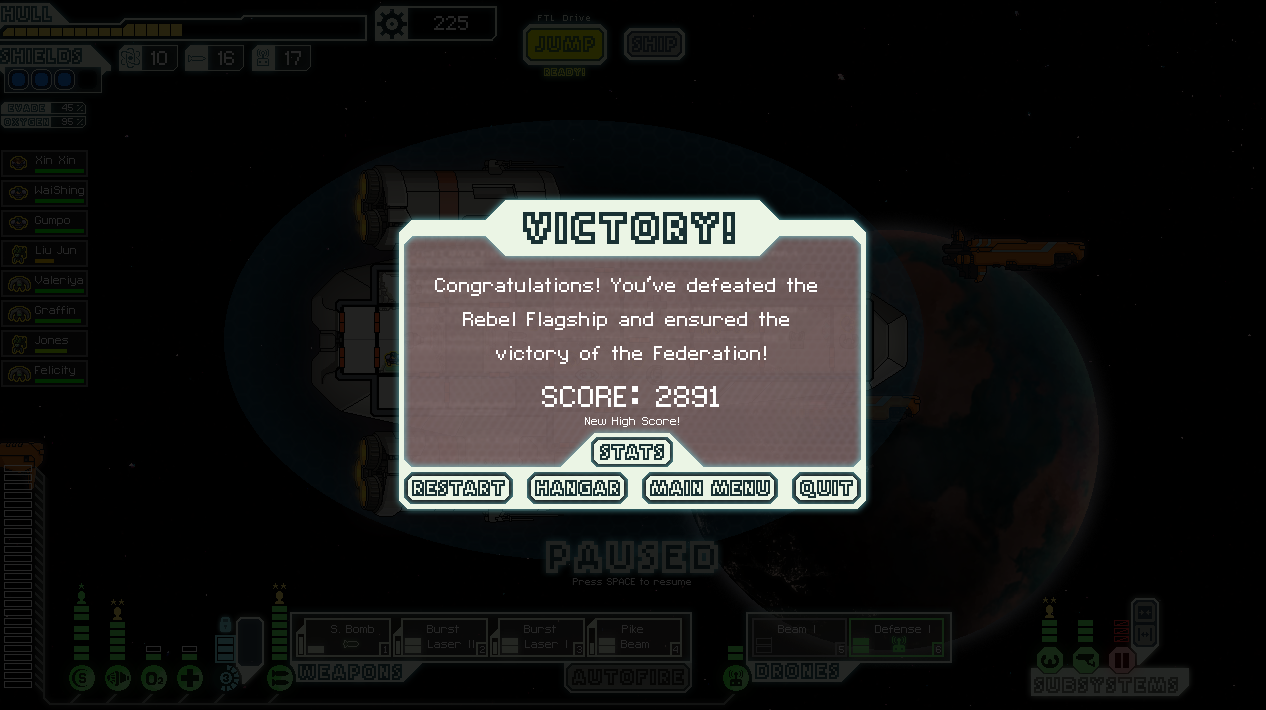 I've played something like a hundred FTL games. As of yesterday, I had won exactly once. Tonight, I had an FTL pairing session with the Cheerful Ghost himself, and we won. And not by a small margin, either - we picked up eight crew members along the way and lost none; our hull dipped into the red exactly once; our missile stock never got into the single digits.

Sure, we caught some lucky breaks, but nothing dramatically "wow". Our weapons bank was, by the end of the game, a small bomb, a burst laster I, a burst laser II, and a pike beam. Solid, but not world-shattering. Likewise our drones; we finished with a beam drone I and a defense drone I. Our final loadout was, by some standards, rather modest: while we did succeed in garnering 8 crew members, we didn't max out our shields, got just over halfway up the engine progression, and our augments were an FTL Jammer and a Scrap Recovery Arm. No, it was not our equipment haul that set this run apart.

What won us this game was our combined tactical and strategic prowess. jdodson, as a rule, pulverizes the enemy weapons bank before all else; I tend to focus on bringing down shields and engines - his strategy is the better one. I coaxed him into purchasing a cloaking device instead of fuel - we had a couple of close calls, but no fuel emergency, and the cloaking device saved our bacon more than once. When we got boarded by mantises, I turned our ship into a winding corridor of hopeless suffication; when we got boarded by drones he dispatched and managed a security contingent that dismantled the boarders with ruthless efficiency. In short, we were able to fill gaps in each others' technique that we didn't even know we had.

Beyond that, though, it was the most satisfying game victory I've had in recent memory. I went in to the last sector convinced we were going to fall just short of the mark. It wasn't until halfway through the battle with the rebel flagship that I truly realized how well we had all the bases covered between us.

jdodson and I invented FTL Pairing more or less on accident - I wanted to know what FTL was all about, and he offered to give me a demo via Google Hangout. I started asking questions about the ramifications of different choices, and he started talking out loud about what he was thinking - from there, we just naturally settled into playing the game as a pair. I think I'll be trying this technique with other so-called "single-player" games - not only is it a total blast, but it's the fastest way I've ever seen to learn a game (whether it's for the first time or the hundredth).

Many thanks to jdodson for hosting a stellar game of FTL, for showing me the true value of a shipful of mantises, and for building the event system that made it all happen. I, for one, will be scheduling my next adventure there shortly.