Minecraft gets a lot of love on this site (and rightfully 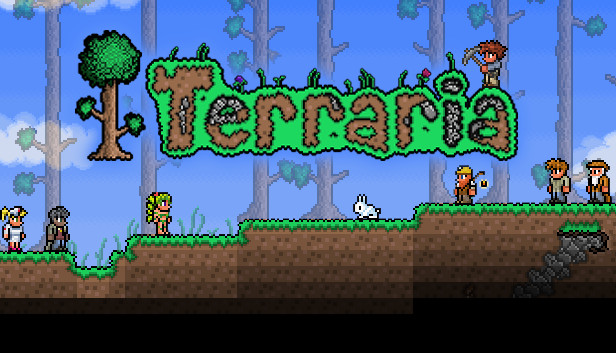 Minecraft gets a lot of love on this site (and rightfully so, that game is great) but I thought I'd bring up another, somewhat similar game. I picked up Terraria last summer during the insane Steam sales that were going on after a friend recommended it. I've heard some people call this game a Minecraft clone, and they do share similar themes, but really they are two very different games.

Terraria plays like a 2D action/RPG/platformer with a heavy emphasis on combat and crafting. While overall I like Minecraft better, there's a lot more "game" in Terraria. In Terraria as you build houses and meet certain criteria NPC's will move into your village. For example: Once you amass a certain amount of money a Merchant NPC will move into one of your houses. In addition to adding new NPC's to your village, you also have to defend it from monsters. Monsters spawn during day or night, but the enemies at night are stronger and more dangerous. Every once in awhile you'll also have a "blood moon" where waves of Zombies will invade your village and can even break through doors to get to you and your villagers. I've also read that after certain conditions are met you can have a Goblin army invade, but I've never had that happen yet.

There's also a fair amount of character progression. As you explore you'll find better armor and weapons as well as items that increase your health and magic reserves. You'll also find specialty items like a grappling hook which is basically the hook-shot from Zelda. Your character also persists between worlds unlike in Minecraft, so if you start a new world anything in your inventory carries over with you as well as your health/magic levels. You can also find a piggy-bank that can be used as a multi-world storage to transfer other items between your worlds which is a nice touch.

The crafting is very simple too. Whenever you open your inventory there is a list of all the items you can currently create with the items you have and if there's any crafting items near by (such as a work bench or furnace). Just click on the item you want to make and you're done!

There's also some pretty crazy boss battles. So far I've only fought one boss character and that was after I summoned him by accident. The boss, which was a giant flying eyeball, pretty thoroughly kicked my butt several times before i finally took him down.

The weakest parts of the game for me are the creative and exploration aspects. Because the game is 2D even the biggest most grand castles or houses feel, well, flat and kind of boring. Exploration is, well, I dunno why I didn't really like the exploration that much. There is a lot of stuff to find in the game and there's treasure everywhere. Navigating underground is kind of a pain until you find the hook-shot because it's pretty easy to get stuck in a hole or cavern that you have to dig/build your way out of. Also, enemies constantly respawn so you have to keep clearing them out while trying to look around and after awhile it can feel a little bit like a chore.

Overall the game is great though, and the graphics and gameplay give it a fun retro feel. I've never played it with anyone else, but like Minecraft you can set up a multiplayer server and play with friends. And last but not least, the game is also pretty cheap on Steam and I see it go on sale pretty often (I paid $10, I've seen it as low as $5 though). I'd definitely recommend this to anyone who liked Minecraft but didn't like the combat, or for anyone looking for a good retro action/RPG experience.

Ill pick this up on a Steam sale as it seems so awesome.

Have you played with people? Is it cool?

I haven't played with people, but I can see how playing as a group would be fun. Especially during boss fights. It would also help while trying to mine resources. One guy could focus on keeping the mobs off the other while they mine. When I play on my own I'm constantly having to stop and kill mobs.

Whoa! I'm so glad to see the first post about Terraria, after I posted so much about my game play of it! Hahahaha. I, also, have not played the game with others. I guess I'm pretty much a solo gamer (which didn't quite work out for me with FFXI, but....). Terraria is really a great game and I totally recommend it! I think at first I had some hesitation as to the 2D aspect of it and the fact that I had already played some of Minecraft, but Terraria really is a great game! Thank you for being (from what I can tell) the first to mention it. I must also thank Travis who gave me a gift copy of it. =)

The next time we run a server you should play with us Greg, the game really shines with friends.

=) That would be awesome! I thought of that as I last fought the Wall of Flesh. I could imagine myself telling the other player to just "sit back and watch" as I slaughtered the WoF quite quickly. Hahahahahahahaha.