Im going to do something different this week for Retro 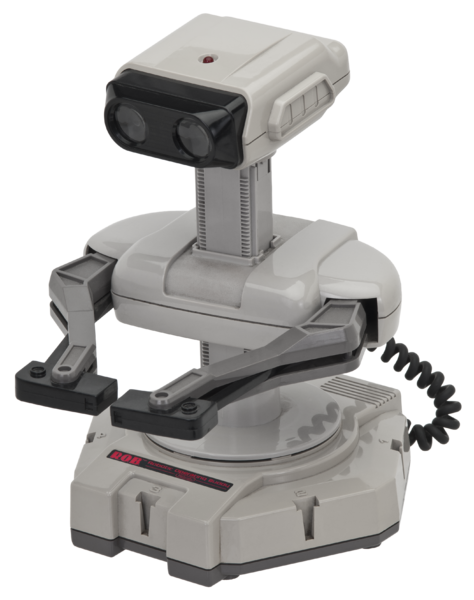 I'm going to do something different this week for Retro Tuesday. This week I want to hear everyones stories about your very first video game experience. I'll start off the discussion.

Although it's entirely possible I had played games earlier, my first real memory of playing video games was when I was around 4 years old and my parents bought us a NES, complete with Duck Hunt, Gyromite, and ROB the robot (pictured above). :)

Even by 1987 standards ROB was pretty lame, but to 4 year old me it was "OMG A ROBOT IN MY LIVING ROOM!!!" I was pretty hooked. I think there were only two games that worked with ROB, and as it was I only ever had Gyromite. When you were playing Gyromite you would need ROB to press buttons on the controller to open and close gates for you so you could advance around the stage and avoid enemies. You'd pause the screen (which made the screen turn blue) and then the next button you pushed ROB would mimic the action about 5 minutes later. :P But, still, OMG ROBOT!

Then my parents bought Legend of Zelda, and it was all over for me. :)

My first experience I remember... The one that sticks with me when I think about my first flip into video games is Super Mario Brothers. I went to an old ladies house that went to our church and she said she had something that her Grandkids played when they were in town on an old black and white TV called a Nintendo. She only had Super Mario Brothers and I flipped it on.

Mind blown/epic joypuke/addicted to the idea of owning one for the next few years. It was MANY years later we actually bought one but I can remember the magic of going into World 1-2 for the first time, the place getting dark and being blow out of my socks.

I have kinds of those moments now, but like they say, you can never go back.

I'm not sure I can quite recall my first gaming experience as it was so long ago (and I've aged a bit). But, I remember very early memories when the NES had come out and when I'd visit my cousin here in Virginia and we'd play on it. We also got Gameboys for Christmas....ah, the early days of Nintendo, they were so awesome. I'm so glad I lived with them!