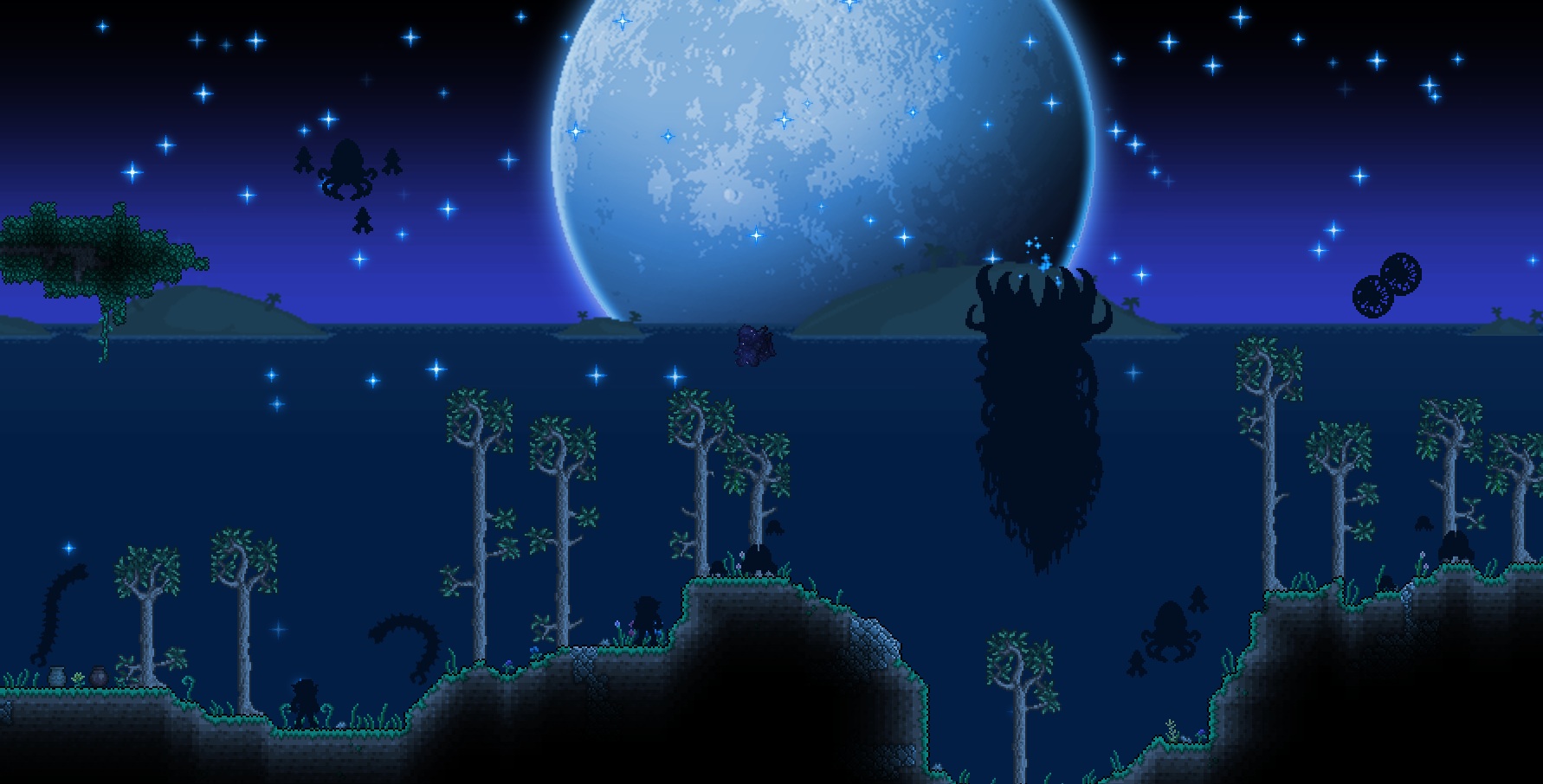 Andrew Spinks did an interview with PC Gamer recently and details what's to come for our favorite terrarium simulator. Even though he won't be directly involved from this point forward, as he's moving onto a new project and eventually Terraria 2, the future looks exciting.

First up, he shared that updates would come more frequently, and in smaller chunks, possibly including new mechanics and alternate biomes. This could be good or bad, depending on your preference, but it will keep the community more active for sure and add tons of replay value (as if there isn't already infinite replay value).

In addition, he said that in the future they'd like to add mod support and creative mode, but didn't confirm them as definite future additions to the game. Mod support would ensure the game could go on past what the developers want to put into the game.

When you consider that development ceased at one point, but then kicked back up with 1.2 and everything we've gotten since, it's really amazing to think that there could be this much coming in the future.

Awesome interview! Wow, more for Terraria?! That's truly exciting! I recently thought of something I'd like to see in the game, but cannot currently remember what that was.

My son keeps asking if "creative mode" was coming to Terraria, especially in 1.3. I told him there isn't a "creative mode," the game is in "creative mode." Perhaps there is more to it, as in being able to build without any mobs. That makes sense.

As for mods, that brings me to something I was thinking about recently. I don't think I'll include those thoughts here, though. Again, my son mentioned mods for Terraria, which I haven't tried and I really don't have any desire to do so at this point. However, that's only true if you do not count TShock as a mod, although perhaps it is. Still, it could be interesting to see what modders come up with, perhaps it could lead to further things being included in the game.

Yeah that's what creative mode in Minecraft is, isn't it? Just building without enemies, etc?

TShock is a mod, but a different one from usual. It's a mod of the server instead of the client. If mod support opens for both server and client, TShock's development would be much smoother, and could be way more modular.

One thing I'd love to see came up in a discussion on the Terraria subreddit. Once you've done everything, beaten the moon lord, vanquished all the foes, the Dryad then gives you quests to clean up the world. She already tells you the corruption percent as it is, so she could give you markers to patches you may not know about. Once you completely clean the corruption/crimson (and maybe hallow) out of your world, a new NPC moves in: The Mayor.

The Mayor gives you certain quests like getting resources, etc, and as you complete more of his quests, new NPCs move in that may be just normal people, may sell things (choosing from the pool of the other NPCs), some may be builders. You can set certain areas to be construction zones and your town will grow and more people will move in.

Since anything you could possibly do after getting all the Moon Lord drops would be creative/completionist, why not give something to go along with that? At this point there's no real endgame, and this would add onto it.

I doubt it's within the scope of Terraria. As Andrew said, the engine is reaching its limit. But it would be nice for Terraria 2.

Oh that would be sweet!

Still, if it's reaching it's limit, I wonder how much more can be added or done. It seems like enough (as he said) to provide some updates ever 1-3 months, but for how long? Also, could the engine be upgraded? Maybe that's Terraria 2. I'm still wondering about Otherworld and how that will be, but I'm sure I'll jump on it when it's ready.

I'm glad he created the game and that he decided to "finish" it. I've been loving the updates I've seen and I look forward to more. I like that he's still working on things and planning on continuing with the game as a series.