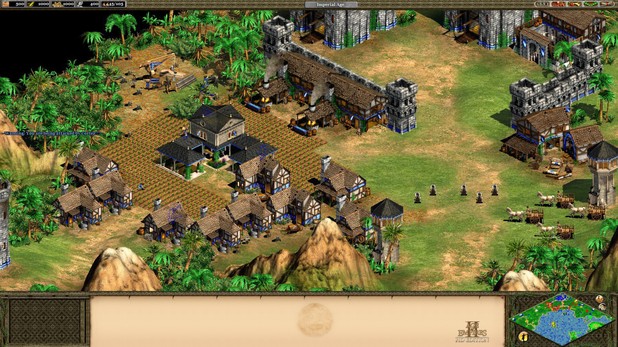 After playing my first Age of Empires 2: HD multiplayer game I am happy to say that it went very well. All the awesome fun of the original game is here and in full force. Travis and I played a 2 vs 2 match with bots to try out the Age 2: HD multiplayer landscape.

Since its been a few years since I played last, it took me a bit to get back up to speed. As we were playing I was letting Travis know all the special UI hints I knew to make the game play much smoother. For instance, you can shift click to queue up house construction instead of just doing one at a time. And that you need to remember to queue your farm reseeding. Age 2 has a ton of advanced UI and knowing it makes the game a much smoother prospect.

We had the game lag out some when we had lots of units in play at the end. This is a pretty common old Age 2 bug in the matches I have played with my friends over LAN and doesn't have to do with your multiplayer connection speed. The lag was tolerable but annoying. In some Age 2 matches I have played we have restarted because its so intense. I think it might have to do with creating a ton of trade carts, but I am not entirely sure.

The force I rolled over the bots with was pretty simple. Swordsmen, Arches, Trebuchets and Monks. I always need a Monk. :D

It was awesome playing Age 2 multiplayer again and can't wait to get more people in the mix.

A few more of my thoughts on Age of Empires 2: HD