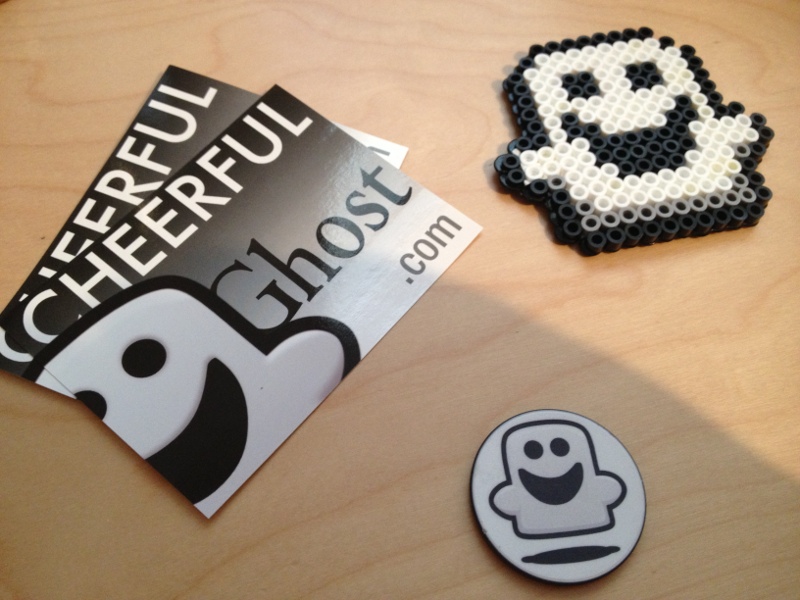 After launching Cheerful Ghost over a year ago I have been very happy with how the site has taken shape, most notably with how awesome it is to play and talk about video games with everyone. The site focuses on the games we love so we can talk about and schedule events with our friends.

One thing I wanted to do soon after I launched site Memberships is design and print some cool Cheerful Ghost swag to hand out to Members as a thank you for supporting the site. It may have happened much later than I anticipated but I am happy to finally announce..

The Cheerful Ghost Pack is a collection of all new Cheerful Ghost swag that will be shipped for free to all the current site Members for their awesome support. Since I want to keep the pack exclusive to Members it won’t be for sale on the site.

I know some of you might feel left out and may also be on the fence about getting a site Membership. To help you out, we will be shipping Cheerful Ghost packs for the next 10 new site Members. So if you have been thinking about a site Membership and want the pack, become a Member and you will be able to join in the new hotness too.

Members get a lot of other awesome benefits too so check into that too:

I want to keep making the benefits to site Membership better over time and the Cheerful Ghost Pack is a continuation of that goal. Adding new features exclusive to current Members and shipping exclusive swag are some ways to do that but I have more ideas I am excited to unveil over time.

Thank you for making Cheerful Ghost the awesome game community that it is and I hope you keep remaining an important part of it.

a bit of the “fine print”

If you sign up for a monthly Membership i'll ship you the pack after your 3rd membership month. I am just trying to avoid someone nabbing the monthly membership, getting the pack and then cancelling right away. Get a yearly and ill ship it out as soon as they go out!

This is my first foray into making fridge magnets and as such some of the Ghosts have discolored white pixel beads. Its not a huge deal, but some of them are a bit yellow. That said, you can be assured this will separate your Ghost from later runs as I will try and not recreate this unique attribute.

If shipping to your country or house is an issue, i'll contact you so we can sort that out. My goal is for everyone to get the pack shipped to them hassle free.

I'll be emailing Members collecting their shipping addresses and start sending out packs over the next couple of weeks. If there are any unforeseen delays i'll let each of you know individually. Its my goal to get you the awesome as soon as possible!

That's some sweet swag! I'm excited to pimp my fridge with DAT MAGNET.