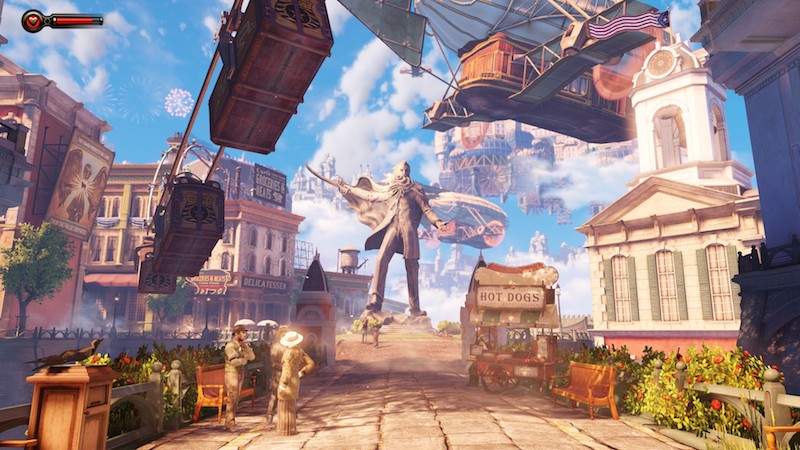 I picked up BioShock Infinite in the recently Steam Sale for $9.99 looking for a game to play over the holidays. Since the Steam version has a Mac port I installed it on my laptop and decided to cut into it the other night. First off the game is beautiful. Really, this game is one of the prettiest games I have seen in quite a long time. The amount of visual candy present in this game is astounding and the fact that it holds up is a testament to the games league of programmers.

I don't want to write about the games story because some of you haven't played it, I don't want to spoil anything for you. That said, I want to talk some about the games themes. The game deals with racism and classism in a way few games do and I think this is worth noting because the game isn't ham fisted when it does it. I found the games version of altered America and Columbia to be quite sad and can't help but consider how the United States turned out. I think the game asks some questions about societies in general in terms of treatment of certain classes I found very interesting. Columbia is a beautiful and bright shining beacon of American exceptionalism with an ugly core of hatred and racism.

So far the game seems to be more heavily geared to the art, story and overall tone than the shooter part of the game. Personally I totally dig the games pacing and find that I am having a great time simply walking through the game and experiencing the world of Columbia. That said, the action is starting to ramp up and have found it all to be quite fun and enjoyable.

Like I said earlier, I think I am a little under halfway and have really enjoyed myself so far. I hope BioShock Infinite comes to SteamOS because i'd love to play this on my Steam Machine. I know I am __VERY__ late to the BioShock Infinite bandwagon, but am happy with the game and if you haven't picked it up, I recommend you do.