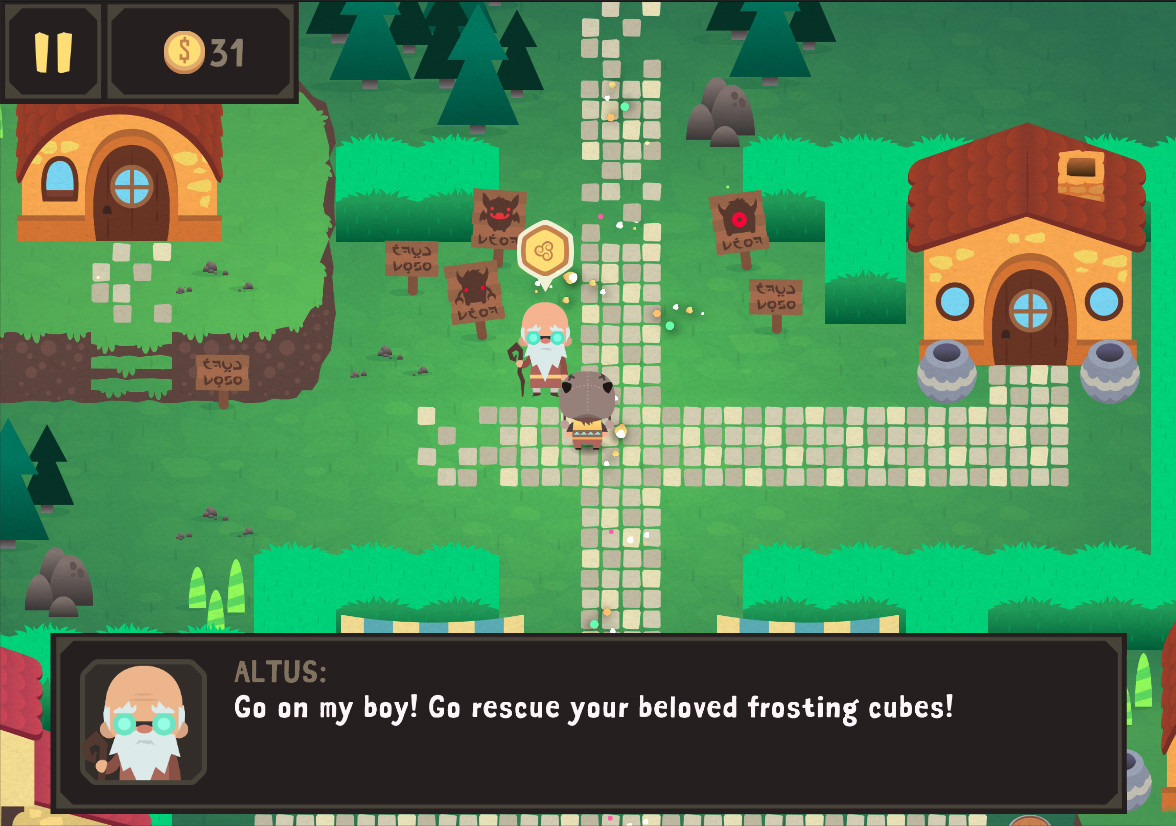 Monsters Ate My Birthday Cake is the game that got me hooked on Kickstarter. From seeing the first few minutes of the video to looking at the lush game art, I was impressed. After seeing the game first hand at Portland Retro Gaming Expo, I can say that I can't wait to get my hands on the final product. I've been curious about the progress of the game for quite some time so I decided to ship over a few questions to Sleep Ninja Games. Justin Baldwin got back and as a special treat gave us two exclusive screen shots of the game in development. The first shot above is of the Village with the in game character Altus. The other screen grab is of The Apricot Acres and you can click to view that one below. I think you guys will all agree that the art for this game is pretty incredible and that those frosting cubes need saving!

jdodson: Recently you showed off the monster Pizzy. One of her abilities is “Rainbarf” and I am curious if it works just like it looks, which is a concentrated laser beam of Rainbow colored puke? Which if it works like that, will be totally awesome.

Justin Baldwin: Yup. That's pretty much it. To quote her bio in the game "She can yack a wicked rainbow beam that activates ancient Energy Gems and detonates Boogins into a shower of psychedelic sparkle dust!" She is very effective in taking out enemies but you also still have to use her wisely. Your other characters can't really go through a blazing beam of rainbow barf either. So if you need her to activate Energy Gems in the game, you also need to consider the positioning and abilities of your other characters in order to solve puzzles correctly.

jdodson: When are you expecting Kickstarter backers will be able to start playing the game? With that, do you guys also have a release date for 1.0?

Justin Baldwin: We are planning on releasing a desktop backer build with the first zone of the game in March so our backers can get their hands on it. It also will give us a good opportunity to get some feedback from our supporters. The full game release right now is planned for Summer, we have a specific date set, we just aren't able to say yet due to distribution discussions that aren't fully settled yet. We will be able to announce the date soon.

jdodson: What are you working on right now?

Justin Baldwin: Currently we are finished with most of the core game mechanics and systems the game needs to use. We currently are mostly focused on getting the backer build ready. We are currently doing a lot of level design, bug squishing, adding polish, and adding a few more things that we think might be interesting. Rich Vreeland AKA Disasterpeace (Fez, The Floor Is Jelly) and Jordan Fehr (Super Meat Boy, Hotline Miami) are also doing some awesome work with the music and audio for the game as well. We still have a decent chunk of work ahead of us though for full release, but we finally starting to see a flicker of light at the end of the tunnel.

jdodson: I was just thinking this morning about a possible sequel to the game called “Monsters Borrowed My Liar, Liar VHS Tape.” This really isn’t a question. In retrospect the game might also be very short.

jdodson: Monsters Ate My Birthday Cake ships and people love it. After you bask in the limelight for a bit what are you guys planning on next?

Justin Baldwin: We definitely hope people enjoy it. We've put a lot of our blood, sweat, and tears into it. We likely will take a much needed breather like you said, getting some decent sleep for once and spending time with the loved ones we've been having to neglect over this process. But after that, we have two other game ideas in the burner. Both are quite a larger departure from what Monsters is, Monsters is more of a ode to childhood, something I honestly miss sometimes. One is a larger Gibson-esque Sci Fi RPG we've been wanting to do for a while, but it's a larger project. The other, and the game we likely will do next, is smaller in scale but focuses on just pure fun.

It's a little to early on for me to share much on specifics but it has a large focus on retro 4-player games where you sat in the same room as your friends at sleepovers and played all night. Games like Super-Bomber Man, Mutant League Hockey / Football, NBA Jam, Wayne Gretzky 64. I feel like there isn't enough out there these days besides VS mode in Spelunky and Towerfall that do this in way that feels this way. It's hard for me not to get excited and just blurt every detail but I don't want to share too much too early. I can say it will be ridiculous, over the top, and layer on a lot of that "We are so edgy it's the 90s" Sega and Super Nintendo cheese I dearly miss from the early 90s.

jdodson: Thanks for taking the time to get back to me, anything last thing you want to say as we wrap things up?

Justin Baldwin: Thanks man, really we are just excited to get Monsters out there and get the project wrapped up finally. We hope everyone keeps an eye out for it, and gives the game a play after release.

If you are interested in reading our first interview with Justin during the games initial Kickstarter: