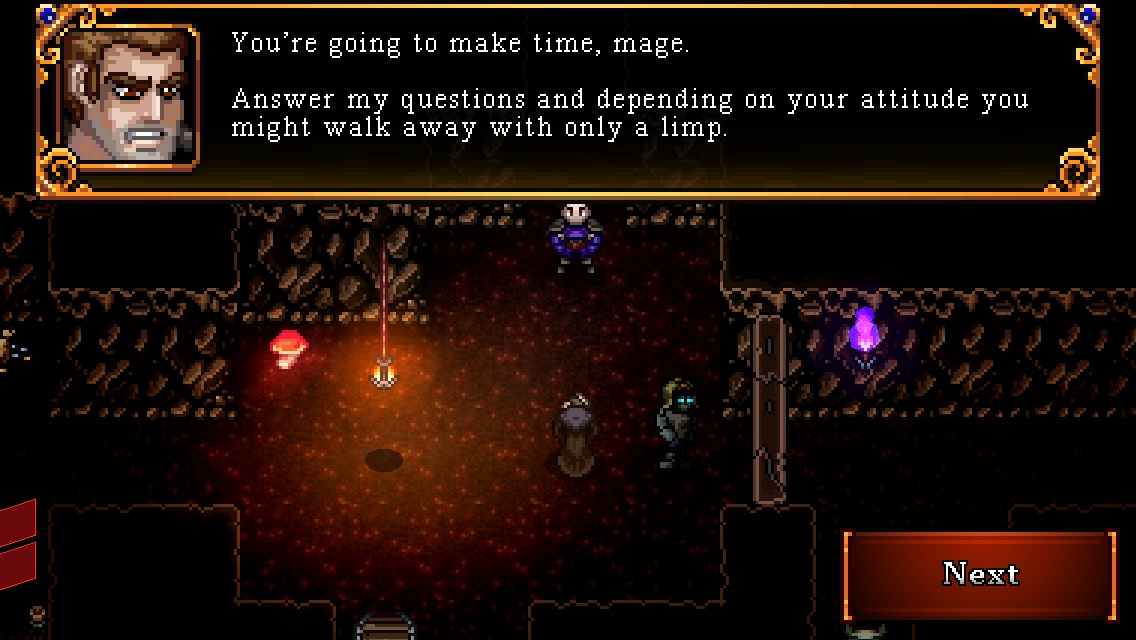 Can't seem to go far these days without hearing about a new Indie Rogue-like and this post is no exception. RocketCat Games, the company that brought us such greats as Mage Gauntlet, Punch Quest & Hook Champ just released Wayward Souls for iOS. It launched a few days ago and has made some pretty big waves in the Indie scene and since I am always in the market for fun mobile games, I decided to give it a shot. To date, my list of fun mobile games is very small but some games really shine and Wayward Souls is one of the best yet.

In Wayward Souls you start out by picking one of five classes, the Warrior, Mage and Rogue. Not all of the classes are unlocked from the start. You can unlock the Adventurer, Spellsword & Cultist classes by completing in game zones. Part of the fun of Wayward Souls is learning your enemies so you can avoid death. Each enemy has a very different mechanism for attacking you and it's fun to find a new one and learn the particular pattern to take it down. Wayward Souls also features totally random dungeons so no play through is the same.

One annoying aspect of perma-death rogue-likes is that you start fresh from game to game. Wayward Souls does something different in that you earn in game gold you can use to permanently enhance the classes you play. You might have a spectacular failure during one session but if you collected enough gold you can upgrade the class to do better the second time. Whereas most games make these upgrades useless, in Wayward Souls the class upgrades really effect your next game.

One gripe I have with hack and slash phone games is that the controls usual suck. Wayward Souls breaks out of the this tradition with a really great use of phone gestures to make the gameplay smooth. I'd rather play this with a traditional controller for certain, but after some time with the game found the touch controls to be perfectly acceptable substitutes.

The overall art in the game looks like a love letter to Secret of Mana and as such totally love it. The music is fantastic and really brings it's unique style to make the game that much better. The game score is so imaginative I was finding myself in awe of what was happening musically. With that, I hope they release it as a download in some form as i'd love to add it to my personal collection.

Wayward Souls is a great game if you are looking for something pickup and play that offers a deep PC like experience. One huge complaint I have with most phone games is that they are trite and devoid of fun and Wayward Souls really breaks out of that and offers up a real "meat and potatoes" experience.

Wayward Souls is available right now on iOS for $5 and will be ported later to Android and PC. RocketCat plans on increasing the price over time as they add more content to the game so if you are interested, best to pick it up now.

**EDIT**: Looks like we can all nab the Wayward Souls OST from Bandcamp for only $3.

Awesome. Let me know what you think.