Check Out The Cards I Opened In My Last 4 Hearthstone Packs! 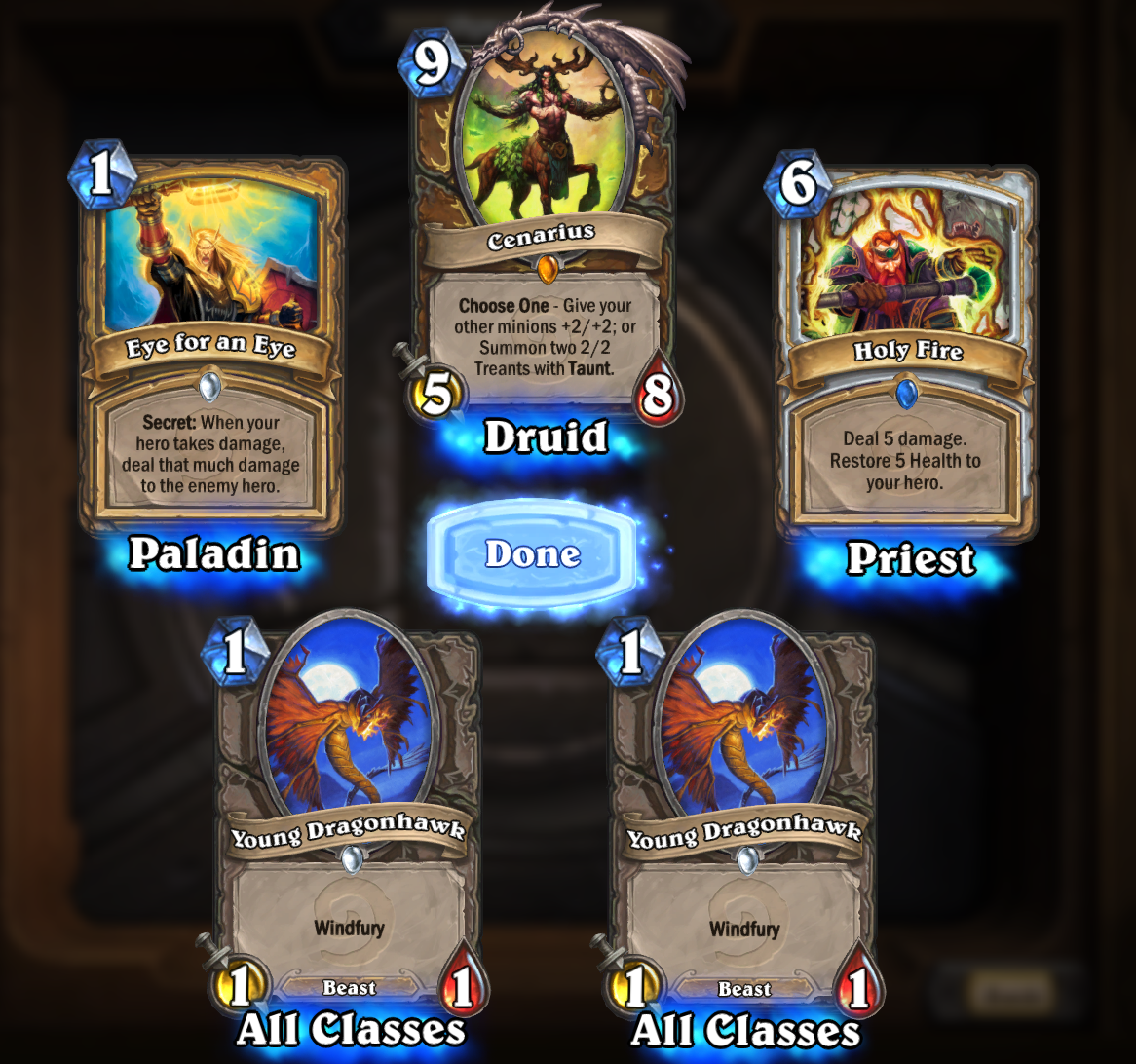 In a bid to push Cheerful Ghost to new heights of video game reporting... or that I simply had an idea that I wanted to try... I give you my four recent Hearthstone Pack opens! As with most things I'll provide a card by card commentary and encourage you all to join the conversation. I'd love to hear what you've been collecting and how that's effected your decks and gameplay.

For quite some time now for each Hearthstone pack i've opened I take a screenshot of it and date it and put it in a folder. I'm a collector of my own gaming history over time(large part why I built Cheerful Ghost) and love to go back and see what i've opened. It helps me understand my overall game progression and remember a time when I didn't have two Defender of Argus's or my first Big Game Hunter pull back in November of 2015.

Each one of these packs is classic as i've been saving all my gold(currently 4200) for opening The Old Gods packs.

This pack open really changed a bad string of luck opening packs I mostly dusted. You can always get a bit of dust from a pack but I'd much more open this sort of thing. I got my first Mage Ice Block spell which is a staple of freeze Mage, my first Demolisher a card and my second Ancient of War.

I dusted the rest as they were dupes.

Besides the double Dragonhawk dupes this pack open is my most legendary open in months! Cenarius isn't a top flight Legendary but he is a really situationally useful card that mirrors the choice cards that define Druid. Do you need two 2/2 Taunt minions or simply beef your existing minions? The choice is great but the casting cost makes this card less desirable. I am not a Druid pro and learning how to use this card effectively has been fun.

Nice to open my first Priest Holy Fire. 5 health and 5 damage so what's not to love here? Maybe the 6 casting cost but then again I see this card get a lot of use in good Priest decks.

I opened this right after my Cenarius pull so how could this be anything other than anticlimactic? Getting my first Aldor Peacekeeper was really fortunate and it was nice to get my second Amani Berseker.

The rest were dusted as dupes.

I run a very fun "Nicest Warrior" deck that focuses on weapon synergies and getting my second Dread Corsair makes that deck even better. Since Dread Corsair is a 3/3 with Taunt that costs 4 and 1 less cost per weapon power if you have a 5/2 or 4/2 weapon equipped you can cast this for free. I rounded out the open with my second Soul of the Forest and if I keep playing Druid I imagine i'll use both of them more over time.

I dusted the rest as they were dupes.

So those are my four recent Hearthstone pack opens. What have you opened recently?

Yeah, they are all pretty solid. Eye for an Eye is interesting but it doesn't get much play.

These are cards you got from saving your gold and then buying packs? I haven't played the game in a very long time. It's tempting to get that unlock from WoW, since I've never played that game. I'm not sure when or if I'll return to Hearthstone. I still believe it's a great game, but the PVP part of it doesn't appeal to me very well. Granted, I could get really into it, do some research, watch your videos, and perhaps I'd enjoy it more.

> These are cards you got from saving your gold and then buying packs?

Great question but no. Right now i'm hoarding gold for the upcoming The Old Gods expansion packs. You get a pack per week by getting a Tavern Brawl win and occasionally get a quest where you can open a pack if you watch a friend win. Right now all my new cards from those packs.

Oh sweet! I also think it's amazing how much gold you said you have.

Thanks. I started saving the second I heard a new expansion might be in the works. Since I would have only opened classic, TGT or GvG it seemed better than just opening stuff I maybe already had.