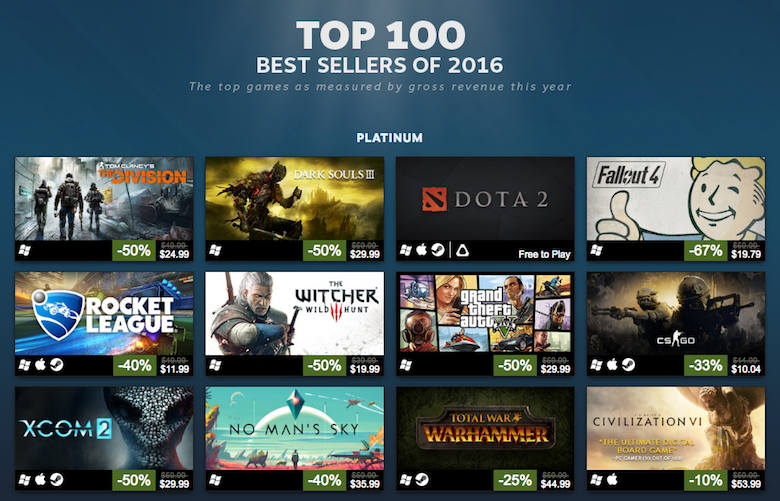 This year Valve released an official list of the top 100 best selling games on Steam. I've seen some people chide this list as No Man's Sky is one of the top Platinum sellers and many think that if you consider the returns, No Man's Sky shouldn't be a Platinum Seller. Well, that would be the case if gross revenue didn't automatically adjust for returns, which it does. So... yeah, the list is accurate and I really found it fascinating to read through.

Stardew Valley and Doom rounded out the Gold top sellers and the ever continued greats such as Terraria and Age of Empires II HD charted on the bronze list.

I have at least one in each of the categories. DoTA2 is only there because when I turned on my beastly PC for the first time and launched Steam, it appeared in my library. I don't know why Steam says TF2 is in my library, because I haven't played it (nor do I intend to, though Vinny plays it).

Anyway, I have no idea what to expect for the top 100 selling games of 2017, with only one or two exceptions. The only new game I can think of that will hopefully make it to this list is Terraria: Otherworld. I hope and expect that it will be released this year and I'm looking forward to it. The devs have gone silent on it for a while now, but if you look at the announcement and follow ups to Terraria 1.3, then this could be a really good sign.

I'd also like to add that Ark: Survival Evolved is expected to graduate from Early Access this year (in the Spring). Since I've been following its development since the beginning, I have a lot of faith that this is actually coming to fruition. They're getting close to the end of content they've stated they're going to add. Almost all of the slated creatures have been added and they're even beginning to add more than usual each month. The January update, for example, is adding 7 creatures! Before it was about 2-4 every month (once the frequency of updates slowed). The last update added 5. So, I imagine Ark may be on this list for next year as well.