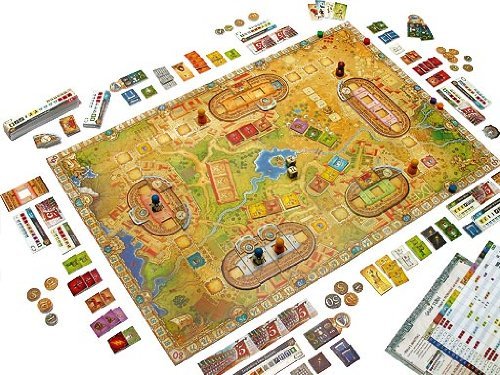 In a bid to increase my knowledge of the fine board game arts I went to Rainy Day Games and rolled the dice with some awesome people. Every other Sunday at 1pm Rainy Day Games hosts a board game event where anyone can go and you pick a game to play. I showed up a bit late because Siri pointed me to the wrong location. When I arrived there were two groups of people and I joined the group playing Days of Wonders game "Colosseum" because they had a free spot. Yay!

In Colosseum you play a total of 5 rounds and the player that puts on the best show in those five rounds wins the game. Each round nets you cash you can spend on Colosseum upgrades, better shows and other various other stratagem to help you earn points to get the best show.

Each round has 5 phases which are:

Phase 1: Invest in your Colosseum in various ways. Expand it, add various features to it to give you extra rolls or points when you add your show score.
Phase 2: Bid on tokens with other players. You need tokens to put on shows.
Phase 3: Trade tokens with others. Similar to other trade phases in games like Settlers of Catan.
Phase 4: Put on your event. The more tokens you have the more points you get for your event.
Phase 5: Closing the round by giving up a token in your show and the player trailing the pack can steal a token from the person in the lead.

The game seemed a bit overwhelming at first but after a few rounds it clicked. I made a fatal flaw in the 3rd round by not expanding my Colosseum to support an advanced show. That mis-step caused me to end up in last place as everyone else made the stab for the 3 layer Colosseum and got an advanced show. Didn't matter too much that I came in dead last as it was a ton of fun though.

The game is made by Days of Wonder, the people that make Ticket to Ride. It has the score counting on the outside board edge similar to Ticket to Ride but isn't too similar beyond that. I really liked playing Colosseum and recommend it if you like strategy games involving trading. Our game lasted about 2.5 hours but some of that was spent explaining the rules.

It was awesome to learn Colosseum and meet people that come to play. I plan on hitting up more of these in the future and if you were on the fence about attending, I would recommend you go to one. The people are awesome and its cool to play new stuff.

The update is here and I feel like I need to watch a...

Yeah, I then imagined having blue skin IRL. 🎶"Da ba...

I didn’t know you could blue yourself that much...