Our Interview with Steve Ellis of Rainy Day Games 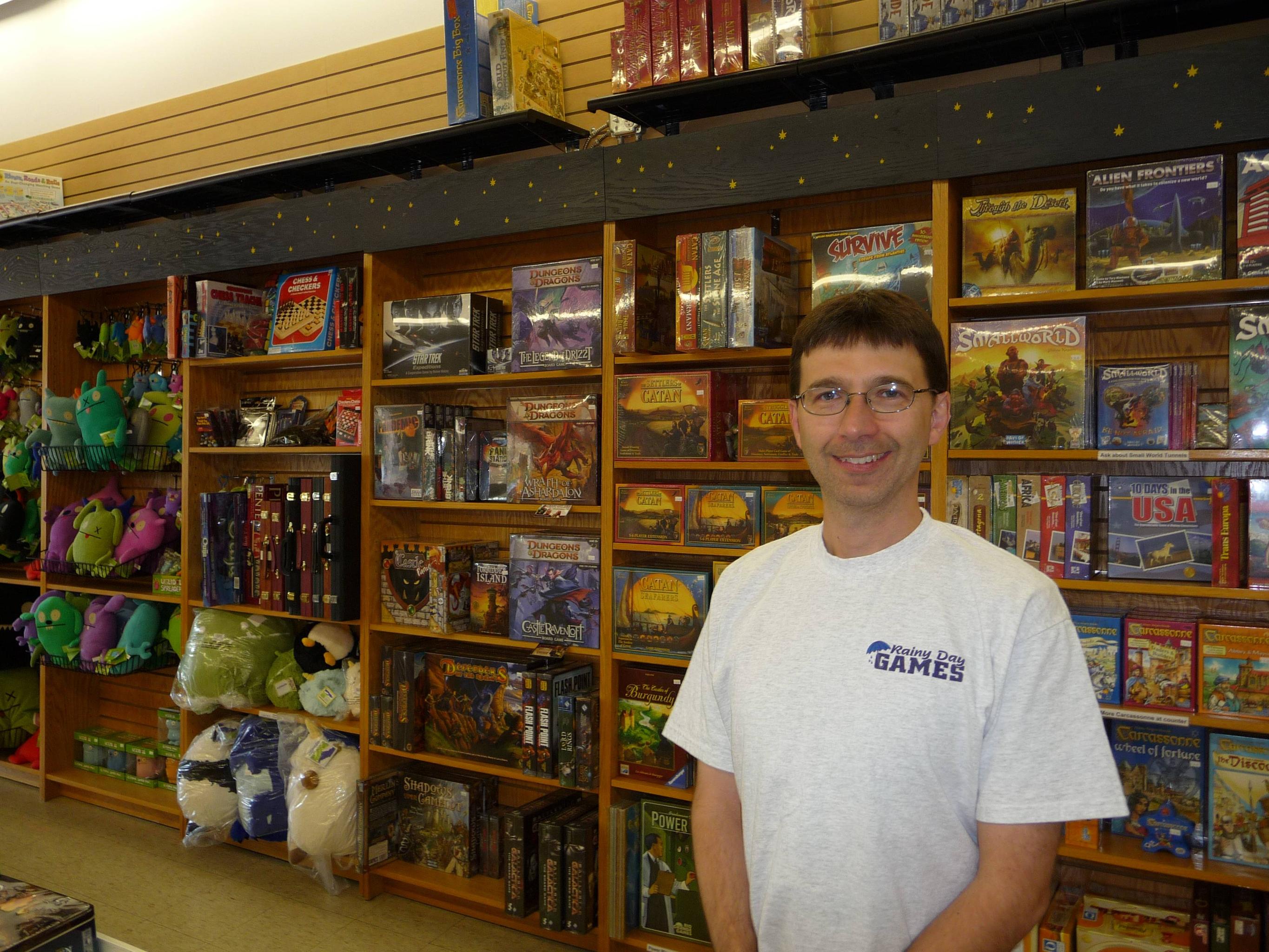 After the first few minutes of meeting Steve Ellis it’s apparent we share an unadulterated love for gaming. Steve Ellis runs Rainy Day Games, a local game store that sells many classic games, miniatures, RPGs, card games and puzzles. I was able to sit down with Steve so we could talk about gaming.

Rainy Day Games started 14 years ago after Steve and his business partner Jeff met playing Magic: The Gathering. Steve dropped the idea of starting a store together and the idea stuck. Both decided to forgo being paid at first and continued to work day jobs during the first few years. In looking back, Steve is happy they did this as it helped the store get on it’s feet. One thing that helped Rainy Day Games succeed when it opened in 1998 was the explosion of a new card game called Pokemon. Legions of kids bought, played and traded collectible cards helping fuel the first few years of the store.

What Steve is most proud of with Rainy Day Games is the community and the continued success of the store. They host regular events for Warhammer, Magic: The Gathering, Board Gaming, D&D, Pokemon and HeroClix. Rainy Day Games has events happening every day of the week.

If you haven’t made the plunge into more modern board games, Steve recommends you check out Ticket To Ride. Ticket to Ride is a train adventure where players claim railway routes connecting cities and competing for the highest score. Days of Wonder’s hit showcases the best of breed for what board gaming has to offer as the rules are well explained, simple and it's easy enough to teach your friends.

Steve notes that much has changed since the early 70s and 80s for board gaming. Citing higher re-playability, an increase in quality of game pieces and an unbelievable attention to detail, modern games have come a long way since simpler days of Risk and Monopoly. Steve cites the rise of influential Euro style games in the 80s and 90s as one reason modern board games are better. Since so many great games exist, if you read the game box and it looks good, the chances are high you will love the game. That said, Steve notes that because there are so many new games released many great games go unnoticed because the bar is set so high.

Often people are reluctant to purchase board games that range from $50 to $100 because of a perceived lack of value. Steve points to many games that adorn Target with a $15 price tag as examples of why people feel games have little value. As publishers hit quarterly revenues and keep profits high, most games in chain stores are made cheaply, simply and have little replayability. Steve compares buying a great board game with taking your family to the movies. Since the average family can spend so much on a movie, the value of a great game that can be played again and again makes sense.

As Steve talks more about the amazing feeling of opening a new board game, reading the rules, bagging up the pieces, and playing it for the first time with his friends, the love for what he does is apparent. Rainy Day Games is a local game store I now frequent for board game events and pre-order the latest awesomeness I am into. If you are in the market for getting a new game or want to try something new, say hi to Steve and give Rainy Day Games a try. You just might have some fun.