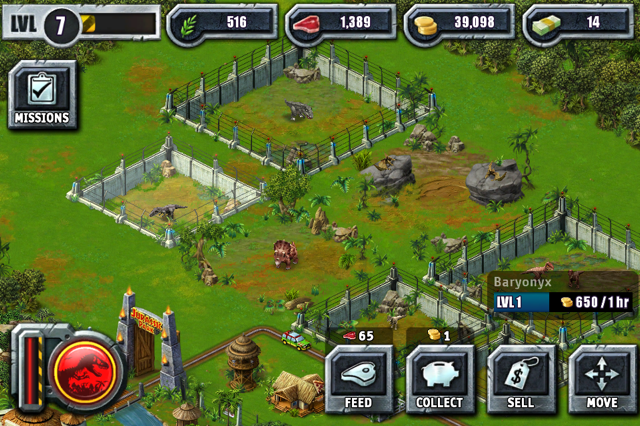 Been playing a brand new iPhone game called Jurrasic Park Builder. Its essentially a My Town 2 or Farmville type freemium game. It follows the same freemium tropes in that you have limited resources, things take time to build and you wait. Like many freemium games you can pay if things progress too slowly.

I picked up the game because I have a special place in my heart for Jurassic Park. In the end the game is fun, but like all other freemium games it won't hold my fancy for long. That said this game is a bit different as it is much faster paced. For instance, I can collect the money from my Dinosaur exhibits much faster and have more than other freemium games(see screenshot above for my accumulated game wealth). I guess I could spend it all on shrubs and decorations but I want more Dinosaur exhibits. To that end the game does limit you on getting one exhibit per level so if you want to unlock more you need to grind time or pay.

This game seems to pull a play right out of all the other "freemium waiting games" in that roads seem to be something they want you to think you need, but you don't. For instance, I have a road leading into my park(because I just haven't demolished it yet) but haven't built any others. Many of my exhibits don't have a road, yet the game doesn't penalize me for it. On the flipside, Simcity would p0wn me for such a mis-step.

They just added a new feature that you can use once a day where the "Dinosaurs go Wild!" and they can possibly escape(its the red Jurassic Park logo button in the bottom left). Essentially they just put a count down over the cages and you have to tap it before it fills up. The longer you wait on the timer the more money you get. Haven't seen what happens if I let on of my Dinosaurs escape. "Oh, yeah. Oooh, ahhh, that's how it always starts. Then later there's running and screaming."

That all said, the game is fun and its free. If you have an iPhone and want to build up a Dinosaur park, get it. Well that and it helps me check off a bucket list item of raising a pet Triceratops.