The Steam Sale at The End of the World 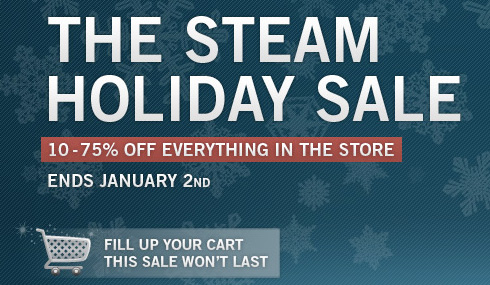 We all know there is a mega-ultra-deluxe Holiday Steam Sale going on now. I am sure a few of you already dropped some coins on it. I am sure some of your even checked out the Bethesda pack which is so epically sick at $90 if you buy it you might contract pneumonia. *ZING*

But we already know that, this is old news. But I needed to get that out of the way because tomorrow is supposed to be the end of the world. Since it's the end of the world and we are going to be dead tomorrow sometime, shouldn't someone buy every game in Steam? I mean, that's some kind of achievement right? I mean the world is ending so its not a big deal right?

I mean if someone, you know, bought a ton of games and just racked up a huge tab on his Visa EXPECTING the end of the world, that would be all right... right? I mean, I didn't do that, heh... yeah.

But it won't matter because, hey tomorrow, that whole everyone dying thing... right?

And in a completely unrelated note don't be surprised if you start seeing a donate button* on the CheerfulGhost site! >.>

(*Just to avoid any panic: This was a joke. There won't be a donate button unless Jon really did buy all the steam games.)