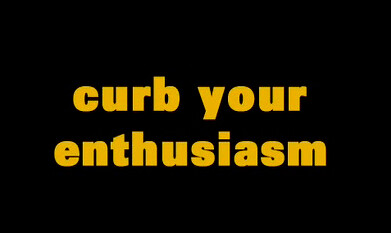 A few years ago (maybe 10), a friend introduced me to a show on HBO called Curb Your Enthusiasm. I thought it was funny, so I decided to watch more of it. Since I enjoyed it so much, I bought a couple of seasons on DVD. Recently, I was exploring the Amazon video app on my PS3 and found out I could catch up on the show for free, since I'm an Amazon Prime member. Now that I'm all caught up, I've decided to go back and watch the earlier seasons again and I'm loving it. I wanted to tell you about it, hence why I'm writing this post.

I'm not exactly sure how to describe it to you. You could technically call it a “situational comedy,” but calling it a SitCom is a bit misleading as it's not the kind you'll find on regular TV. The main character in the show is Larry David, co-creature of Seinfeld. It revolves around him and his (fictional) wife and their life together.

So, he is a Jewish man living in California with his lovely wife. He has a manager he sees frequently and various celebrity friends like Richard Lewis, Ted Danson (from Cheers), and cast from Seinfeld including Julia-Louis Dreyfus. These people apparently play “fictionalized” versions of themselves.

Larry tends to find him self knee-deep in life's little problems. Many of these he creates for himself by saying or doing something that's not quite socially acceptable. There are really plenty of examples to give, but I don't want to give away too many spoilers. The first episode opens up with him talking to his wife about the fabric “tent” produced by his pants when he sits down. This later turns into an awkward situation when his wife's friend accuses him of getting an erection.

The topics covered in the show are clearly for an adult audience, hence it being on HBO. There are adult situations and language, which provide some more flare. The wife of Larry's manager definitely has a mouth on her and drops some serious F-bombs, but not just for flavor, it's because she yells at Larry and his manager for doing or saying stupid things.

It's a very funny show, I think. There is no laugh track, which I think is great because the audience doesn't need to be told when to laugh. It is funny, but often, I find myself feeling sorry for Larry. He can be a bit of an ass and so are other characters. One interesting fact about the show is that it is often unscripted or loosely improvised.

I think the sad thing is that I can sometimes relate to Larry. Sometimes I find myself saying or doing something completely stupid that comes back to bite me. It's tough saying or doing things “off the cuff” as they say. These things happen to some of us, which creates social anxiety because then you have to be careful what you say or what you do. I personally find it a difficult thing to manage.

Anyway, I do seriously recommend this show. If you're interested in what I've described, check it out or feel free to ask me for more information. I'll be glad to provide more examples. I think it's very interesting and humorous.

This is one of those shows that I've always meant to watch, but just haven't gotten around to. It does look really funny, and I appreciate that it doesn't have a laugh track. I generally won't watch shows anymore that have one.

Katie and I started watching this last night. I love Seinfeld and the humor is very similar. But this show deals with more R-rated situations and I love that everything in the show is improvised.

I'm glad you're enjoying it.

Yeah that line was in an episode we watched last night, and I finally realized where it came from! I have heard it so many times and never knew its origin.

You'll hear it again and again.

Well I thought so and I just verified. You'll recognize someone in the show from GTAV J. B. Smoove plays Leon Black. I think he doesn't appear until the last season or two, but he was one of my favorite people in the show. He's Dr. Ray in GTAV, a radio personality.
Check this out LOL https://www.youtube.com/watch?v=m7BgOYPNTlA

We finished today, we hadn't been super binging it, just watching one or two a day.

You're right, Leon is one of the best parts of the show. Very funny all around.

Awesome, I'm glad you two enjoyed a show that I recommended, even if you said you were thinking of watching it before. :)

Necromancing this thread because we're watching It's Always Sunny In Philadelphia and if you like Curb I think you'd like It's Always Sunny. It's the same kind of humor where people get themselves in awkward situations, BUT in IASIP the main characters are all terrible so you can just focus on laughing at them instead of feeling awkward with them.

Like many series, it gets much better in season 2.

Speaking of Curb, though, did you hear that there's a new season coming this year?

I'll add that to my long list of things to watch, thanks Travis! :)

No, I did not know about a new CYE season. Sweet!