My review of the Gamboy 2DS and Help me pick out games! 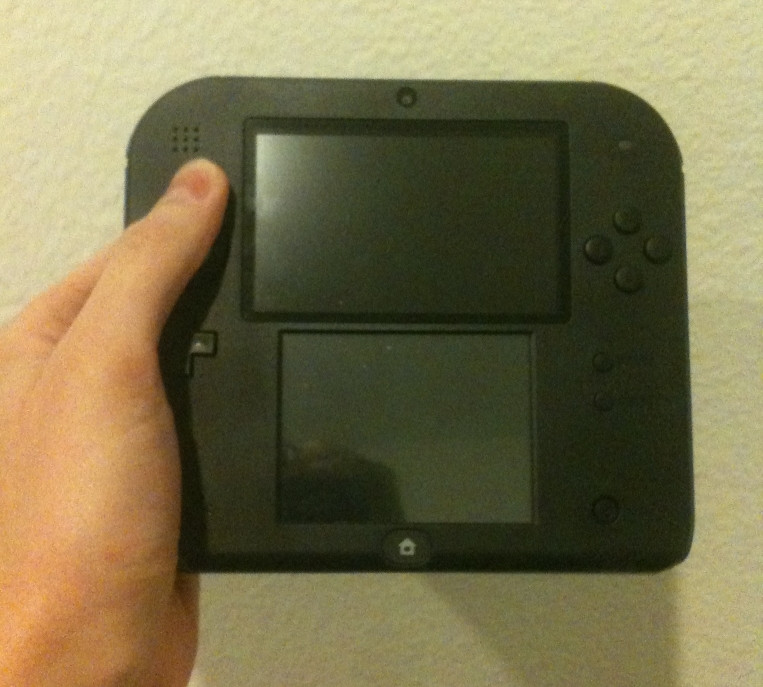 So one of the things I got for Christmas was this shiny new 2DS. I've spend about a dozen hours with the thing and wanted to share my thoughts on it. I also need to start getting some games for it and would like the input of my fellow CG users!

First up, my review.

When the 2DS was first announced many of us thought it looked big, ugly, and a little unwieldy (you can see the original discussion here: http://cheerfulghost.com/WhiteboySlim/posts/1567). I'm happy to report that, although it's still a little ugly, it is much easier to hold to and play than I had originally thought. Having used an iPad before I would say I have a much easier time with the 2DS than I do the iPad. It definitely has a certain heft to it, but it's not too bad. The longest stretch of time I've gotten with it was between 1 and a half to two hours and I didn't really get tired of holding it. I don't own a 3DS, so I can't show you a comparison between the two. Here are a couple photos showing the 2DS next to a DS though:

My only real complaint about the system is that it is just slightly too big to really be that portable. I can't fit it into my pocket, which makes my chances of bumping into the people via Street pass pretty low. The one time I did take it out with me I stuck it in my wife's purse. :P

The buttons feel good and the control stick is light-years ahead of the one my PSP has even thought they're roughly the same design. And I say this as someone who actually really loved the PSP. Where the PSP control stick felt stiff the 2DS is nice and smooth but still snaps back into the neutral position when you want it to. It is also slightly textured and your thumb sticks to it nicely.

It's hard to comment on the screen because I only have one 3DS game so far (Pokemon Y) and the graphics on it are pretty cartoony. But for what it's worth Pokemon looks really, really good.

Over all I really enjoy my 2DS. It's turned out to be a much better system than I was originally expecting and I'm looking forward to expanding my game library and spending more time with it.

Speaking of which... I need some suggestions on what games to get! As I mentioned before I currently have Pokemon Y and I've ordered Fire Emblem Awakening on Amazon but have yet to receive it. Leave your suggestions in the comments! (I'm mostly interested in 3DS games but feel free to suggest some stellar DS games too!)

The only other game i'd think to play on the 2DS(i'll admit I don't know about most of the games it has) would be the new Zelda Link Between Worlds.

Apparently it's a sort of sequel to Link to the Past, which is pretty interesting.

That said, I want to get a gaming handheld, but as I was explaining to Adym today as we were talking about this post, I don't want to buy another closed piece of hardware. On one hand I totally want to buy new games from Nintendo, like Pokemon X/Y and the new Zelda game. I also want to play my old NES games and don't want to pay Nintendo yet again for the same games on every new system. That said, maybe some day it will be trivial to hack or something? I hope so because i'd love a modern Nintendo system.

I always said it would never happen to me, but it has. I can't really see a point for a handheld console when my phone does mobile gaming.

Seriously, I may not get a hardcore experience, but I can waste time with my phone. I can enjoy Rayman running through the jungle or build some basic Terraria stuff wherever I am in the world. When I want to have a deeper experience I can hit up my PC or a console. I just can't justify a portable purchase until there are a significant number of games I want to play that I can't get anywhere else.

(But if someone wants to get one for me, I'd totally take it.)

Also, [pedantic mode]It hasn't been called Game Boy since the Advance era. It's just Nintendo DS, 3DS, 2DS, etc. these days. But really that's almost like Kleenex at this point. If it's a portable Nintendo console it's a Game Boy.[/pedantic mode]

I'd like to do some mobile gaming, I really don't like doing it on my phone. Valve did say they would get into the mobile space so.. Maybe a Steam Boy is in my future?

As far as hackable systems, I've heard you can hack the DS, although I've never tried it. I did hack my PSP and I had every intention of loading up some NES and SNES emulators on there but, sadly, my PSP is on it's death bed and dying a slow painful death.

I actually don't really use my GAMEBOY 2DS as a portable system much. I didn't with my PSP either. Because they are not tied to a TV and have a sleep function it is pretty much the best gaming option I have open to me as a parent of 3 small children. At least until they go to bed. :P

"I actually don't really use my GAMEBOY 2DS as a portable system much." Good point and really I just want to use mine not connected to the TV at home too :D

I haven't used portable systems outside my house in years either. It's just annoying that the screen is so small for home gaming. Like I want to play the new games but I'd prefer to have them on my TV. I might get a Vita TV instead of an actual Vita because of that.

I'm pretty happy with the size of the screen on the 2DS. Again, I don't know how it compares to the 3DS but the top screen is quite a bit larger than my DS. Plus with having two screens there's a lot of total screen space to make use of.

I'm glad to see your review of the 2DS, it entices me to write my own review of the 3DSXL (Zelda Edition) that I recently got. I thought the 2DS a bit odd because it doesn't fold like a normal DS. In your review, you said that fact makes it less portable. Now that I remember, I did put my son's 3DSXL into my pocket and it seemed to be a good fit. After a quick look at your image, it looks like the top screen is bigger than the DS, this seems to be a trait it must have gotten from the 3DS as it's top screen is bigger than the bottom. It looks like the bottom screens are the same size, however. Is that a regular DS or a DSXL?

I'm glad you like the new control stick. I remember when that came out as an add-on. I like it, too, actually. Although, while I played Luigi's Mansion Dark Moon, my thumb started to get sore. However, since I started playing Pokemon X today, I'm not noticing that issue. The control stick does feel smooth.

I also liked the PSP. I got all of the Final Fantasy games for it. I think the biggest issue with the PSP was loading time. I have not decided to upgrade to a Vita.

Back to the DS, I've had one since the original model came out (and it's around here still some where, I think, although I also think a hinge is broken). My son and I also have a DS (the 2nd model) and a DSLite each. I think something happened to my DSLite though as the sound seems to be a bit messed up.

I have not yet played The Legend of Zelda: A Link Between Worlds, but I do have Phantom Hourglass and Spirit Tracks. Although I have not yet bought Animal Crossing: A New Leaf, I recommend it or Wild World. I was introduced to Animal Crossing on the Gamecube and fell in love with it. I also have the one for the Wii.

Anyway, I'll keep checking out what you review and say about your 2DS and what games you get into. I've also collected almost all of the Final Fantasy handheld games. The only ones I think I'm missing (for handhelds) is Final Fantasy V and Final Fantasy XII: Revenant Wings. Oh, one more, Final Fantasy Fables: Chocobo Tales, which I enjoyed, but my son has lost our copy. =(