So last night @jdodson, my brother-in-law and I took the new 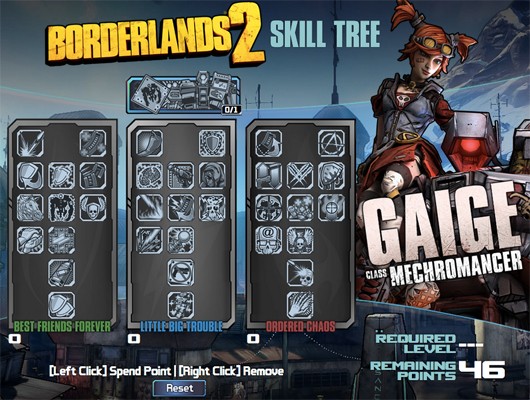 So last night @jdodson, my brother-in-law and I took the new Mecromancer class for a spin. And wow, is she awesome.

DeathTrap is quite possibly the most helpful special ability in the early levels. At level 9 I ran into a pair of Badasses (one Psycho, one Nomad with a shield) and DT tanked them both without any trouble! His damage so far is pretty impressive too.

As far as the Mechromancer's skills go, I haven't gotten very far into the Little Big Trouble skill tree to comment too much on it. For one, the skills I've gotten so far buff my chance to cause elemental effects, but I've only found a handful of fire weapons. That said, it did seem like the fire SMG I picked up was kicking a little more butt than a green-rarity gun should be doing.

Have any of you guys tried out the Mecromancer yet? Anyone picking up the Ordered Chaos skill tree? I'm very interested in how that plays out.

I had fun playing with you last night. We were both the Mecromancer and I think that may have been a little overpowered at a few points early on because Deathtrap can tank and we are pretty good as well.

I ended up winning the dual but ... we agreed to see what our Deathtraps would do and I broke the ceasefire first... SOMEONE HAD TO DO IT FOLKS! I REGRET NOTHING!