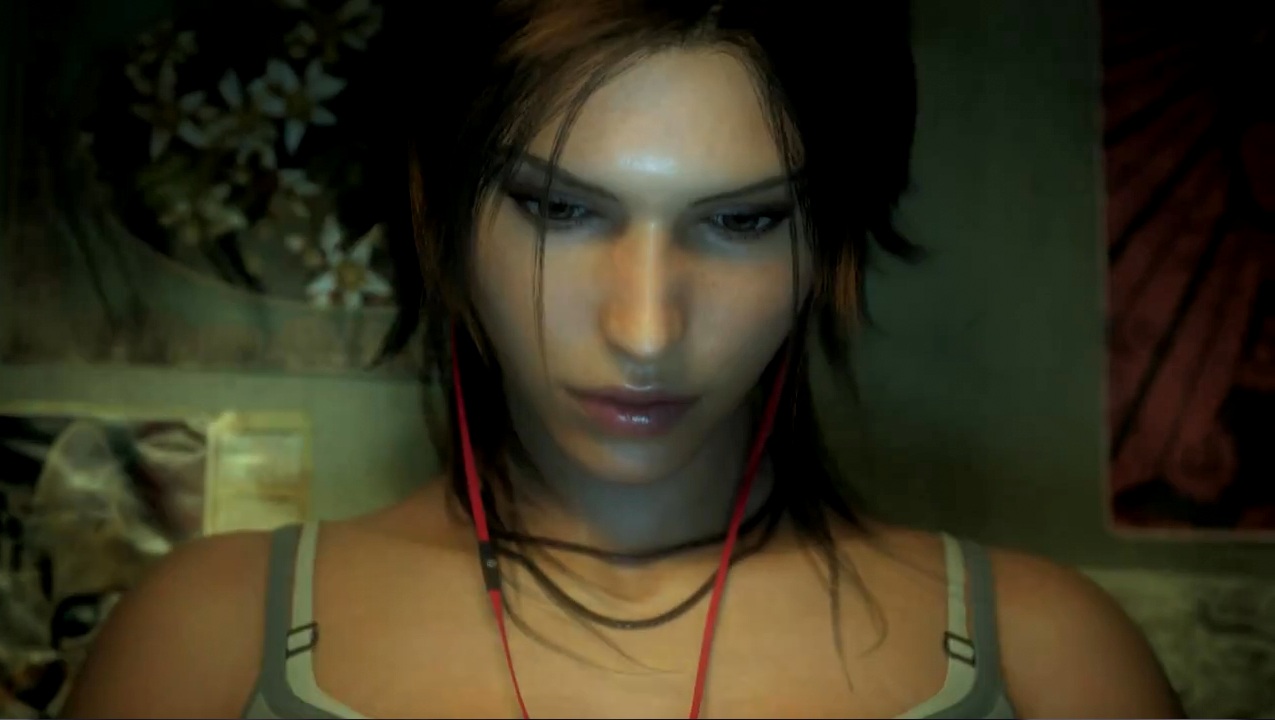 The first hour of Tomb Raider may be one of the best hours I've spent gaming. Seriously.

We're reintroduced to Lara Croft, a version of her prior to her previous exploits, and seemingly a different character. This Lara is a young archaeologist out to find ruins of a lost civilization. Immediately, chaos erupts, and Lara is thrown into danger with only the clothes on her back.

This Lara isn't the over-sexualized Lara we have been playing for years. Even though as each game went on they seemed to tone down the focus on T&A, it was still ever-present and in need of a reboot like this. Lara 2.0 is far more real. Yeah, she's quite attractive, but she's wearing reasonable clothing for an archaeologist-- a camisole shirt (I think, I'm terrible at what different shirts are called) and cargo pants. This is someone you might meet in real life, and her motivations are academic.

As soon as you get control, it plays like a survival horror game. You're injured, you have no weapons, and there are crazy people after you. And you're in for quite a ride.

The graphics are splendid. This is the first title in a while to really push my PC, and the payoff is great. I've read that this is optimized for AMD cards (and even has an option to render each hair individually if you're rocking AMD) but my GTX 550 ti handled it on normal settings, and pushed a few higher settings before the sputtering started. The lighting really controls the mood early on. You need a torch to get around, and you're functionally blind past a certain point. The shadows are fantastic, and add to the horror feel.

The real star is the voice acting. Every little action seems to be scripted. Hearing Lara gasp "Oh god!" when she's slipping or timidly say "OK, I can do this" when there's a big jump enhances the mood. When you find an abandoned camp to escape a storm, the fear, cold, and hunger are entirely believable thanks to the animations and voice acting.

Once you find a bow after a good night's sleep, the game changes. You can hunt for food, you can defend yourself. You see Lara's confidence growing little by little. The action and adventure quickly replace the horror, and the Indiana Jones feeling you're used to in these kinds of games is ever-present. And it's fun, the mechanics are all there, the puzzles are satisfying if a bit easy (though I'm still in the early game). It's still quite a good game.

But in that first hour, I experienced that rare anomaly of complete immersion, where the line where I ended and the game began was blurred to the point of non-existence, and it was *me* who was fighting for my life. I won't soon forget that, and I hope the rest of the game upholds the expectations the intro set.

I wonder, is this a prequel or kind of like a new Star Trek reboot without time travel?

It's more like the Star Trek reboot. It starts earlier than the previous games, but it's also a new story.