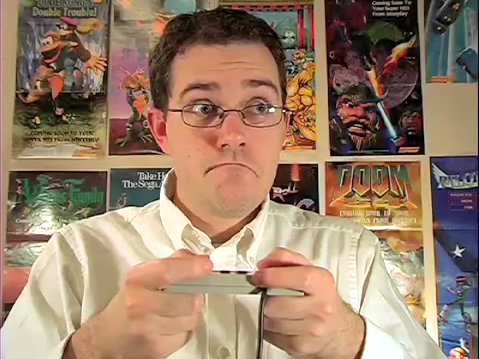 Yeah, that face. I had that face a lot.

But I'm not done and if not for a family gathering in a couple of hours I'd be playing it right now. And dying, and cursing, and laughing, and feeling that same kind of frustration and addiction that some of the best NES games gave us.

Yes, the game is hard. But it's not broken-hard it's "Nintendo hard" as it's come to be known. Imagine Super Meat Boy.

If you watch the AVGN's videos you'll recognize a lot of the gaming tropes that he hates. A game based on the AVGN would have to. But the core gameplay is solid, very solid.

The humor is funny at first, and kinda what you'd expect, but after 20 minutes it gets a little old. Every death screen (and you'll see a lot) has a randomly generated list of what the AVGN would rather do than keep playing.

Easy mode gives you infinite lives, and I'm not ashamed to admit I need them. Normal gives you 50, and I just got the achievement for dying 100 times. So yeah, plan on dying a lot.

Overall this is a definite recommendation. If it goes down in price over the course of the Steam sale, you should definitely pick it up if you're looking for a hard NES nostalgia-fest with great gameplay.