OpenEmu, or why I'll never need an emulator on PC again 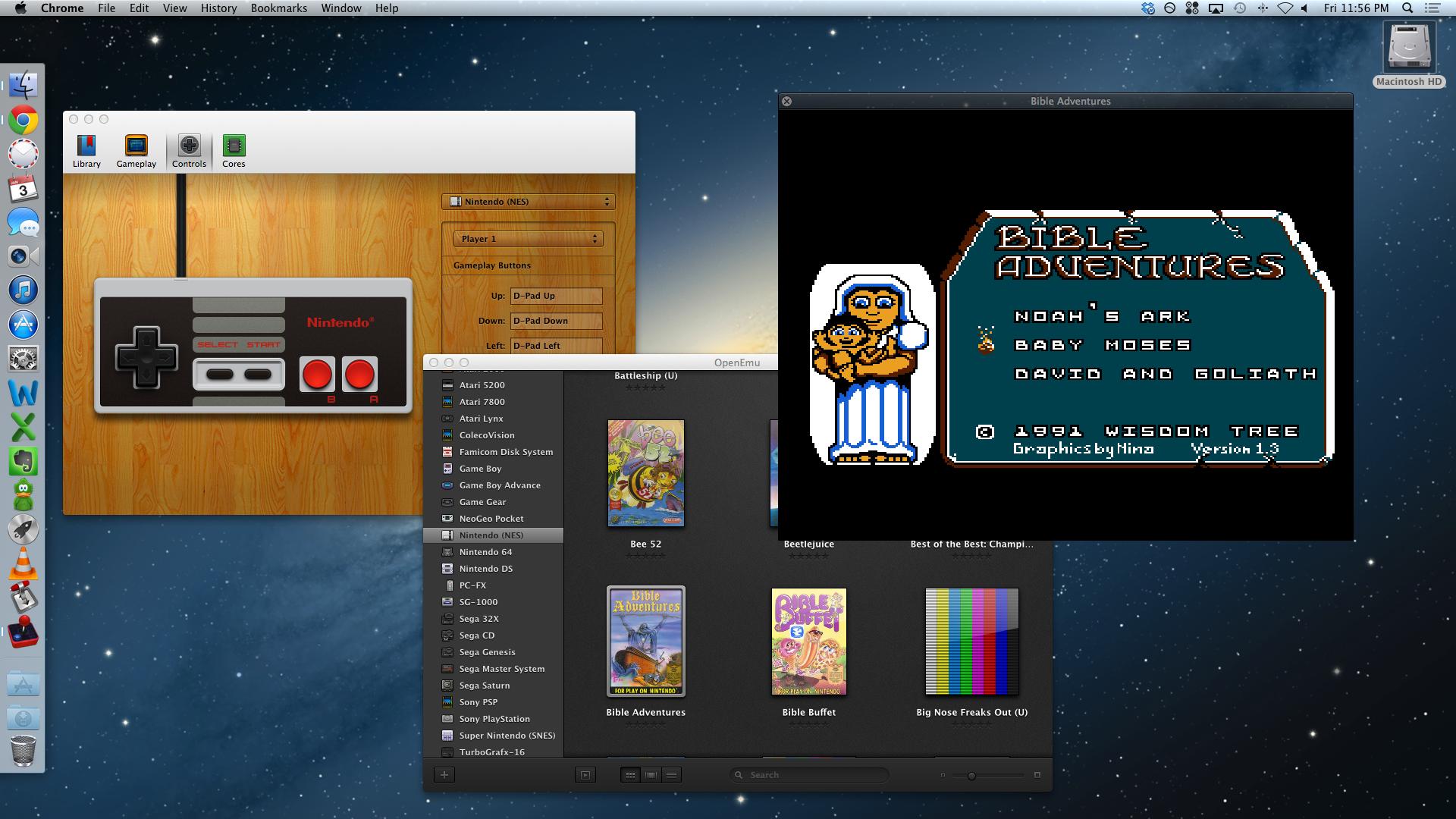 I've had a clear separation for a while now: Windows is for gaming, Mac is for everything else.* Well, in about an hour of testing I've determined that emulation of older consoles has a permanent home on my Mac. I hate the word "game-changer" but it's hard not to use it when talking about OpenEmu.

OpenEmu is essentially a front-end for other emulators, but no other manual downloads are required. Upon the first run, it asks you which systems you want to emulate and downloads the cores for them. On many systems, you can even dig into the settings and choose which core you want to use. Some people prefer ZSNES to SNES9x for example, and this is an easy configuration change.

The configuration is set to sane defaults but you can modify some advanced settings. Controller configuration is a real treat. As you can see from my screenshot (yes, that's Bible Adventures. What?) you're presented with a view of the controller and you can change what is used for each button. The PS3 controller (which works right out of the box on Mac. If I were more cynical I'd think Microsoft somehow made it difficult to get them to work on Windows intentionally) is automatically detected and configured as you'd probably want to configure it yourself, but you can tweak that as you like. You can set certain buttons to be quick save and quick load as well.

Selecting a system brings you to a list of all the games for that system you've added. You can choose list, covers, or cover flow. OpenEmu automatically downloads box art for anything it can find. It seems to pull from the filename so if you have a strangely named rom it won't automatically find it.

The gameplay itself is seamless. You can play windowed or fullscreen, and in windowed mode you can change the size just like any window and it will keep the proper aspect ratio. When playing a game, you can move your mouse to the bottom of the screen to bring up a toolbar like you'd find in a media player to exit, manage save states, enter cheat codes, etc. Best of all, if you exit and re-enter, it automatically picks up where you left off.

The current stable release has a wide variety of consoles to choose from:


The experimental version has support for many others including Playstation, N64, PSP, a wide variety of Atari consoles, and a ton more. The full list of planned support is here: https://github.com/OpenEmu/OpenEmu/wiki/Console---Core-Plugin-Status-&-Wishlist

It also has native support for many controllers, and some that require drivers to set up (like the XBox 360 controller).

I played various games on NES, SNES, and Genesis, and ripped Crisis Core: Final Fantasy VII from my PSP just to test out the emulation. That thing was dusty, but it was worth it. Everything played without a hitch. The graphical reproduction was solid, sound was good, controls were responsive.

In short, I have absolutely nothing bad to say about this. If you're interested in emulating older consoles and have a Mac, especially if you have a controller you can use, you should check it out! It's everything you've always loved about emulators, wrapped up in a nice package to ease configuration, and it comes with awesome features you never thought you'd need.

* Linux is for tinkering. I'd use it on my PC full-time if gaming were stronger, and it's going that direction. If you've been here a while you know how much I adore Linux but as of now it's sitting in between the two opposite strengths of Windows and Mac. I hope that changes very soon.

I have Bible Adventures, so it's fun to see you post that as one of the games you tried.

I will try this soon, thanks for posting. I really appreciate that this is free software and hope it gets ported to Linux as I think Linux could really benefit with a very well designed emulator.

Do you configure your controller once and it bleeds through to all the games or do you need to set it up per system?

I'm not sure how it works with anything but the PS3 controller but it was already configured for me. I just switched to the controller instead of keyboard once, and it worked as I would want it to for each console after that.

Just installed this and it works very well. Viewing all your games is simple and starting, saving and reloading the games is a snap.