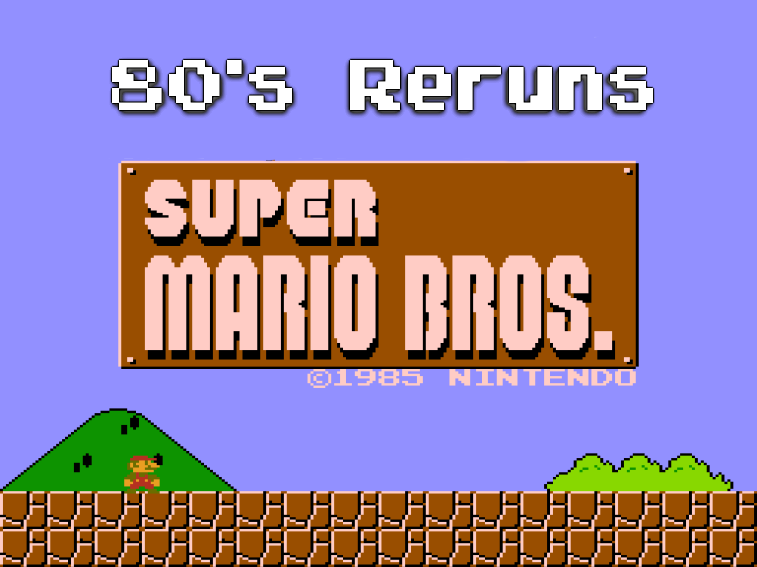 I have three functional NES consoles, and two of them are currently hooked up and ready to play. You could say I'm a fan. But nobody talks about these old games much anymore, even though the gameplay in many games holds up even in the present day. Let's do something about that. There's no better place to start than the game everyone played, Super Mario Bros.

Super Mario Bros. isn't the first appearance of Mario, or even the first Mario Bros. game, but it's the first introduction most of us had to the characters, and it's what most consider the first game in the core Mario series. It set the rules that platformers would follow even to the present day. There's no question about the influence this one game has had on the whole industry.

I used to love poring over instruction manuals for NES games, but one thing that sticks out for me with SMB is that it doesn't need one. In the first few seconds of the game, you learn the basics, and by the end of 1-1 you know pretty much all you need to know to get you through. If you run straight forward, you get killed by the goomba. Oh, you must need to hit one of these buttons. Whoa, A jumps, and jumping kills enemies, and makes things come out of these question mark blocks. And suddenly, you realize you've got the hang of it. But then the fun starts.

It isn't an incredibly easy game, but the difficulty curve ramps up nicely, and beyond being accessible, the mechanics are good. Even today, the physics in the game feel natural, and the challenges are well thought-out.

For the time, the graphics were decent, but they were impressive in how they convincingly made this world with such simple pixel art. And the music, especially that iconic theme, lives on in the Mario games even today.

Out of every game I've obsessed over since I first got my NES back in the 80s, this one still probably takes the record for most hours of my life taken up. Even the 550 hours I've put into Terraria or the few 200+ hour games I've put into Skyrim don't hold a candle to the hours I put into beating Super Mario Bros. over and over again. I was obsessed, and I still play it a few times a year.

I realized at some point in college that I almost always played it the same way, warp from 1-2 to world 4, and then warp from 4-2 to world 8, and decided to check out some speed runs. "I can do that," I thought. So for months, I rediscovered the game in a new way, trying to power through as fast as possible to get as close to the record as I could. I think the record at the time was around 5:30 (currently on SDA the world record is 4:58), and I was able to get down to around 6:30 before burning out. I never got good enough to be competitive with it, but it was a blast.

For this blast from the past, I decided to play through the game without warping, and I was surprised at just how much I had forgotten. 1-1, 1-2, 4-1, 4-2, and all of world 8 were still quite fresh in my mind, but especially world 6 and 7 were almost foreign to me. I could almost get through the 8-4 maze blindfolded, because I've done it so many times, but some of the later castle mazes are tricky until you learn the pattern. Overall, it struck me how great the level design was coming into it with fresh eyes. Like I said, I had forgotten so much so it all felt new again, and it was all well done.

This game is a classic for obvious reason. Even if it wasn't the bundled game for most of the NES's lifespan, it would have been huge. The technology available back in the mid-80s was limited, but Nintendo pulled off something truly special with what they had, and its impact can still be felt today.

Yeah, Super Mario Bros. was great and it's pretty cool how the series has progressed since it's release. I remember being a kid in the 80's and being introduced to the NES, SMB, and Duck Hunt. I didn't own a NES when I was a kid, but I did get the Gameboy. My cousin had a NES and I loved it when I visited and we'd play it. Those are some of my fondest memories as a kid. He still has it and his games and I often wish I had his game library. I do now own a NES, but I haven't hooked it up in many years. I only own a few games for it, The Legend of Zelda, Final Fantasy, and Monster Party. Still, it's cool that Nintendo has released some of the games on their Virtual Console.

I wonder which classic NES game you'll write about next. Perhaps The Legend of Zelda. =)

That one is on my list, but I doubt it'll be next.

I'm not sure I ever beat the original SMB. I'm not sure how far I made it through the game, but if I have beaten it, it was probably once and I doubt even that. I'm absolutely sure the amount of hours I've spent on the game barely even scratches how many you've put into it.