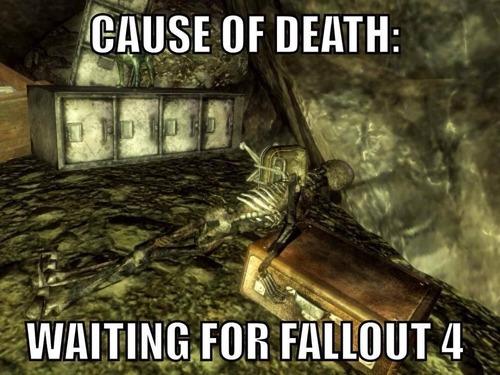 Bethesda is hosting their first E3 conference this year. June 14. Mark your calendars!

I present this without comment; speculation is naturally going to be out of this world. I think from the picture I chose you can tell what I'm hoping for, though. But they have something big to discuss, it seems.

* Doom 4
* Fallout something or other

I'm not sure what to expect other than another Fallout game. Remember when I played Fallout 3 this summer? I saw some of the news on that that guy who played "Three Dog" hinted at another Fallout game. That said, do any of you think there's a chance for another Elder Scrolls game? I'm not sure how well The Elder Scrolls Online is doing, perhaps at E3 they will be showcasing an update for that game or something else. It's kind of hard to believe we're already talking about E3 this early in the year, but this news means I may have something other than Nintendo to pay attention to.

Zenimax has announced that ESO is going free-to-play. This early in the game's life, that's not a good sign.

However, they still want to milk what they can from it, so I doubt there'd be a new Elder Scrolls announced this early. There were 5 years between Oblivion and Skyrim, though, so if they keep that gap, 2016 would be when Elder Scrolls 6 comes out.

Well that seems like good news for anyone who wants to give ESO a try. Still, I understand your point. On the flip side, FFXI is still not free-to-play. I wish it were though. i still have the game, which came with some expansion packs. I also got Wings of the Goddess for free (I won it from the Wiki) and I haven't really explored those expansions.

As for the timing you mentioned, then maybe there's a possibility that they'll announce development of a new Elder Scrolls game. Still, I think right now all we can do is to speculate about what their E3 presentation will announce or show off. Although, I think there's a very good chance we'll at least find out about a new Fallout game.

FFXI still isn't free-to-play because they're still making crazy money off of it. ESO wasn't, so they went the microtransaction route.

"Zenimax has announced that ESO is going free-to-play. This early in the game's life, that's not a good sign."

Cool, that means i'll give it a shot then. Free is always a good price. That said, I wonder if it will change for the worst? I didn't mind the F2P aspects of LoTRO.

While I would never pay a subscription for FFXI again, if it ever went free to play I would be all over that, even if just to occasionally see some old familiar sights. :D FFXI (and from what I hear, FFXIV) don't have the huge subscriber numbers as some other games, but the fan base they do have is very loyal. It seems they've found their niche and ran with it.

Once ESO goes F2P I'll definitely give it a shot. Going F2P isn't necessarily a bad thing if it's handled right.

I don't think I would mind that either. That said, if I had to pick between buying ESO or GW2 I'd pick GW2.

Same. The free weekend they did a while back convinced me there's a lot to love in GW2, even if it's just at the start.

C'mon Fallout 4, Commonwealth. Time to pay The Institute a visit.