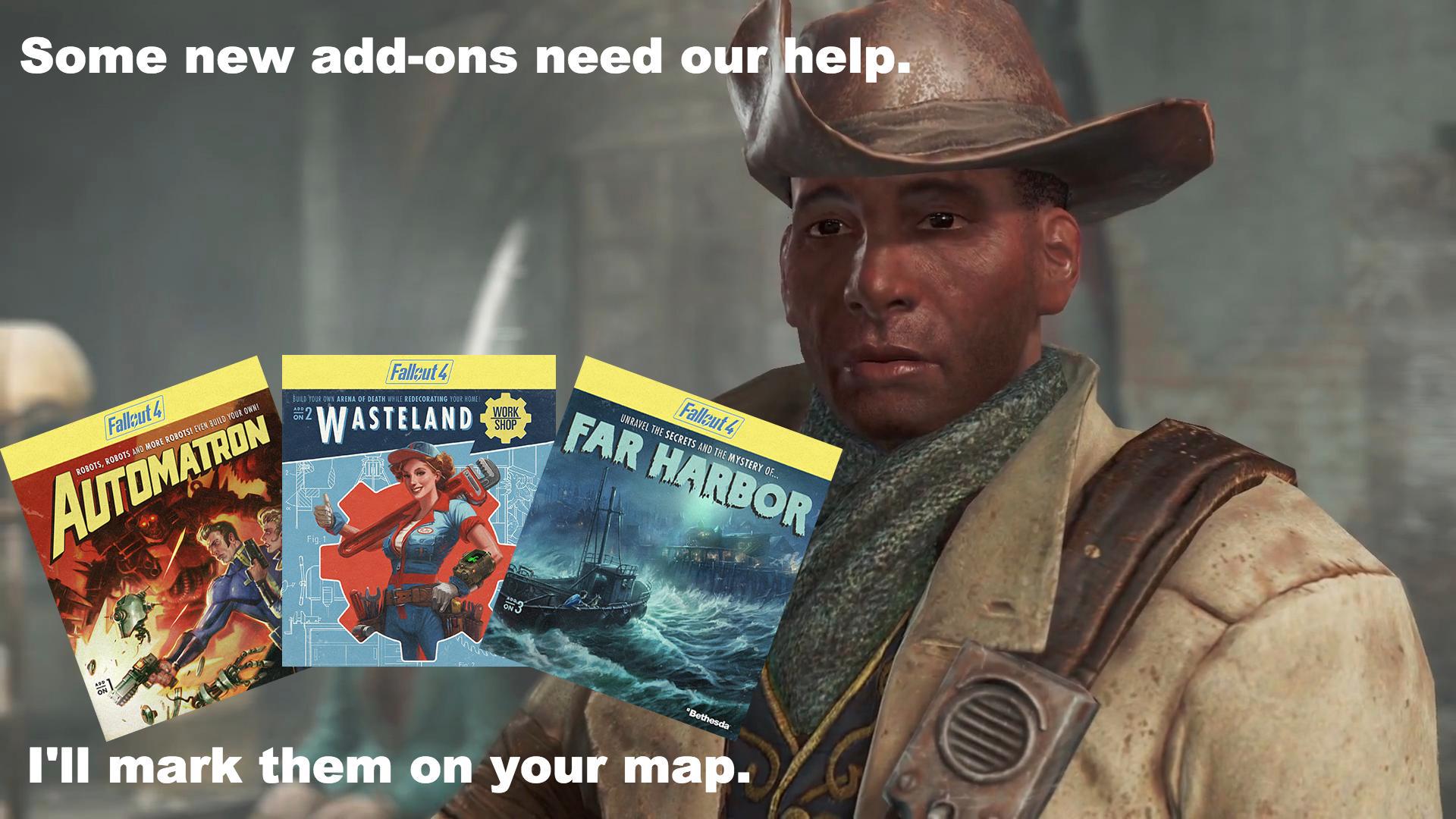 Bethesda has released some details on the first three DLC that will be released for Fallout 4. The first two are minor additions similar to the Hearthfire add-on for Skyrim, but luckily not as minor as horse armor.

Automatron: March, $10
The Mechanist (who you may remember from a hilarious Fallout 3 sidequest) has unleashed a horde of robots on the Commonwealth, and it's up to you to stop him. In addition, you can harvest their parts to make your own handy robot companions, with hundreds of options to choose from!

Wasteland Workshop: April, $5
In addition to adding new options to settlement building, this add-on lets you capture creatures from the wasteland, and tame them or run your own fighting pit.

Far Harbor: May, $25
This one looks beefy. They say it's the largest add-on they've ever created, so this seems to be more in line with the Shivering Isles expansion to Oblivion (literally the greatest DLC ever released) rather than the smaller chunks we've gotten used to in modern Bethesda games. Far Harbor takes you to Maine, where Valentine's Detective Agency sends you to investigate a missing person and a synth colony. This one also includes higher level weapons and armor for you to slaughter your enemies more easily. And we can hope that there are more settlements that need our help for Preston to mark on our maps.

Bethesda also stresses that these aren't the only add-ons coming to Fallout 4; they're planning $60 worth of content in 2016.

If you're planning to get these, you should grab the season pass now. They're making more than initially planned, so on March 1, the price is going up from $30 to $50. Still a better deal than buying them all individually, but $30 is better than $50.

Want to try these out early? Sign up for the beta! https://account.bethesda.net/en/settings/beta

In addition, Bethesda is hard at work on the Creation Kit and some Survival Mode changes. They plan to continue releasing free content/mechanics updates through patches. The most recent patch added weapon debris for video cards that can handle it, added visual cues to help determine where settlers are assigned, and more, along with fixing some bugs and making some performance improvements.

Lots to look forward to!

For the most recent patch notes: http://fallout.wikia.com/wiki/Fallout_4_patch_1.3

FYI: If you get it through greenman gaming you can get 20% off using this code: FEBURY-SVINGS-20PERC
http://www.greenmangaming.com/

Since we don't know what extra DLC they are adding it's hard to say how great this is going to be and based on past Fallout DLC I am not so disposed to think this will be better than the main game stuff. That said, from what they've talked about so far this seems like a solid dose of "more of what people want." More building stuff? Check. More missions featuring robots? Check. Wasteland Pokemon simulator? Check. Huge new campaign in a totally new area? Check. All that seems like a solid $30 value but the Fo3 DLC was hit or miss for me so I have some reservations.

The part that's harder to gauge is the extra content. They say it's a solid $60 and I trust that intention so I am really curious what it's going to be. Simply based on what we know now the $30 is a good value and just one more DLC would still make it a good deal.

Anyways, I wasn't planning on getting it but with the Greenman deal plus the price jumping to $60 later I pulled the trigger.

I haven't been disappointed with any Bethesda DLC (not counting horse armor). Some has been better than others, but they've all been solid (except horse armor).

Horse armor? That sounds fun. How could horse armor be bad?

You know, horse armor gets shit on a lot, but it was a good addition to the game. It just shouldn't have been as expensive as it was on launch, that was the problem.