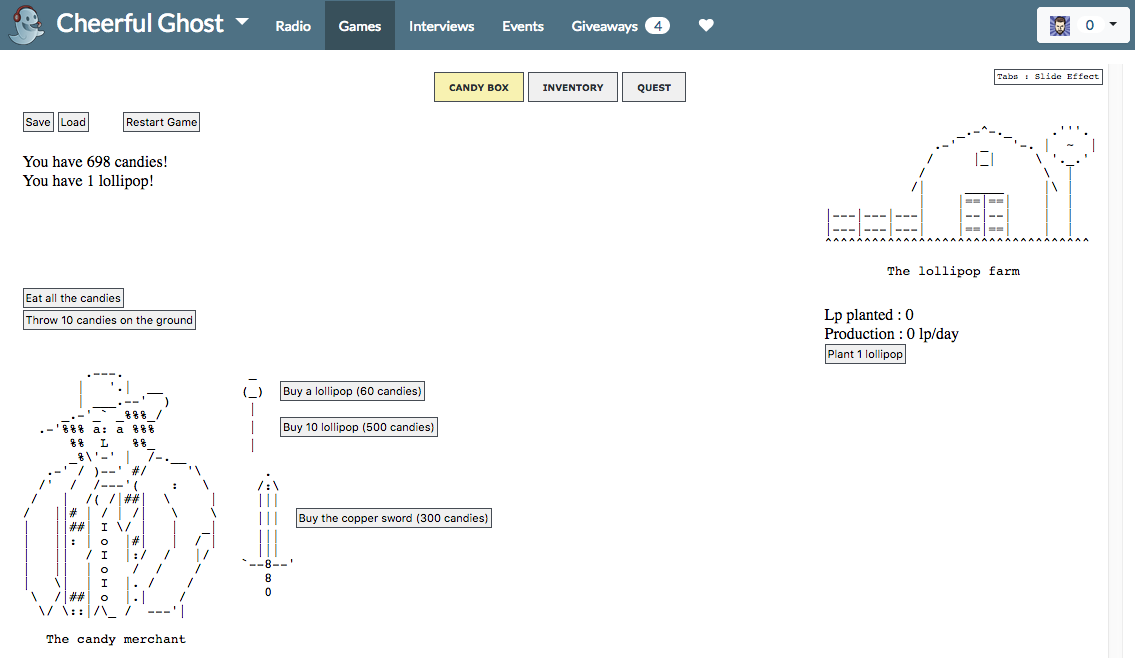 Travis gives this an astounding "Must Play" on the Ghost Scale
This achieves something special, and it would be a shame to miss it.

Travis gives this a "Must Play" on the Ghost Scale
This achieves something special, and it would be a shame to miss it.
Candy Box is a tricky game to explain. Jon told me about it. the other day and I tried it out, and I was initially very confused. It's a candy counter that constantly goes up right? And you can either eat or throw the candy? That's all? What's the big deal? But you realize something else is behind the initial facade when a merchant (who looks like the fourth Doctor in ASCII) shows up to sell you things. The game does not tell you what you can do, and the merchant is no different. You don't have the option to buy things until you have the candy for it. But when you buy a wooden sword, you get your first glimpse into this game's surprisingly complex mechanics.

I don't want to give too much away, because the discovery of what the game is all about is part of the fun. But in brief, Candy Box is an RPG/Adventure style game. Candies and lollipops are your currency, which you use to buy things for quests. But on top of that you're managing your income of candies and lollipops like you might in a Cookie Clicker style game, only in Candy Box you don't have to keep clicking. Part of the game is idling, especially at first, so it's a good game to kinda keep open and flip back to every hour or so.

Candy Box 2 is more of the same, but things are balanced better, and the gameplay has way more depth. Definitely play the first one before you play the second one. Again, I don't want to say much about the changes in the sequel because so much of the fun is in discovering what you can do.

I found myself wholly engrossed by these games. They aren't super long, you can complete both in the span of a couple of days, but a significant chunk of that is idling while waiting for your candy/lollipops to build up. But there are multiple wikis, walkthroughs, and Youtube let's-plays of it. There are arguments over the best strategies for accomplishing certain tasks. The game is written in javascript, and there are a few instances where it really seems like the developer expects you to cheat by using your browsers developer console to find the right values for something (but you don't have to).

There's so much depth here that a review can't, and shouldn't, show. This review is short, intentionally, because going into too many specifics would ruin it (I may have already said too much), and it's an ASCII based game so a lot of things reviews normally talk about (environment, graphics, sound, controls) don't really apply here. It's stick figures and buttons and a strange, compelling, satisfying gameplay loop.

If you haven't played these games, you need to play them right now!