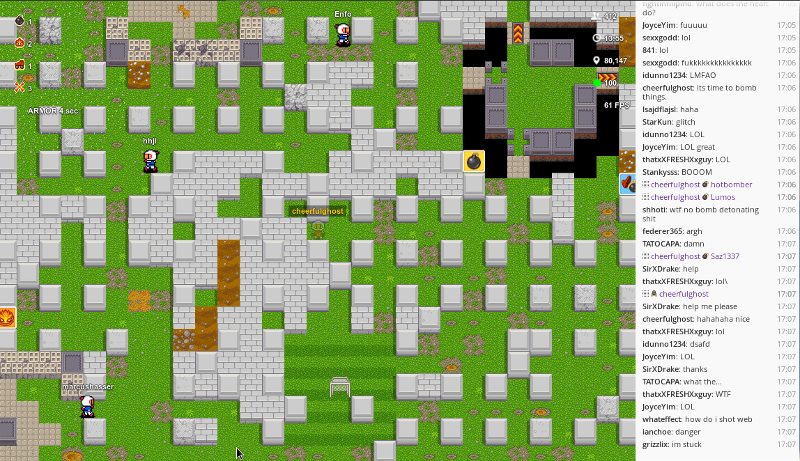 As browser technology advances I am really surprised at the level of awesome games people can create using HTML5. Take Bombermine, a new Bomberman clone that works from any modern browser. It plays as well as the 4 player version I had on Super Nintendo but Bombermine throws the crowd capacity of the Internet into the mix.

Dueling with someone Bomberman style from different parts of the world is a pretty awesome thing and occasionally as I was playing things got a little frantic. The game is in beta right now but the multiplayer rosters seemed quite full so there should be no problem finding people to throw bombs at. At one point I found a mystery item that turned me into Kenny from South Park. I couldn't drop a bomb but if I touched another player they would become Kenny for about a minute too. An interesting debuff as the only thing you can do as Kenny is evade others or... be killed.

You should check out Bombermine because of nostalgia and because you wanted to blow things up, if only for a few minutes at least.

**update** Looks like Bombermine has been rebranded as Game of Bombs.

I actually just played this for the first time yesterday. It's crazy fun. I found myself getting nostalgic though and busted out the Gameboy Color for some Wario Blast.

Nice! Somehow I had a dream last night about finding a Gameboy at a Garage Sale and then finding Battletoads... It was a good dream and I realized I need to get an original Gameboy in some way now.

I have both an original GB brick and a teal GB color. I have never bought another handheld. I intend to break that streak and get a vita if Sony proves they are aware of its existence.

Hahaha, yeah it looks like a good handheld. Too bad its hard to mod right now. I kind of want something easy to mod and can play.. anything. Don't mind paying for games, but I don't need to own yet another locked down thing.