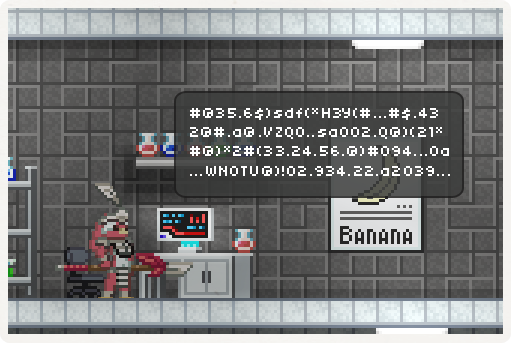 Starbound is a really exciting looking upcoming open ended sandbox in space. You can read some of my thoughts about it here as a primer:

Recently the Starbound folks have released The Starbound Chronicle: Issue 1 that highlights some of the recent activities in how the game is progressing. In this issue they talk a bit about how in game Armor mods work:

"The effect of armor mods varies hugely. From armor that glows in the dark, to armor with a built in defib that activates if your energy bar is full when you die, shocking you back to life."

The game seems to be taking a turn to allow the game world a bit more depth by allowing the in game races quote a bit of back story.

"Another area of the game we've been focusing on recently is fleshing out the history of each race in Starbound and building a deep and compelling lore.

Starbounds lore is presented to the player through books, logs, papers and other materials found in the game world, as well as conversations with NPCs who will change what they say based on your race."

They end the Chronicle with a few emails from the community and drop news on a in John McCain race. At least its not something to do with cats I suppose.

Very excited for Starbound to drop and as soon as they post anything about release dates you will be the first to know.

I signed up for the newsletter right when they released it. And I've been following the Starbound development for a while now! That game looks amazing and I can't wait until it comes out!

I totally agree. Supposed to be this year, so heres for something soon!