An Awesome Old Coat: Link To the Past Playthrough 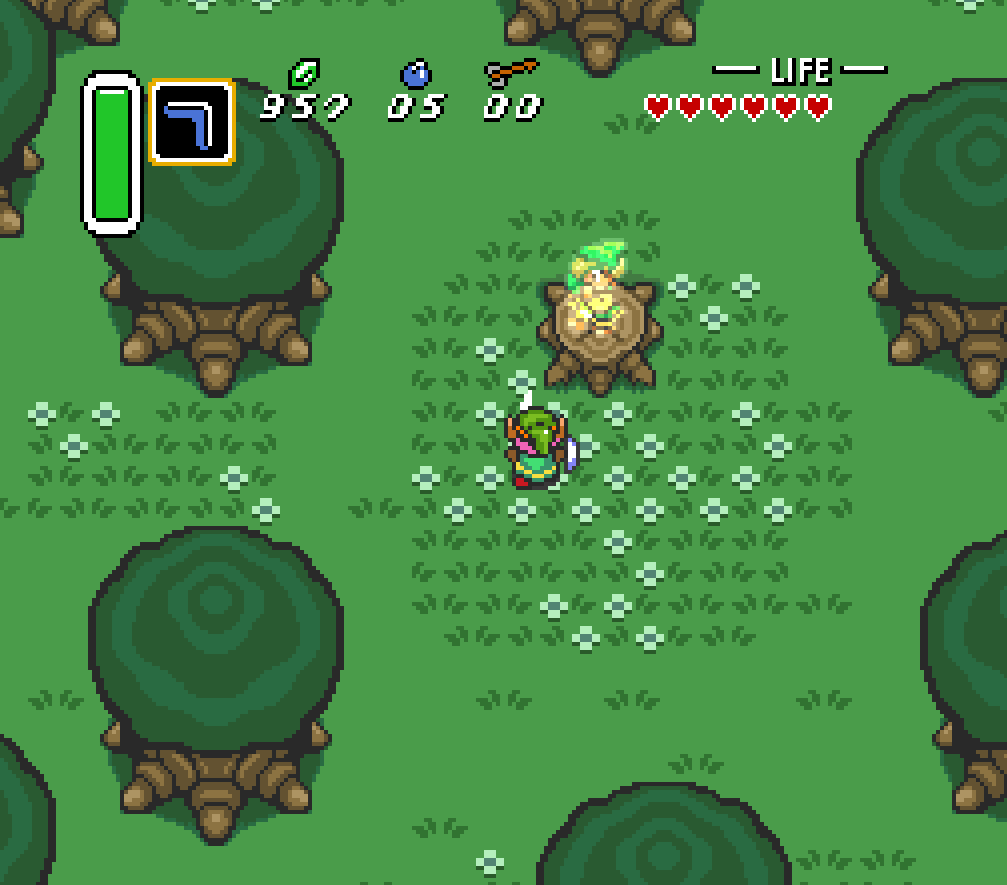 On a lark yesterday I decided to start a game of The Legend of Zelda: A Link to the Past. I was kind of deciding between games and picked out a classic. At first I thought I might really only play it for a few minutes of nostalgia, but after I beat the intro I decided I was up for more.

As I have been playing more modern indie titles that use pixel-art or try and riff the Zelda motif I have noticed they do quite a good job of harnessing that tone and style. After playing the first bits of Link to the Past these games seem a bit further away from the absolute amazingness of this game in particular. I am not saying modern indie takes on the retro 2D games are bad, far from it. But there is a level of polish with this game that few games achieve and its worth noting that even 22 years later that still comes across strongly.

I never noticed this before, but as I first entered Kakariko Village, the game gives you waypoints of sorts. Zelda didn't invent this perhaps, but I can't remember a ton of games that did this before Zelda and they are super useful. Not that I need them, so far I have completed much on pure reflex memory alone, but they are interesting to see and compare to games made now.

The Legend of Zelda: Link to the Past was one of the triple A releases of the day and as such the level of polish and game design is superb. Blowing the game up on my widescreen TV(but in fullscreen aspect ratio of course) I can see more detail than I otherwise did on my ol CRT. Since I am not a barbarian, I don't set the pixels to smooth out and experience the game in all its blocky pixel glory.

The superior game design comes across right at the start of the game in how it guides you along and teaches you the gameplay as you go. Feeding you easy puzzles that teach you the basics as it slightly changes them is a really nice touch. As a kid I flew through the dialog and now find myself reading it more now and taking it in at level I didn't really appreciate as a youngster. Not that the writing is very good, its passable, but I want to soak in more of the game and its interesting to take in the words in a way I haven't before.

My one complaint about the game, if its even a complaint, is the game isn't as deep in lore and story and I would like a bit more. Opting instead to have the player mostly piece the story together based on what they do, the game delivers you a great couch and popcorn experience but I am finding I want a little bit more "Hyrule by campfire."

Before I started the first light world dungeon I had already collected 5 hearts, 2 bottles, the net, bag of magic, bombs and the lantern. As I was coming up to the first dungeon I realized Link was moving rather slowly and one of the things you get after the first dungeon is the boots that allow you to sprint. Again, more absolutely awesome polish here because just as you start to realize you move slowly you get the ability to sprint.

I plan on posting more of my thoughts as I continue my quest through Hyrule. As I was considering what to screenshot for this post I decided to do the flute boy. I couldn't snap the picture with all the animals around the trunk, but got him as he was fading from view. By the end of my first playthrough I completed the first dungeon and just nabbed the icerod. I also am nearly maxxed out on Rupees, those really were fairly plentiful in Link to the Past.

You really should mark this as containing spoilers! Sprinting boots?!? Way to ruin the surprise man.

But really, this was such an amazing game! I've been meaning to play through it again as well. I think you're right about the polish vs today's retro games. Back in the day, the paradigm was "How can we make this look as amazing as possible?" They weren't constrained by anything but technology. These days we have so much more potential, limiting ourselves to a "retro" look is quite limiting, and that comes across in some retro style games.

I can be limiting I suppose depending on the game. I think some are just using that style, but Nintendo has certainly moved on for sure.

Spoilers, yeah I guess for some it totally is. Not everyone played this for sure. Especially new gamers.

lol, I really don't think you should put a spoiler alert for sprint shoes ;)

I agree. Many of the retro 2D games now days go beyond the original limitations of the SNES and I think that's totally fine. Its the vibe the graphics produce for me, not the limitations of the platform. Then again, art through adversity and all that.

I think there are many good reasons why this was #1 on Nintendo Power's list for years.