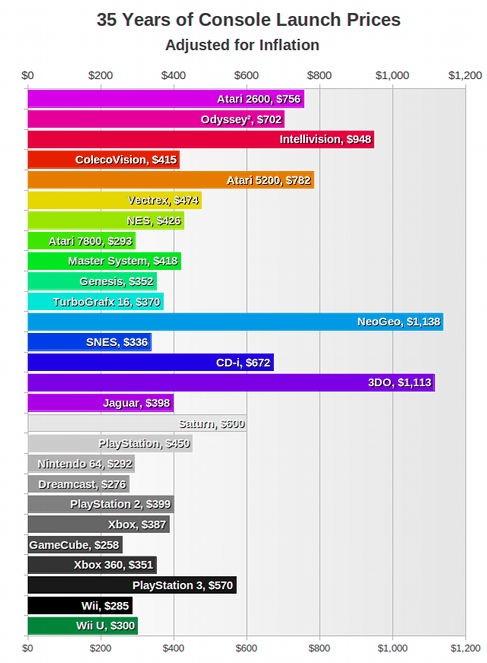 Whew, did anyone buy own a Neo Geo or 3DO? I remember totally thinking it looked like hot shit in the store but I can't think of any game people really raved about on those platforms. What impressed me most about the 3DO was that it could play video in a game, that totally blew my mind. Come to find out just slapping some video in a game didn't really make it awesome but then again how else would we get games like Sewer Shark?

I picked up a PS3 well after its launch and on a pretty awesome sale for $250. It came with Guitar Hero III and a $50 Best Buy gift card a very good deal. Now I am wondering how much the PS4 and Next Box will ship for on launch day?

Wow, Sewer Shark ... I was so excited about that game, until I was able to play it in store and was bored after 15min...

Yeah, some games don't always translate to be as awesome as they seem at first. I am kind of glad my parents didn't have a ton of money to spend on the latest "hot" consoles as if I had my way I would have bought that junk.

The one I had a hole in my heart for was the Game Gear. Never got my hands on it, but spent a couple years just imagining how awesome it would be to have video games somewhere other than home. Funny to think how these days the more novel experience is being somewhere you *don't* have access to video games.

The Game Gear was cool. A friend of mine had one. The color part was pretty epic but it had a few downsides to the Game Boy.

* It was huge compared to the Game Boy. Makes sense, it had a color screen and all. But it felt really big in my junior high hands.
* Mortal Kombat was really choppy and slow. None of the Game Boy games I played felt like that.
* If memory serves the battery life wasn't as good. Again, more things to power so that makes sense.

I wasn't really thinking about battery life, and never saw Mortal Kombat. The real big comparison I had to make was between the Game Boy's Mario game - cool, but not whoa - and the Game Gear's Sonic the Hedgehog, which at the time was pretty Whoa.

Yeah the Mario Land that shipped with the Game Boy is pretty low rad compared to sonic on the Game Gear.

That said, the Game Boy launched a year earlier than the Game Gear and compared to the Tiger Electronics handhelds, the Game Boy Mario Land was mind blowing. That said, many games came later like Link to the Past and Warioland 6 Golden Coins that really showcased what the Game Boy could do.