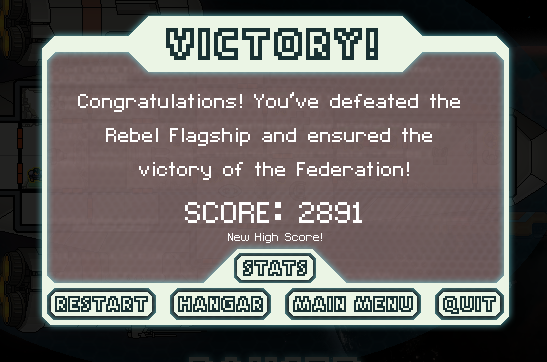 Tonight CapnCurry and I beat FTL together in our pairing session. FTL pairing is where two people both make choices for how to play FTL together*. Since FTL is a turn based game its setup well for this. Since I was the less experienced player I controlled the game on my end and we used Google Hangout to share my screen and talk to figure out our strategy. The session lasted about 3 hours in total.

From the start things were going pretty well. One choice about mid way through the game, I believe helped us out considerably. We had our drone system built and two drone weapons on board. We made it to a space station and if we sold off our two drone weapons and our FTL jammer we could afford the cloak. We decided to take the cloak and that was a really good gamble. As it turned out we found more drone weapons later so the gamble really paid off.

Since I only unlocked the Kestrel thats the ship we went with and it proved to be good enough to beat the game with. I sort of figured that you needed to get the other ships to win, but the Kestrel held up like a champ.

I think a few items really sent us over the edge to survive the 3 end boss fights. The Cloak, The Pike Beam and the small bomb. Basically we would hit the boss with the bomb, then do a double salvo using our laser weapons. When the shields were down we raked as many rooms as we could with the Pike Beam and that was all she wrote for the boss.

I want to thank CapnCurry for pairing with me because he really showed me a bunch of useful strategies for FTL. I want to give him a lot of the credit for the win because his strategies were really effective. That said, I was controlling things and we did win so thats also rad.

That said, I had a blast and am looking forward to the next pair session. PS if you can and want to learn your way to a better life and FTL there is no substitute for pairing with the Captain.

We scheduled our pairing session with the new Cheerful Ghost event system. You should do the same.

* I am fairly certain we invented FTL pairing too, so you know thats also awesome.