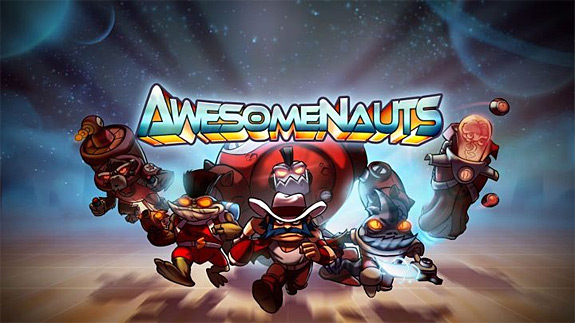 After Humble Bundle 8 dropped I picked it up and after thinking it over decided to play Awesomenauts first. I had heard from people on the site that this is a good game, plus I see people playing it on Steam all the time so I figured it was time.

While I was at University I played a fun Warcraft III UMS map called Defense of the Ancients. That made it into our LAN rotations among other Tower Defense maps and regular ol' War III. I really dug DoTA but never was exceptional at it. Fast foward to today to the more modern DoTA 2 and League of Legends and whereas the core idea is fun, the immense difficulty ramp is not.

Intro Awesomenauts. It comes packed with all the Tower / Hero destruction fun you could want in an easily accessible game. That doesn't mean the game isn't challenging, but it doesn't throw you straight into the pits of hell to start. The game starts with a simple tutorial that covers how to play as Lonestar, a good overall character. From there you can head to practice matches against bots.

As you play matches you gain EXP that unlocks the other characters in the game as well as other arenas to fight in as well as some special attacks. The first few matches I played as strictly Lonestar and then Gnaw & Derpl Zork. Derpl Zork and Gnaw are really fun.

One thing worth noting is that Awesomenauts is playable on Mac, Linux and Windows such that when you pickup the game later on another OS your progress is saved. I imagine it employs some cool Steam cloud wizardry and it works very well for you all that bounce between multiple OS's like I do.

Head over and nab the recent bundle to get a slew of other great games and... Awesomenauts. Oh and if you are into Awesomenauts, checkout our Cheerful Ghost event on Friday for the game!

A very fun game! I really enjoy playing as Voltar. He's a healer, but when powered up, can do good damage as well. Pair him up with Derpl Zork and become a wave of destruction!

Yep, that combo was so much fun. God bless Derpl Zork.