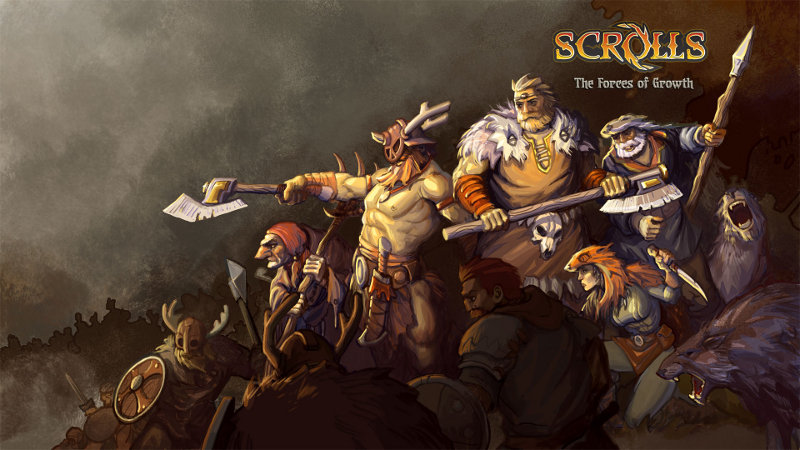 I have been eagerly awaiting Scrolls, the new Collectable Card Game by Mojang for quite some time after it was announced. I wanted to tuck a bit of time under my belt before writing about it and feel like now is a good time.

After buying Scrolls I needed to merge my Minecraft account into my new Mojang account. This makes sense as what Mojang is doing now is having an umbrella Mojang account be the set of credentials that gets you access to all your games. So now, I can access Scrolls and Minecraft with the same information. After you get that all sorted out you can start playing Scrolls.

Scrolls is a 1 on 1 card game where the goal is destroy 3 of the opposing players idols. The game is played on a hexagonal battlefield broken up into 5 lanes. Scrolls differs from other CCG's in that you don't start with energy, you must sacrifice cards to obtain it. Its a interesting mechanic and I like it quite a bit.

Each new player starts by selecting one of three pre-constructed decks and I selected the green deck. As you play matches you win gold and you can spend the gold in the game store for cards or packs. I seriously recommend saving up for the packs as you get more cards for the gold you spend. You can drop real money to buy shards and coupled with gold allows you to buy the other pre-constructed decks or specific cards. You don't need to spend real money to get all the cards as you can stick to buying packs with earned gold.

I have been playing practice matches on Easy and find that offers plenty of challenge for my current Scrolls skill. Even in easy, the game isn't trivial even if the computer isn't too smart. Sometimes the luck of the draw can really hinder your win, just like in any CCG.

The game features a pretty robust deck builder and you can build a seemingly infinite set of deck variants on the cards you own. After opening a few packs now, I have some interesting choices and plan on making a few variants on my pre-constructed green deck.

If you love collectable card games and want to try a well polished take on the genre, you should give Scrolls a look.