RollerCoaster Tycoon: A Game I Will Play Forever 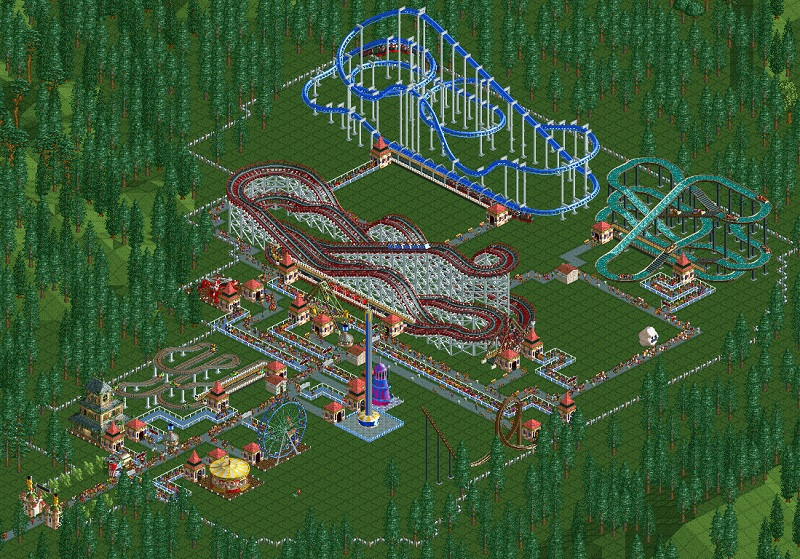 RollerCoaster Tycoon was released about 14 years ago but it still lives strong on my modern gaming computer. My wife bought the game and both the expansion packs at a garage sale for me many years ago on a lark. She generally doesn't do that so it was a nice surprise. At first I set aside the game because it looked like a game for pre-school kids. After a few months of it kicking around the house I decided to install it and was immediately hooked on it.

RollerCoaster Tycoon takes the Sim concept and mixes it with the awesome mechanism of running a theme park. The game consists of scenarios, each you must complete to unlock the next. I believe on of the latter Tycoon expansions opens up a "open sandbox mode" but the main game focuses on completing scenario objectives. Many of them start you with some kind of park and require you to build it up to a certain point. Others focus on your "fixing" something wrong with the park but they all seem to need you to get to a certain park rating with a certain number of guests in attendance.

I pull the game out every so often and play a scenario and always have a good time. The game is quite old but still runs on Windows 7. I don't look forward to the day when the game isn't playable on Modern Windows but until then, it works just fine.

Some news surfaced recently about the game getting a modern port to phones and I am pretty excited about that. Hopefully with its renewed interest it may get the PC HD treatment for a release on Steam with all the bells and whistles.

The screen shot above is of a recent replay of the first scenario Forest Frontiers.

Man I was playing that last night. One of my favorite parts of it is that it's a game you can focus completely on or do other things at the same time. Most of the time when I have it running, it's on the left half of the monitor with Netflix on the right. This needs an HD reboot.

Thats a cool way to play it, I should remember that when I am watching a movie.

I just got done playing this haha. But I was looking through the android store for games to put on my tablet and noticed that there is an openttd port on the android market. I played it for a bit and once you get used to it, it is actually very easy to play and has all the capabilities of the pc version. I figure if they do the same thing for roller coaster tycoon, it will be just as easy, if not easier, as the openttd mobile version.

I also vote for HD version.