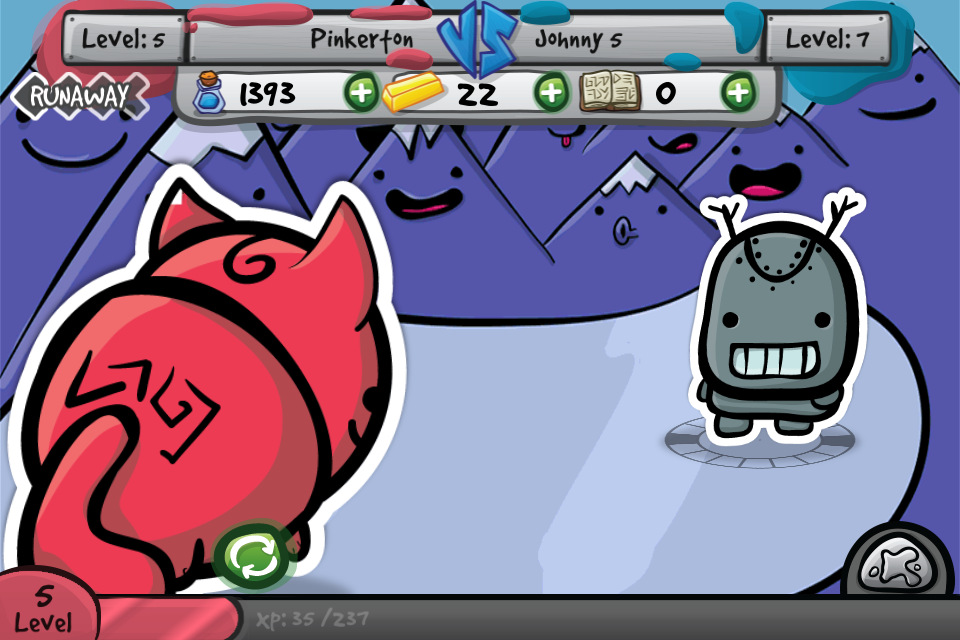 Monsters Invade Oz is a brand new iOS free to play mobile game from LittleBox Apps. This Pokemon influenced game allows you to play as Dorthy making your way through Oz all in the pursuit of Pokemon influenced Monster collection.

The game features a very detailed hand drawn ascetic that I really came to enjoy. Dorthy, Toto and the Monsters are all drawn well to the credit to the games artists. I found the visual makeup of Oz to not be on the same par and found it a little cold. Occasionally the land features a little Gnome or apparent NPC and at first I figured this was something I could interact with but it was just scenery. In fact, most of the Oz backdrop is this way and I found myself mostly ignoring it because it had little impact on the game, story or tone.

So far I have played the game for a few days now and have collected about 8 monsters and gotten each one up to level 5. I had to do this by going back and fighting in earlier parts of the game because my Monsters were lower levels that the monsters at the furthest part of the map I had explored. I was having fun progressing in the game and collecting things to advance in quests but my Monsters and I got our asses kicked because I wasn't a high enough level to proceed.

The game is free to play and it makes its money by selling you in game items. I think free to play is a cool way to make a game but find this one to be more overtly annoying than most I have played. The game asks you so often it seems really out of place compared with Candy Crush or Farmville.

In some places the game doesn't pop up a message to confirm if you want to buy something with gold. Since there is no confirmation screen, I bought things I had no idea I bought and thought I lost gold by accident. I realized later I accidentally touched to buy something but found that even though I tried my hardest, would occasionally buy things on accident. If I accidentally spend gold on things I don't intend, I am not sure why I would want to spend real money.

When I originally saw the previews for the game I liked the idea of a game that was in Oz featuring Dubstep as the score. As I played the game more I realized this worked well for the trailer, but not the game. The music doesn't feel right with the game somehow and I think a more classical or ambient score would have done better. That said, the games music got a bit too hard to take and at one point I wanted to mute it in game but there is no option to do that.

The Monster battles offer an interesting mechanic in that you have a slider that goes up and down in battle and when you tap at the right moment three times in a row you get a chance to do extra damage. This is a really fun mechanic and I enjoy tapping at the right times to pull this off. The Monsters are visually different from one another but offer nothing different in terms of attack or strategy. I expected to have some different in Monsters in terms of attack but nothing like that was available in what I played.

In the end, Monsters Invade: Oz is a interesting mix of Pokemon, Oz and Dubstep that doesn't quite fit together in a way that I love. Do I want an awesome Pokemon influenced game on iOS? Yes. Do I love games with hand drawn art style? Hell yes. But the way in which the game couples these together didn't amaze me. That said, I believe this game will find its audience and if you are looking for a free to play Pokemon styled adventure game through Oz, you should check this out.