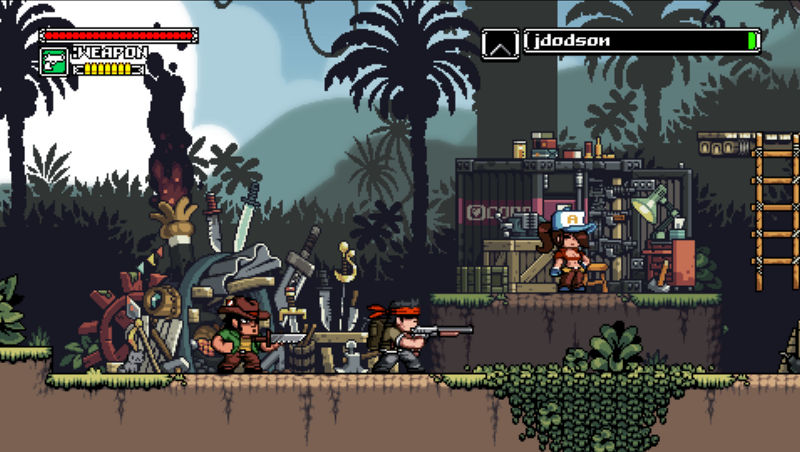 I picked up the Steam early access of Mercenary Kings last week and have been very happy with Tribute Games latest shoot fest. Since the game is an early access release it lacks some of the features and polish that it will showcase when it reaches its final launch. That said, the game is very playable and very fun.

Mercenary Kings is a 2D side-scrolling shooter in the style of Metal Slug. You start at your home base and from there can go on missions, craft guns, purchase items, form multi-player teams and more. The aspects of the early access version that shine for me are the gun crafting and missions.

During each mission you kill a swath of bad guys. Randomly these bad guys drop loot such as lead, polymer or acid. You can use these drops to craft gun components. You can use the components to make a gun build that suits your fancy. This is a cool feature because instead of crafting a gun and then scrapping it for another one later, you can just rebuild your gun to meet your new specs. So if you want a pistol with 80 rounds one mission and a shotgun the next you can do that.

The missions are fun and offer some nice variety. As you complete the missions under your current level sometimes you unlock other missions where you go back to a particular level to accomplish another task. One feature I really liked was the ability to go back and replay a mission as many times as you want. I found that useful for collecting cash and resources to craft certain gun components I wanted before tackling harder levels.

So far, I have run up to one boss and it was very fun. All told it wasn't too difficult, but it was the first boss I found and I am still a low level.

Right now the only controls supported are with a USB controller and I believe the best support is through the 360 controller. I recently read a blog post that mentioned keyboard support is coming in a patch soon so if you are keyboard bound it won't be a problem for long.

If you are looking for a great retro flavored 2d side scrolling shooter with a few rough edges, I heartily recommend Mercenary Kings.