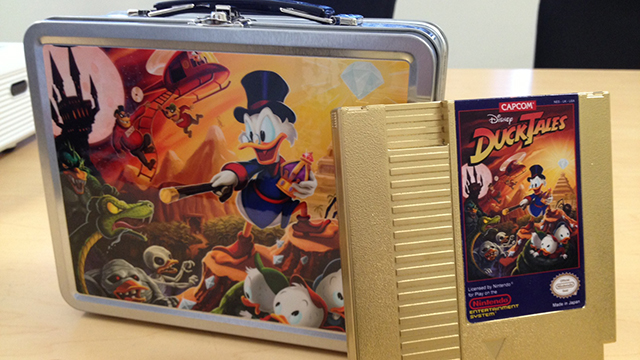 "In anticipation of next week’s release of DuckTales: Remastered on PSN, Nintendo eShop, and Steam, and next month’s release on XBLA, Capcom sent a special package out to remind some of us of those great childhood memories we might’ve had playing the game.

Upon opening it, to our joyful surprise, we found the contents of the box were possibly as valuable as the whole of Scrooge’s moneybin. The lunchbox had been holding a limited edition golden NES cartridge for DuckTales (ours was numbered 107 of 150). Now, we don’t know if the cartridge is actually a legitimate, playable cartridge, but it has contacts and is well put together enough that we at least vow to bring an NES into the office tomorrow to try it out."

So it seems Capcom has released 150 numbered limited edition DuckTales NES Carts. First off, this is amazing, second off I am kind of upset I won't get one. I wonder how much these will eventually sell for on EBay? Oh well, maybe i'll see one at a future retro gaming expo or something.

Omigod. So much awesome. They should do a limited run of these and sell them, I'd pay more than I'd care to admit for one.

I agree. I was thinking a limited run of a few thousand, I imagine they would more than make up for the costs.