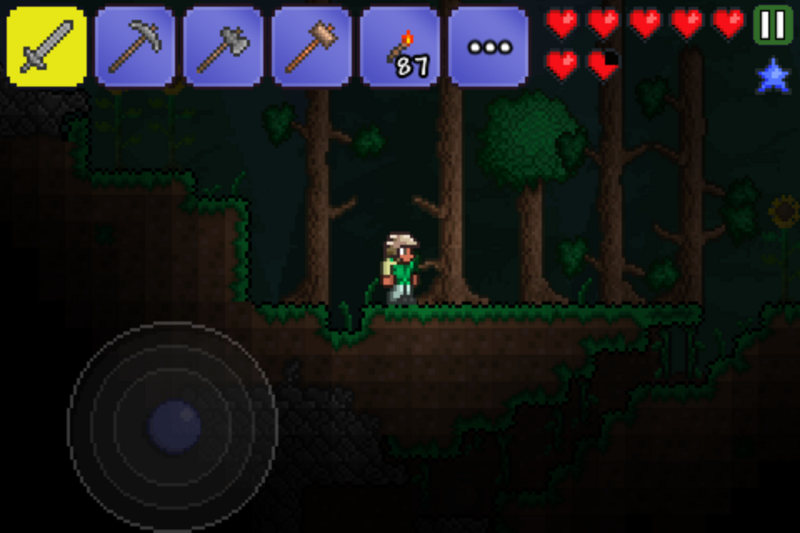 At the end of last month Terraria came to the iPhone and iPad. 505 Games, the company that ported Terraria to iOS plans to bring the game to Android but right now, it's only available on Apple devices. Since I love Terraria and have an iPhone, I bought the game the second it dropped in the iTunes store.

I don't have much luck with games I love being ported to the iPhone. That said, 505 Games has really done a great job with the Mobile port as it really captures much of the fun of Terraria. My only major gripe is that the game is not quite as easy to control as the PC version, but its pretty damn good considering the touch only interface. But don't take my word for it, check out the iTunes reviews. The game is doing so well it has become an iTunes Editors Choice game, which is to say, it has turned quite a few heads.

That said, the port aint perfect and occasionally it's hard to jump or navigate the world. I have run into a few bugs and work around them, but the vast majority of my experience with Terraria on mobile is good.

You can't port a PC game to mobile without making changes or else the game would be bad. Terraria is no different here and the changes are noticeable. All told, they are mostly all for the better but it's good to know what they are. The game is quite a bit easier on mobile. On PC if you don't build a house in your first night, you will die. The mobile version spawns less slimes and zombies such that night isn't that much of a problem.

Your player emits a pretty bright light at all times making it less useful to drop torches. I still drop torches, but the bright light emitted from the player really doesn't make them as useful. (The screenshot I took in my game above, illustrates what I mean)

I have also found that resources seem much more plentiful in the mobile version. This isn't a huge deal because I imagine people are less inclined to want to spend hours digging on a phone.

Doors automagically open for you and you auto jump when you reach terrain you cant walk over. This basically means you can hold down the left direction to move and you auto jump over anything easily. This is a really nice feature as the left screen is for movement and the right screen is for digging or attack. Swiping up jumps you but I don't do that as often as I thought i'd have to with auto jump.

This is far from empirical data, but I have created 6 worlds now and none of them start with anything close to a flat surface at the spawn zone. In fact, the world generation seems much more apt to create some very rough terrain than I recall in the PC version. I wonder what your experience with your maps have been, does the game spawn you a uneven forest zone? Terraria on PC could create some really unique forest topography but much of it was flat that contained some up and down, on mobile that doesn't seem true.

If you love Terraria and want to play it anywhere, Terraria on iOS is for you. So far Terraria has been ported to PS3, XBox 360 and iPhone and iPad. Clearly porting the game to other platforms is possible so I really hope to see it ported to Mac and Linux someday.

I was going to write up something just like this in a few days once I had more time with it and tried some boss fights. I had a bad experience with it the first day, but I kept with it and I'm glad. It takes some getting used to, but it's great for when I want to kill some time. I've mentioned before that I don't play many mobile games except time-wasters like Jetpack Joyride and Angry Birds, but this fills that role and actually feels like a real game as well.

The controls are clunky, even after you get used to them, but they're serviceable. I put blocks where I don't want them pretty frequently, and I can't imagine fighting Skeletron with them. We'll see how that goes.

I played the PC version some to compare and contrast, and I disagree that on PC you *must* build a house the first night. It's timed well so that after you've spent the day collecting the materials you can use the first night as a chance to build out some of your basic needs, but it isn't entirely necessary. I ended up collecting fallen stars my first night. That said, it wasn't exactly easy. On the iOS version, it's much easier to pull off.

The player emitting light was an interesting choice. I actually prefer it for iOS. Placing torches frequently needs some precision controls, which you don't get here.

Resources are definitely more plentiful, which is good, as you said, because I don't want to put up with the controls long enough to find them.

I do like automatically moving over terrain, and I'm glad that's coming to the PC version as well (for one block, anyway).

Your non-empirical data is pretty empirical. I've seen that complaint all over the place since it dropped. It's quite annoying, I feel like unless I fall into a pit I shouldn't get fall damage just from walking left or right. It did lead to a more interesting build for me, though. My spawn point was in a very jagged snow biome, so I ended up building a snow block fortress in the center of a snowy hill rather than a rectangular thing like usual. It's bad design, but at least it led to some creativity.

So yeah, I agree with you. It's as good as an iOS port really can be I think, but it still isn't *real* Terraria to me. This doesn't bother me at all, though, because I still have it on PC.

Good (or not) to hear that other people have seen what I have. I hope they roll out a patch to fix it up, it sucks to exist in a world that is so uneven. I'll just keep generating worlds until I find something with a more manageable surface.

That said, you should post how the later game goes for you. Sounds like you are further into the base game than I am as I only just started harvesting gold and don't even have a full iron set of stuff yet. Just poking around trying things out and collecting stuff.