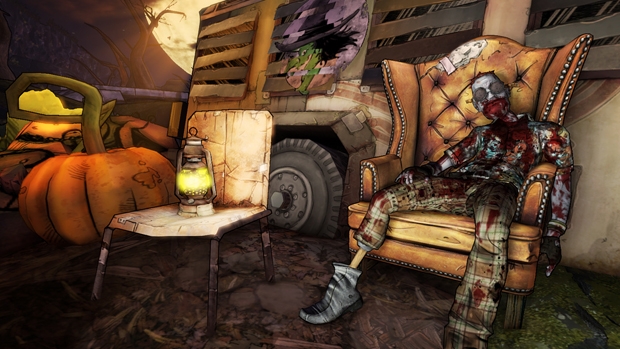 "Our incredible fans have been flooding our inboxes, telling us they want more Borderlands 2 content. We heard you, which is why back in August, we announced Headhunter 1: TK Baha’s Bloody Harvest, the first of the downloadable Headhunter add-ons. Today, we’re happy to let you know that TK Baha’s Bloody Harvest will be hitting Xbox 360, PlayStation 3, Steam and Mac on Tuesday, October 22nd – just in time for Halloween!

These Headhunter add-ons offer additional adventures that set you off on a series of missions in new areas that culminate with you taking down some rather unique bosses and claiming their heads to wear as your prize."

It seems Gearbox isn't getting off the DLC train with Borderlands 2 quite yet. Really like the concept of this DLC as it seems to add enough new content for hardcore BL2 players but also seems compelling enough for armchair players to play in smaller bursts. Since Borderlands 2 has been given the Game of the Year treatment I wonder if they will put out a "Even more Game of the Year Edition?"