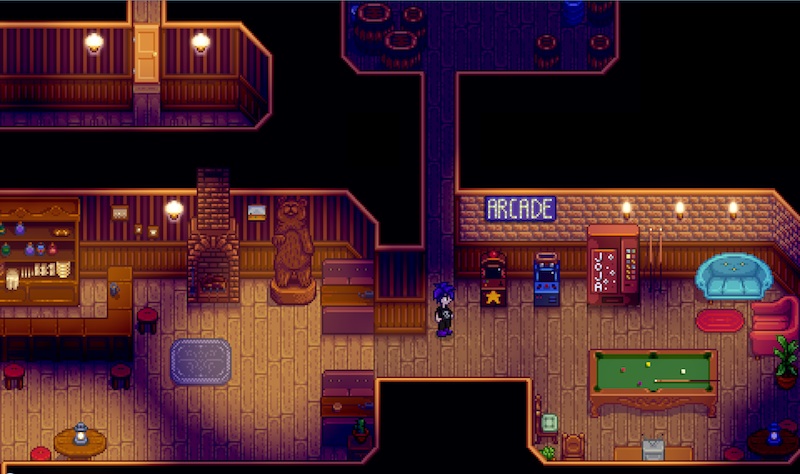 Stardew Valley is one of the games I am very excited about launching this year. ConcernedApe pushed the release from 2013 to 2014 and considering how big the game has become, it makes sense that happened. I appreciate that Stardew Valley isn't a game that focuses on a cosmic struggle of good and evil that spans the universe and instead is a more simple country life game focusing on growing crops and hanging out with your neighbors. I also appreciate the attention ConcernedApe is paying to the relationship "quest lines" and story. Many games tack on relationships but they are so ham-fisted and trite they aren't that compelling as great game elements.

"There are 10 “eligible” characters in the game, 5 females and 5 males (Yes, same-sex marriage/relationships are allowed!). Each one has at least 5 “events” which you’ll encounter as your relationship with the character progresses. Most of the events include conversations in which you can choose between different dialogue options. Sometimes the option you choose will affect how the rest of the event plays out. In addition to conversation options, you’ll sometimes be given a choice between multiple courses of action, which always has an effect on how the event plays out. Sometimes, choices you make in events will affect what characters end up doing in the future. Characters that you can’t marry also have these event cutscenes, but typically not as many.

I’ve been carefully going through every one of these events, adding or rewriting dialogue, new animations, props, cameo characters, settings, storylines, graphical cutscenes, sounds, music, and more! I also added a lot more cases where your choices affect how the rest of the event plays out. Additionally… while working on these events, if I encounter anything else in the game I am unhappy with I typically take a small detour and fix that as well."

Stardew Valley is a game that will primarily launch on Windows but there is some good news for Mac and Linux users as ConcernedApe has mentioned a possible Linux and Mac port of the game.