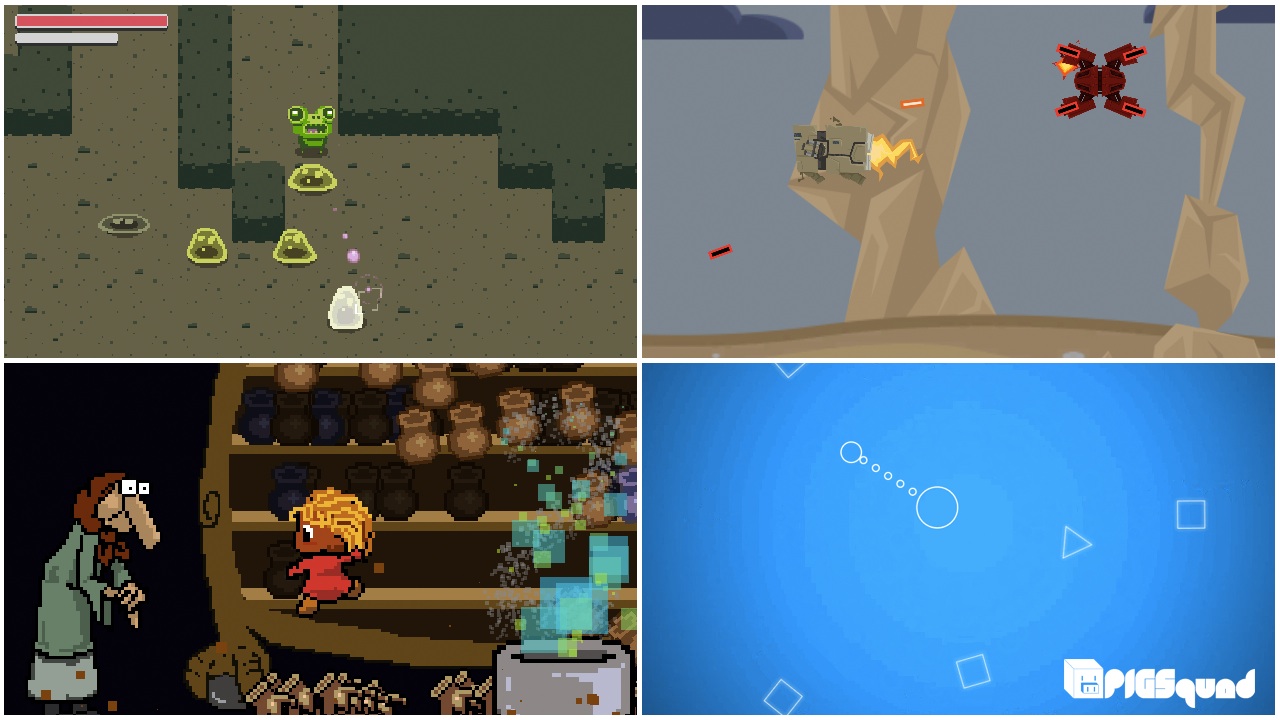 Cheerful Ghost was a sponsor of this years PIGSquad Mayhem Game Jam. The Mayhem Jam gave game makers of all experience levels, skills, and backgrounds a 48 hour opportunity to develop a new game amongst friends. I was able to make it for a bit of the Jam and was pretty impressed how people quickly met up and worked together to create interesting stuff. Will Lewis, founder of PIGSquad collected all the games and you are about to read a mini-review of each of the games.

There were 8 games made at this years Jam and we decided to split them up into two posts. If you are interested in any of the games from the jam, feel free to click the link for each game, give it a try and drop your thoughts in the comments.

Mother of Mayhem is a fun top down shooter where you are a frog on a quest to save your people from the slime overlords. Gameplay is in the 2D top down perspective and you can shoot in any direction you can move. Your shots are bound to your energy level such that you need to decide the right time to shoot carefully. As your progress through the game more slimes spawn as the game quickly ramps up in difficulty. Mother of Mayhem is a really challenging game but who said saving your people from the slime overlords would be be easy?

Starventure is a beautifully challenging spaceship Shoot Em’ Up. You use the mouse to control the spaceship and the firing is done automagically. At first I thought the auto-fire mechanic would bother me as most shooter games let you do the shooting. As I played the game the challenge wasn’t in landing the shots, it was in navigating the level to stay alive. Since I am an avid completionist I wanted to kill each and every enemy I encountered. This seemed like a bad strategy as I died. A lot. Eventually I landed the winning formula of simply navigating around the bad guys to avoid taking direct damage. As I came to the final boss my strategy for beating it was to kite it while avoiding the shots. I eventually beat the boss but it was a bare knuckle fight to the end. I’d love to see more of Starventure and hope someday I can.

Kuzi Mayhem is a very charming game where you play Domovoi as he helps his host make her concoction. As you take control of Domovoi, you can move side to side on a shelf loaded with bottles. You use Domovoi to catch the bottles from falling as you allow the purple ones to make your hosts concoction. I laud Kuzi Mayhem for using the music, art and gameplay to craft a very simple and fun experience. Where the introduction sequence was hard for me to understand, the experience of quickly moving to collect bottles was so great I was lost in it.

Check out the thrilling conclusion in Part II: