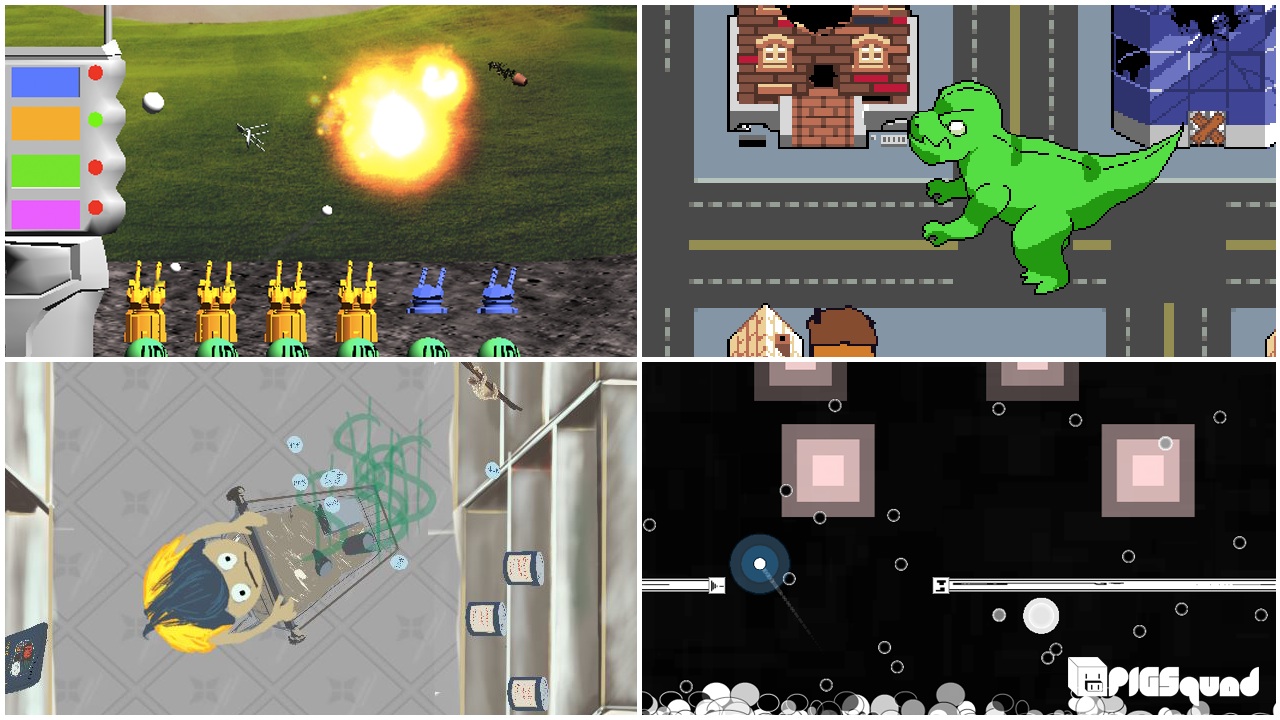 Mothership of Mayhem is a missile command style base defense game. As objects fall from the sky you must shoot them down to protect your base. As things fall you need to time your shots properly so you can hit the falling debris. This sounds a lot easier than it is and I found myself frantically clicking to clear the ever increasing waves of spaceward refuse. You get a limited amount of ammo so you must keep that in mind as you blast away, making each bit of the game more intense.

Giant Rampaging Monster is a game that delivers on the promise of it’s title. You take control of a Giant Rampaging Monster as you walk around town demolishing everything in your path. As I played this game I realized how much I miss Rampage and how badly more of these games need to be made. Giant Rampaging Monster not only allows you to destroy buildings with ease but it also puts a faux Twitter feed at the top of the screen. As you bring carnage and destruction to the city you can see how the city responds on Twitter. Many of the tweets are funny as people wonder about the monster in “How can it’s bone structure support it’s mass” and other Tweets feature the local news that note a local “Tornado warning upgraded to Giant Monster.”

Parenthood Simulator is a game that is fun and disturbing all at once that features two player head to head gameplay. One player takes the role of the grocery shopping Mother trying to stay on budget. The other player is the child who needs to throw items into the cart to make Mom go over budget. I found myself really enjoying the mechanics of playing as the child, running around tossing food into the cart. I played this game with Lucas, one of the games creators as he was the Mother frantically swinging her arms to keep food out of the cart. If there is an open question about times where children are pitted against parents, Parenthood Simulator is a game that takes the affirmative.

“...And she opened the box containing all the evils in the world” is the opening line to Pyxis, a dark breakout style game where you allow hope to escape while containing evil. In Pyxis hope is represented by a blue orb and evil are a bunch of grey orbs. Stopping the orbs from escaping are a few flat lines you can control with your mouse. Moving side to side moves the lines and moving the mouse up or down increases or decreases how far they are from each other. The simple premise and controls really make for a great game that can last quite a long time. Pyxis has a really good tone conveyed well through it’s gameplay art, writing and music. The game runs great on the PC but I could see it working just as well on phones or tablets.

Please check out the first part of our coverage of The PIGSquad Mayhem Game Jam 2014: