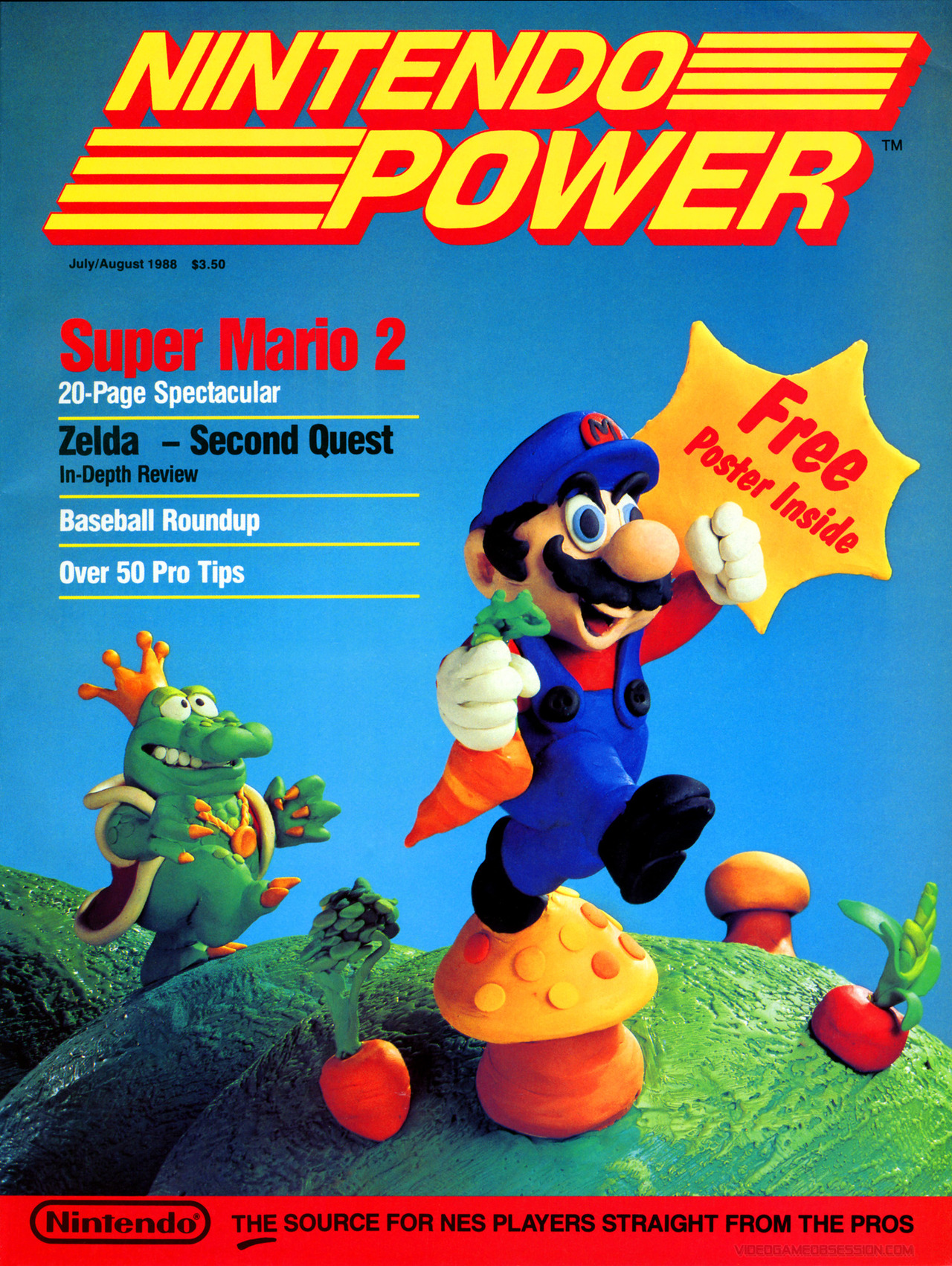 Nintendo Power's first issue was released for free to certain fan club members and in stores July of 1988. At the time Nintendo was gaining more and more traction as a pretty big household staple and to further it's reach they decided to start one of the greatest things to happen to the late 80's and 90's, Nintendo Power magazine. I first read this issue at my cousins house and immediately wanted a subscription. Nintendo Power was filled to the brim with comics, news and tips for all the games I loved. I have recently started re-reading them and decided to review them as I have time.

Nintendo Power issue 1 contained some of the best art on a magazine cover I can think of. Featuring a clay scene of Super Mario Brothers 2, Nintendo Power issue 1 contains 20 pages of Mario 2 walkthrough magic. This issue also features a really interesting walkthrough for most of The Legend of Zelda second quest. The Zelda second quest walkthrough doesn't cover the last few levels of the game but follows up with the remaining information in issue 2.

Nintendo Power featured a fold out poster in each issue and I enjoyed putting the cool ones up on my wall. This issue shipped with a poster for Super Bases Loaded which ranks it pretty high in terms of the most lame posters featured in Nintendo Power.

Counselors Corner has tips for a few released NES games such as Metroid, Ghosts and Goblins and Super Mario Brothers. I am curious how well known certain video game secrets were before Nintendo Power published them. The infamous Super Mario Brothers 1-up trick is featured in this issue but I remember first hearing about it from a friend.

One staple that I loved was the Howard and Nester comics. Howard was the comic character from the real life Howard Phillips, spokesman for Nintendo at the time. I am not sure if Nester was based on any real life person, but he was always snarky and fairly prone to doing dumb stuff. I always enjoyed reading each comic even though they don't hold up as well as my memory of them.

Issue 1 goes on to drop the classic Konami code for Contra and provides information and walkthroughs for Gauntlet, Double Dragon, Contra & Jeopardy. The last bits of the magazine feature some interesting fan letters and the Top 30, a list of the most popular NES games. As issue 1 shipped, the top 5 NES games were The Legend of Zelda, Mike Tyson's Punch Out, Metroid, Super Mario Brothers & Kid Icarus. As Nintendo Power continued on and other games launched this list changed a bit, but Zelda was nearly always at the top of this list even after the Super Nintendo launched.

At the time this issue shipped an entire year of Nintendo Power cost $15. This seems like a steal now but at the time was something I didn't have an easy time doing. That said, it didn't stop me from reading as many issues as I could get my hands on.

I miss Nintendo Power! I thought it was always excellent and the best. I only briefly had a subscription many years ago.

My only remaining request is that Nintendo releases all the back issues in some form of DRM free download.

That would be sweet!

Posted about 44 minutes ago
Read