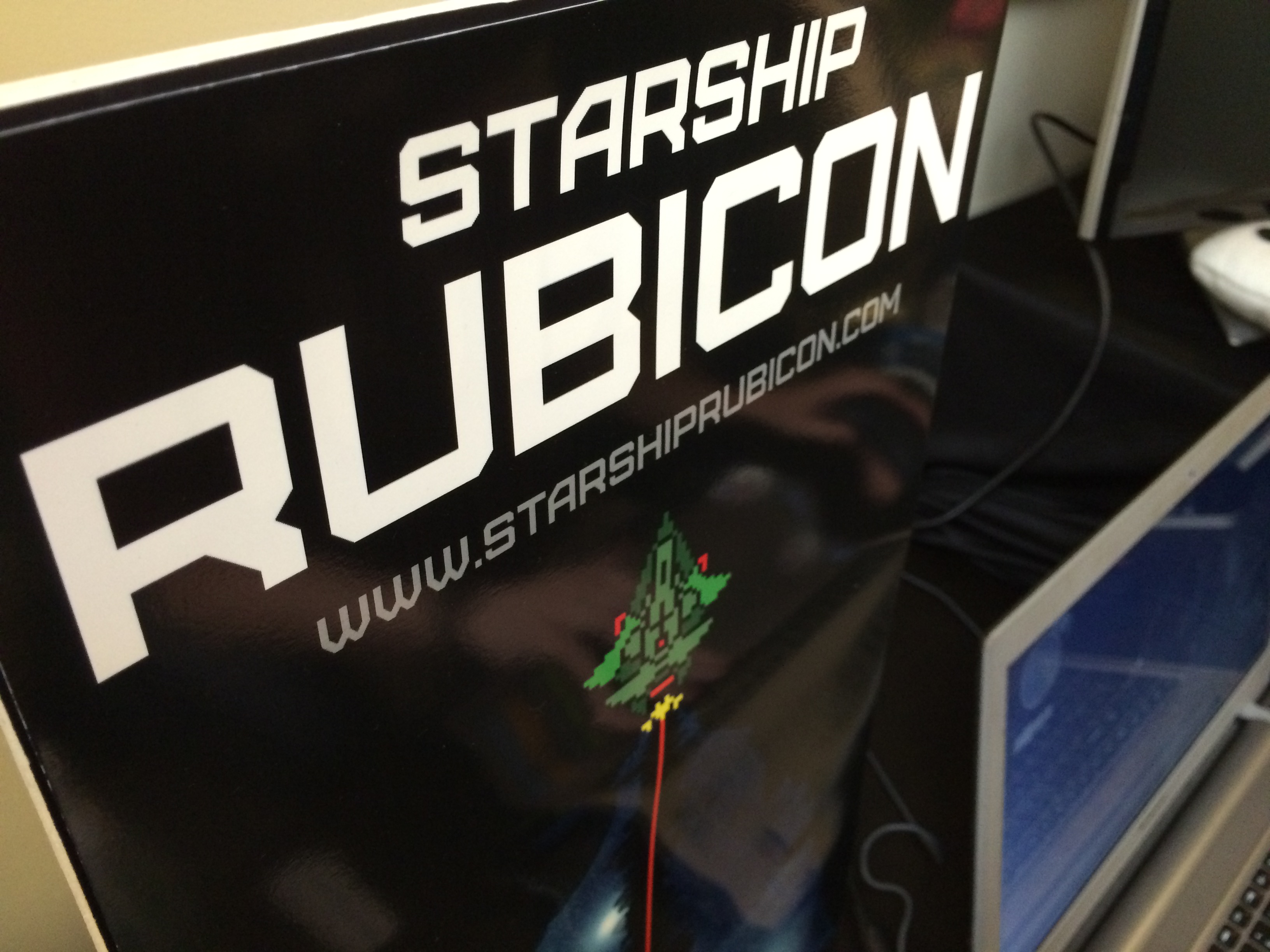 I spent this last Saturday at the Eugene IndieGameCon doing a split Cheerful Ghost and Starship Rubicon booth. Since Starship Rubicon is the first game Cheerful Ghost is publishing it makes sense to show the game at a booth together and this was the first time we did it. It's one thing having a table at an event for a video game community but it's something very different to show off a game. I was also really excited to see people responding well to the build of the game we had to show. After the first few people ran into a steep difficulty wall, Wick balanced the game and everyone that came afterward had a bit easier go of things. Some people did very well, some people died quickly but nearly all the people that played it had fun.

Wick and I have boothed at a lot of Portland events and really enjoy doing it even if each event doesn't get a huge turn out. I wasn't sure what kind of audience to expect as IndieGameCon was in Eugene Oregon and I am not too familiar with the video game scene there. That said, the event was packed all day long with people very excited to play all manner of games shown. I had to get out of the way as the crowd around the game was too thick for me to be as close to the table as I wanted to be. If you are into the Indie Game scene in Oregon, IndieGameCon should be on your list as one of the events you need to be part of and I want to thank Ted Brown for letting us be part of it.

Later that evening Wick and I headed to the after party at a local club called the Shoryuken League. It's a retro arcade bar that has a few cool arcade games. Wick and I started playing a few fighting games but the highlight game of the evening, for me, was Duck Hunt. I am happy to admit, I spent a lot of time playing Duck Hunt as a kid and specifically the clay shooting portion of the game. I finished the night with a high score of 566,500 which isn't anything to be ashamed of and by the time I left wasn't surpassed. I went over to the Twin Galaxies high score page for Duck Hunt and whereas the high score is for two ducks mode, if I have more time and will I might try and get in on that action.

I also want to give a special shoutout to one of my friends Nic Biondi and his game Hard Lander. Nic is still adding awesome stuff to Hard Lander and each time he shows it the people that play it have more and more fun. Hard Lander is a physics based multiplayer space ship game that is absolutely off the hook crazy fun in multiplayer with friends. Some people had so much fun they camped out playing the game for hours and screamed in excitement when something crazy happened(I know because I heard them on the other side of the room). Hard Lander is on Steam Greenlight right now and is something the world needs so upvote it on Steam.

View the full Imgur album of the event here as well as images to prove my Duck Hunt high score: