Last night I went to the Magic: The Gathering Avacyn 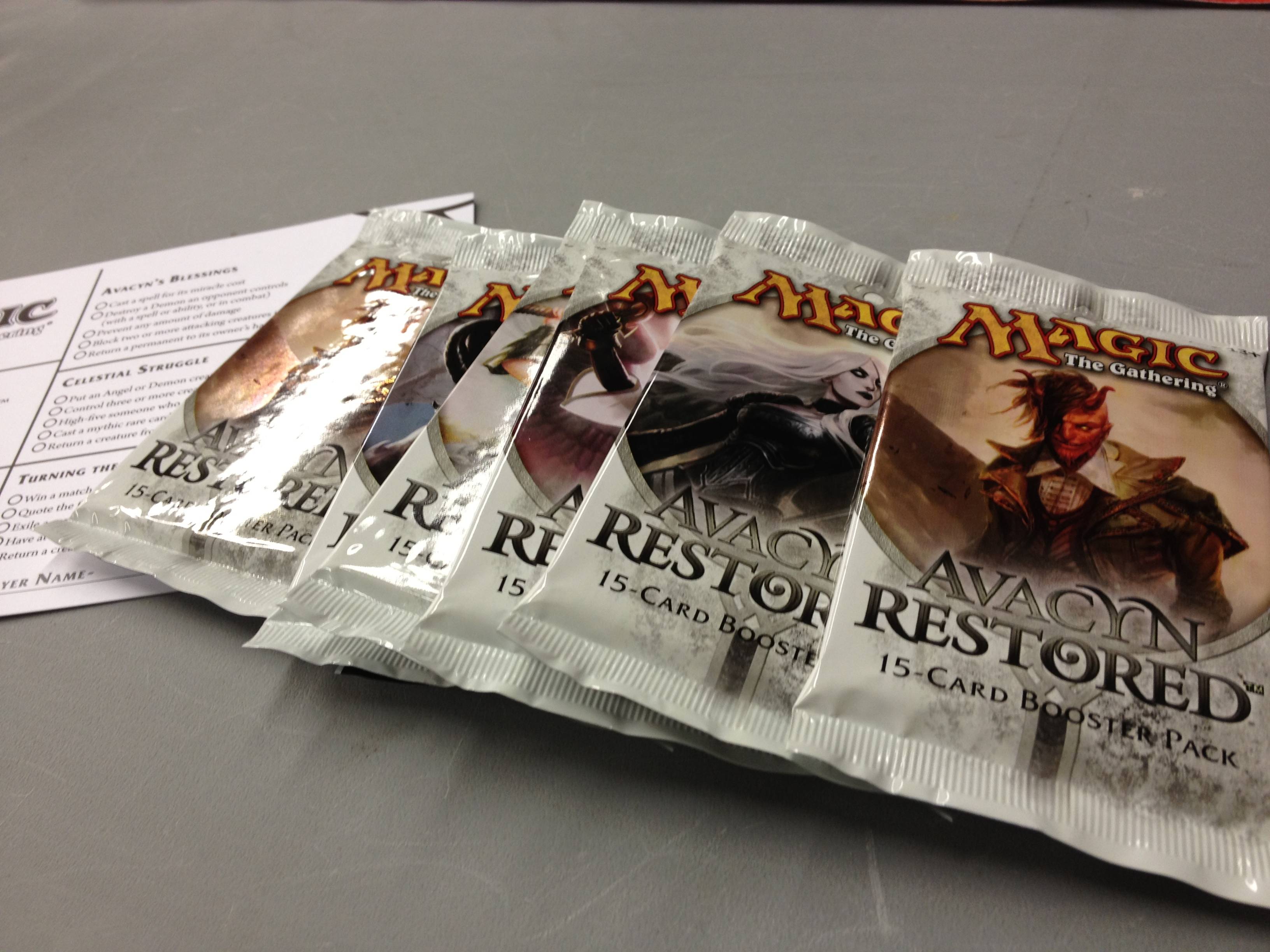 Last night I went to the Magic: The Gathering Avacyn Restored pre-release party at Red Castle Games in Portland.

Red Castle Games is a pretty cool games store. It has a very large selection of awesome board games ranging from Settlers of Catan, Arkham Horror, Castle Ravenloft, Pandemic and others as well has a hefty supply of Magic, Pokemon and other collectable cards. It also has a farily large set of games you can pull of the shelf and play if you want. One such game, Hero Quest caught my eye as it has been out of print for quite some time. I asked at the front if it was for sale as its hard to find and alas, it was not.

My friends arrived and we started with a card game I was unfarmilar with called "We Didn’t Playtest This At All." The game is pretty awesome but winning is pretty random as the cards range from wildly overpowered to useless. Then again, I guess thats the point entirely.

After a few games of "We Didn’t Playtest This At All" we moved into a few hands of Magic. I won a few and lost a few. According to one of my friends my Goblin and Elves dueling deck is worth quite a bit due to it being rare. Odd, I just picked it up round 2007 for about $20. Come to find out, it is worth about $150 new.

The sealed deck tournament started around 12p and I opened my 6 packs around 12.30p. I created a rather safe Red and White deck with the cards I had. I had a few Humans and Angels so I decided to construct for those bonuses with my Instants and Enchantments. Turns out going on the "safe" side was bad because I handily lost my first two matches. Doh!

7 hours into the tournmanet and 2 straight losses(each round is the best 2 of 3 games) I decided to call it an evening at 3.30am. It was a pretty fun experience meeting people and watching how people play. I have to say there are some really great Magic players out there and I am a beginner in comparision. Stil, learned a bit about some new to me card mechanics like miracle cost. Since I attended the pre-release I got the special Moonsilver Spear foil. Its pretty overpowered and as such will add to one of my decks :)

Very fun and I plan on doing it again in the future. I am going to hang out with one of my friends and go over the cards I picked and figure out a better strategy to constructing a deck. According to the guys I went with I had a pretty solid set of cards but I needed to go a different direction. When the deck is worth showing, ill list the build here.


More Pictures of the Evening:

It's just so weird to see people referencing Star City Games all over the internet. That's about 45 minutes from here, it's where I went a few times to grab booster boxes back when I was playing more since they're way cheaper than anywhere else in the area, and... they're apparently one of the major MtG authorities on the Internet.

You'd expect the place to be a massive warehouse, but it's mostly just full of tables for tournaments, with all the goods behind the counter taking up less space than most small hobby shops.

Awesome, they just came up after a quick Google for the Goblin and Elves dueling deck. Cool they built up their online portion so well!

A co-worker was telling me recently about pack wars. You take a booster pack, two lands of each color, shuffle it all together, and that's your deck. Optionally, no peeking before the game starts.