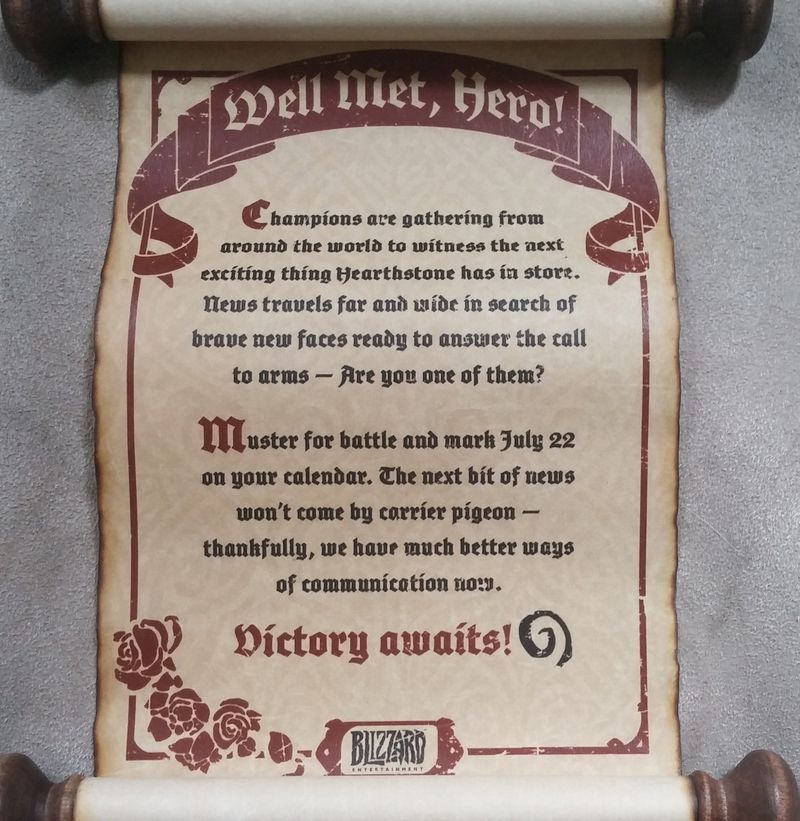 Blizzard sent a package to a few popular video game websites (not us, booo) teasing a new Hearthstone expansion coming July 22nd called "Agent Tournament." In the image linked above from Polygon the scroll reads:

Champions are gathering from around the world to witness the next exciting thing Hearthstone has in store. News travels far and wide in search of brave new faces ready to answer the call to arms — are you one of them?

Muster for battle and mark July 22 on your calendar. The next bit of news won't come by carrier pigeon — thankfully, we have much better ways of communication now.

So what are you most excited for? A full new adventure or a new set of cards? Both? I started playing Hearthstone regularly after it dropped on Mobile so I have a ton of cards yet to get and I haven't even started opening Goblins and Gnomes packs yet. I unlocked all of Naxx and got the first tier of Blackrock so I don't "need" the new content but I bet other players are absolutely itching for more things to do.

What are you looking forward to coming out July 22nd?

I would be interested in more than just another single player expansion with new cards. (also they haven't been spoiling new cards...so that might not be it). I am looking forward to future tribal expansions (they did the goblins and gnomes which gave us mech-decks) and I think an elves and dwarves would be a possibility or something.

But for me, I'd enjoy a new mode similar to arena. I like the drafting style presented there and the fun decks you can make from it.

But how about another mode that's similar. Instead of picking 1 of 3 cards til all 30 are there, you are shown 60 cards and you choose all 30 at once. Or maybe a 4-player mode. That could add some spice. They have a lot of potential with this game as it plays so similarly to magic, yet quick and easy.

So, I guess I want a new game mode that actually matters. I do like the brawl, but I feel there's so little reward to doing more than one win. I am at 14 now for this one because it's fun. But I'd enjoy a new tournament mode or something that can generate more prizes. One of the things I love about arena is the random decks and the chance for great prizes. (Free golden cards for getting high enough wins).

A new game mode seems sorta unlikely with brawl just getting released, but new cards also seem unlikely with no spoilers leading up to it.