My Review Of The Android Handheld GPD XD 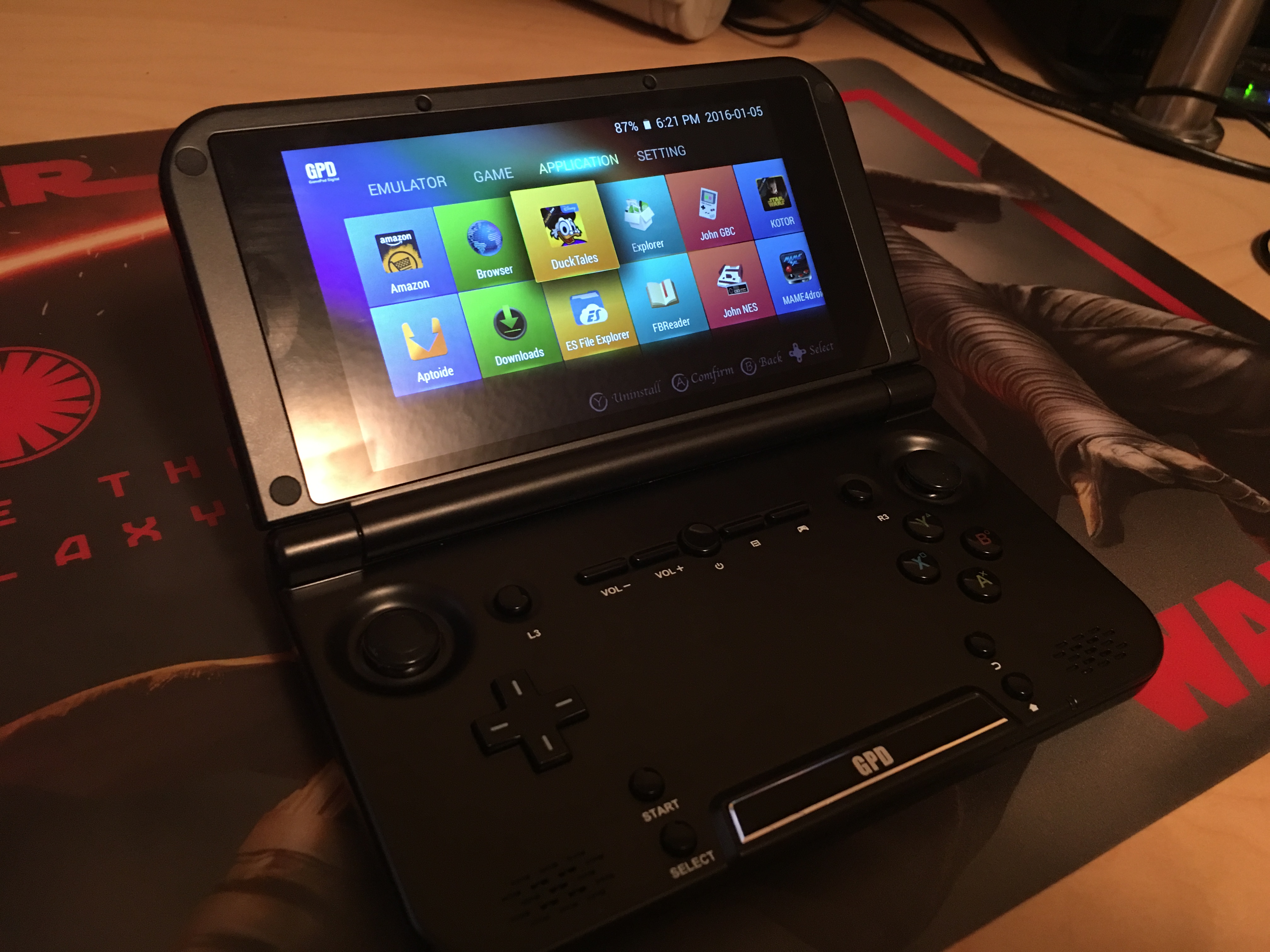 Some games are fantastic on smartphones. Hearthstone, Flappy Bird, Monsters Ate My Birthday Cake and Skullduggery are all good games that work well when you tap around your screen. There are also entire genres of gaming that are not served well on smartphones. First person shooters, real time strategy and traditional platformers are not great with tap controls. Because of this i’ve been searching for a handheld gaming system where I can play a different variety of games. In the last couple months I picked up the GPD XD and it’s one of the slickest gaming devices I own.

The GPD XD is a Chinese made Android handled that resembles a Nintendo DS. The GPD XD sports a Quad Core 1.8 ARM CPU, 16GB of storage and 2GB of RAM. It has the clamshell hinge, two full analog thumb-sticks, a directional pad, X/Y/A/B buttons as well as two trigger bumpers for each index finger. It has a volume toggle, on and off switch as well as ports in the back for headphones, usb power, a micro SD card and HDMI mini out. It runs a GPD semi-custom Android build that sports a strange UI that you can change if you want. It’s a fully unlocked Android 4.4.4 device so you can install anything from the Google Play store or any Android app through an the .apk format. From my initial usage the battery seems to last about 4-6 hours and it has a relatively quick recharge cycle. The battery lasts a bit longer if you turn off Wifi and turn it off when you are not using it as the sleep cycle seems to drain the battery.

The specs are actually pretty solid for a handheld device but the most powerful gaming device is junk if you can’t play any games on it. Needless to say the GPD XD comes loaded with a ton of games over the Google Play store and some are tuned well for a traditional controller. I’ve downloaded Duck Tales Remastered, Knights of the Old Republic and Sword of Xolan and they all work amazingly well with the controller. I obtained those games for free on Amazon Underground as Amazon has a special deal with certain games to provide them to the player for no cost. It’s an interesting model Amazon is trying and I am not sure how it works for the game developers, but as a player it’s pretty solid. Only a couple Android games work with the controller and I imagine as more games are optimized for AndroidTV, the landscape will get much better here.

That said, playing Android games isn’t the only thing the GPD XD can do and one other big use case for it is Emulation. I have a ton of physical Nintendo, Super Nintendo, GameCube and Wii games and it’s nice to be able to play them wherever I want. It’s also nice to use only one device to play them all. The GPD XD emulates the Nintendo, Super Nintendo, Gameboy, Gameboy Advance and PSP with ease. It falls down on DS emulation but since I don’t have many DS games it’s not a huge problem. In world where your NES and Gameboy cart batteries die, it’s nice to be able to load up the game on a device that will never suffer that fate. It’s also nice to be able to switch between Gameboy Tetris and Secret of Mana in a couple seconds.

Since the GPD XD is full blown Android you can use it for pretty much whatever you can think of. Want to output the XD to your HDMI monitor and plug in a keyboard and mouse and use it as a sort of PC? You can. Want to attach it to your TV and connect a USB controller? You can. Want to watch a movie on it? Yep. One of the big problems I have with buying tech is buying into an ecosystem that doesn’t allow you to use in whatever context you want. I love the hell out of my iPhone but it’s annoying I can’t always use it in the ways i’d like to. These unlocked Android devices really allow that and I think it’s a huge bonus.

One other killer feature of the GPD XD is Moonlight. Moonlight is an open source project that allows you to use NVidia streaming to play your PC games on any device that can run Moonlight. Since the Moonlight developers have a great Android port Moonlight runs well. What this means is that I can stream Fallout 4 to my GPD XD from anywhere in the house. Well, Fallout 4 or any other PC game I have. Someday I hope Valve releases a Steam in home streaming client for Android and iOS but until then, Moonlight works amazingly well.

The GPD XD is a great device if you are interested in the fledgling Android controller games market (like I am) or want to play your retro games in a more convenient context without rebuying. Since it’s a Chinese designed and made device it suffers from some odd translation and usability decisions but if you can hack your way around Android, it’s not a problem. In the end if you are looking for a device that is open and hackable with a traditional control set the GPD XD is for you. If you are looking for a place to play the latest and greatest Nintendo or iPad games, you should stick with what you already have.

That sounds like a really cool device. One of the problems I have with my Kindle Fire, although it's a tablet and not this kind of device, is that I do not have easy access to Google Play. In fact, I'm missing out on many Android games and apps. I'm looking into Amazon Underground to see if it's compatible with the Kindle Fire. Honestly, I can't think of any games that I really want that I don't already have, but I'm also not aware of very many. I have a bunch of Angry Birds games along with Minecraft and Terraria. I also have Words With Friends, Scramble With Friends (now Word Streak), and What's That Phrase. My son has a bunch of other free apps.

Back to the GPD XD, again it sounds like a really cool device. I don't think I read anything in your review that I didn't like about it. As for the translation thing, I'm sure I could figure my way around it and how to use the device simply by searching Google.

Thanks for posting a cool review about a device that sounds really neat!

Dude, that sounds really rad. I'm surprised I've not heard you talking about this before now! I want to check it out :)