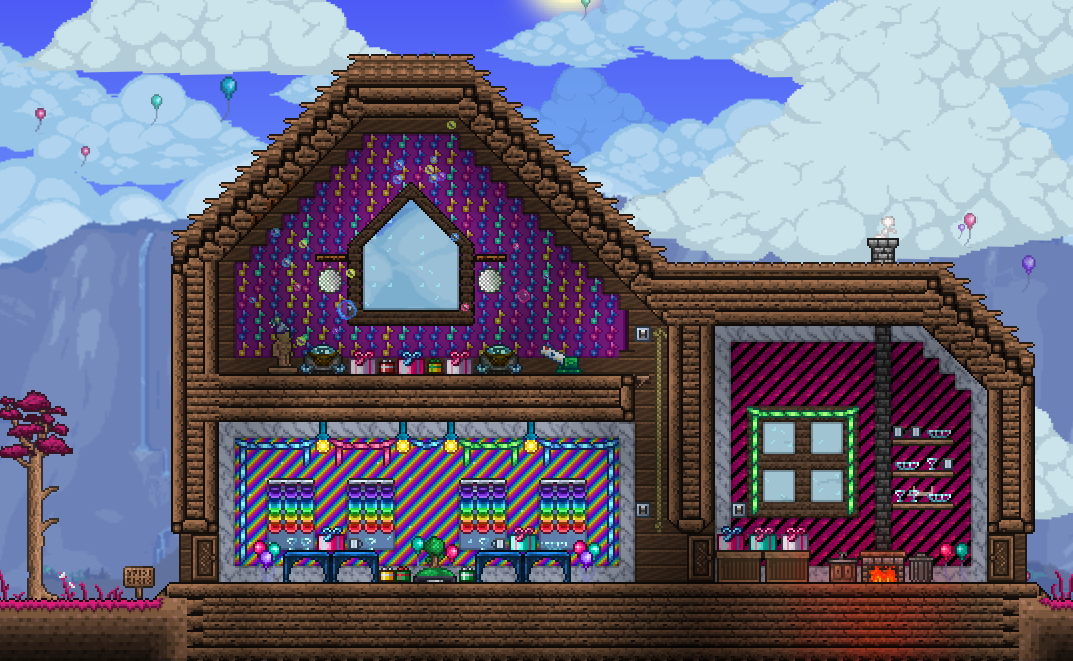 Have you always wanted to have a party in Terraria? Well now the Party Girl or certain other NPC's will throw one under certain conditions you set up. As with any new feature, they don't say what they conditions are but I imagine it will come to the wiki at some point.

When we run our next server we should throw a party.

I'm not really interested in the party update, but I really like this picture! I also love the "when we run our next server" part of your post here! I miss playing Terraria with my fellow Cheerful Ghosts. Our next server should definitely be on Expert Mode. I'm confident that we can handle it together.

Yeah, expert mode isn't a bad idea BUT the downside is it discourages a bit more casual play as it's hard as hell. PLUS if people come in after we've played for a bit, they will get steamrolled by hardmode.

That said, expert would be fun!

Well me and Vinny together have done pretty well on our Expert mode world, surprisingly. I've enjoyed almost all of the Expert mode rewards, but not all of them. The Slime mount most definitely helps against Eater of Worlds, although that's not the Expert mode reward. That one makes slimes friendly, even if you attack them. The Bee Gun is a great weapon against Skeletron, although again not an Expert mode reward. I've defeated some of the Expert mode bosses on my own, but not all of them. We haven't gone up against the Wall of Flesh yet, but they're definitely tougher. I think we were only able to defeat King Slime because we had a nearby hole in a hill where he couldn't get to us, but we could hit him with boomerangs, although his slime companions came after us. Still, with two or three of us with the right gear and the arena we usually use, we should be good. But yeah, it would be more difficult for casual play and those who join in late or don't play much, I can see that as an issue.

Oh and since we're talking about our Terraria server again, I have to ask, "when?" LOL

> Oh and since we're talking about our Terraria server again, I have to ask, "when?" LOL

I'm not sure. My first off the cuff thought is sometime this holiday. That seems to be a good time for folk, but i'll defer to Travis here.

Honestly I just don't have the interest yet. Holiday sounds like a good time, but maybe sooner?

terraian_warrior: The console versions and updates are handled by an outside company so Andrew isn't directly involved with that. Plus, I think he is working on Terraria 2 or another Re-Logic game and isn't on Terraria proper anymore.

Oh wow, I can't wait for those!

An interesting environmental change. I wonder if they'll just be purely cosmetic or if perhaps they'll give a debuff. It does snow instead of rain in the snowy biomes, but a blizzard would be cool. Maybe they could add hurricanes for the beaches, too.

I know the next update has to do with the underground desert as can be seen in one of her other tweets, perhaps even on the forum and wiki.

Hurricanes at the beaches? How bout a TSUNAMI? Not that I spend a lot of time on the beach in Terraria as its so far over to the side.

Haha @TheFluBomb tweeted: @Cennxx @Terraria_Logic is this gonna be the "Stuff Blowing In Your Face" update?
They should give the other biomes similar treatment. Equality for all! It'd be cool if they did some leaves for the forest biome, maybe that could just be a Fall holiday environmental event.

Still impressed how much work this game has received post launch. I wonder when they will consider it "done?" I'm not complaining, it's just that all this new content is usually saved for the sequel.

I guess it's like a regular Sharknado minus the sharks. And more sand.

I wonder if it throws you above the world like the one in Super Mario Bros. 3?

But damn, those particle effects! With these new weather effects and the stuff surrounding the Moon Lord, they've kinda gone up a generation or two in graphic styles. It almost looks a little weird to see that high def (for lack of a better word) sandnado in the pixelated world.

Yeah it all looks good, but I agree with Jon's comment after mine. I was going to say that all this is nice, but I'm more eagerly awaiting Terraria: Otherworld and Terraria 2. I want more Terraria damn it and other games just aren't up to par. LOL