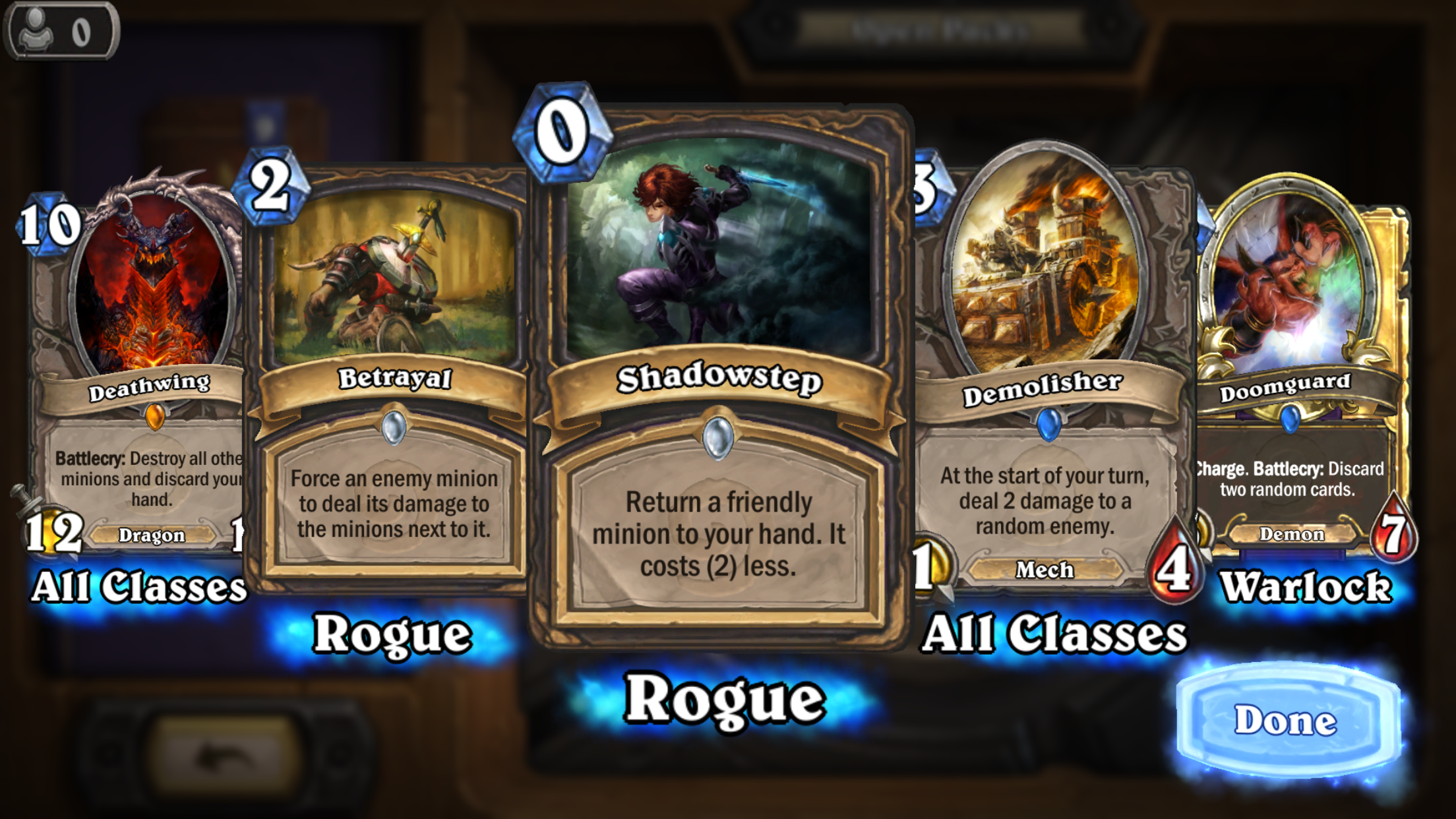 Today Blizzard released a new Hearthstone game update featuring the Welcome Bundle. The Welcome Bundle is $5 and can only be purchased once per account and contains 10 classic packs and one random class Legendary. This is a really good way for new players to pay a bit and get some cards for cheap. Most free to play games have this sort of starter pack and it's nice to see Hearthstone finally get one.

I am a pretty happy doing the Hearthstone free to play thing but I really wanted those packs and a shot at a cool Legendary so I dropped some Google Play credit I had from taking free surveys through the Google Opinion Rewards app. Am I still free to play because I haven't spent any of my actual money? I think so.

The class Legendary I got was the Hunter legendary King Krush. Krush doesn't see much play but it's a great card and I've wanted to build a Hunter face deck that uses him. Krush is a fun card but Call of Wild sees more play and since it's an epic you can include two. Looking forward to building a deck with Krush, Call of the Wild and as many charge cards as make sense to include. No idea if it will be good but it should be fun to play.

I figured since I have a ton of classic cards already opening 10 packs wouldn't contain much and I was happy to see that I was wrong. I opened two Legendaries from the 10 packs one being Deathwing and the other being a golden Lore Walker Cho. Deathwing is a very cool card but i'm not sure how I can use it right now. I decided to dust my Golden Lore Walker Cho and craft Tyrion Fordring instead. Tyrion is one of the best legendaries in the game and I've wanted him for quite some time and it was awesome to finally add him to my Paladin decks.

The other cards of note I opened were a Golden Doomguard, my second Earth Elemental, Lay On Hands and a golden Knife Juggler.

You can look at all the packs I opened below.

Curious what everyone else opened after they picked up the Welcome Bundle?

huh, I didn't know about this lol.

Sweet pulls for you! I've used King Krush in a hunter deck and he's still powerful as a finisher. He's not Tier 1, but flavor wise he's awesome and he can pack the punch.

And classic are still the best packs to open. Since they don't rotate, it's the best place to get all the legendaries and if they nerf cards, it will likely be from classic (as the wilds rotate and are less impacting), so you can get bonus gold for dusting nerfed cards (you get the full craft value.

I had a golden epic that got nerfed... was nice collecting that 1600 dust, so you never know. Classic has best value and longest returns imo.

I agree with you about that classic value as most of my crafted legendaries st this point are classic. My last lengebdaru I crafted before The Welcome pack was Ragnaros.

Cool you got Jaraxxus, that's one on my list for sure but I think the NEXT legendary on my list to craft will be Ysera.

Ysera was my first crafted as I played control priest pretty exclusively the first year of the game.

I'm pretty addicted to gold cards lol. I justify spending the money I do by saying I'm not playing magic anymore and I was spending $120/ month on magic on average. Every 3 months a new set comes out, I'd spend $210 on boxes of packs, plus $50 for pretelease events, and then likely another $100 on singles or a new play mat, etc.

So, hearthstone can eat some of that and I'm ok. Having all the cool cards makes it harder for me to stick to a deck tho and not play all the fun ones.

Like you caught me yesterday grinding beast Hunter. I really want to try to get legendary. My best is rank 5 with 5 stars (they take away win streak bonus at rank 5 it seems, btw). My matches are 70% shaman, 20% hunter, 5% druid, 5% warlock, .01% mage. So I'm SICK of shamans right now.

I also find I get rematches more often now, so that's funny.

I'm about 20 wins from 500 on Hunter. Might switch decks after to focus another class.

Also, OH MY GAED, I want that new priest!!! It better not be another device specific one. I'll be making a trip to Sprint if it is lol

The new Priest hero looks great. I wonder how we'll be able to get it?

Not too long ago I got the the point where I had enough commons, rares & epics so I could craft a Legendary. The first three I crafted were Sylvanis, N'Zoth and Twin Emperor Veklor. More recently Ragnaros and then these.

For my play style it makes sense to craft what I did but I REALLY want Ysera as it's such a cool card.

Here is the Hunter deck I made that features King Krush called "Face is the Place." It should really have two Call of the Wild's but I only have one of those. Basically it's a face deck with some answers to help clear taunts and big minions that make it hard to go face. The answers being Hunter's Mark & On The Hunt to take down anything big or a taunt as well as 2 Deadly Shots.

It's not too bad but Krush doesn't come up as much as i'd like but when he does it's nearly always the finisher that is immensely satisfying.

So now I have Priest, Mage, Hunter at gold. Think I might try druid next, at around 400 and been playing against a portal/yogg/N'Zoth druid deck that looks fun, so trying that.

Face hunter can be a fun change of pace for a bit. It's funny to me that I got it to 500 actually (I did play Dragon Hunter for a long time too tho).

Your list looks solid. I'd consider swapping out the Argent Riders for Toads maybe. a 2 drop 3/2 beast with a deathrattle vs a 2/1 charge/shield for 3 mana. Kinda depends, but in my experience, getting a minion out on T1 or T2 is key. You currently run 12 3-mana cards and only 7 2-mana cards.

Plus, 2 more beasts give you synergy with Kill Command and Hound Master. And with coin, the Toad is a great T1 play against any deck.

That's a good idea. The horses have mattered some when they had charge but the deck does not suffer much from having minions that have to wait a turn.

Also, congrats on the 500 ranked wins. Golden heroes are a fun achievement.

Thanks. kinda bummed now, I tried druid out a bunch and went from rank 4-5 to 8. Cannot find a good enough druid deck to play.